Mastodon, Google lands on the alternative social network to Twitter The rise of the app that welcomes those disappointed by Elon Musk continues 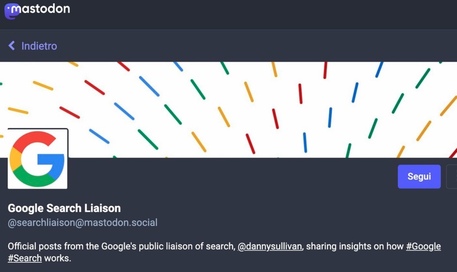 (ANSA) – MILAN, NOVEMBER 23 – A little less than a month after Elon Musk’s acquisition of Twitter, the stampede continues on Mastodon, an alternative to the microblog. If in recent weeks the app, for iOS, Android and computers, has seen the registration of 1 million new accounts, reaching just over 1.6 million, now it is the big names in tech who are interested in the project. Google has in fact opened an official account on the service, @[email protected], which already has thousands of followers. GoogleSearchLiaison is the same name used on Twitter by the profile dedicated to the technical operation of the web search tool, which will simply see a simultaneous post activity on multiple platforms, including Mastodon. Not new for the Mountain View company, which usually diversifies its presence on social networks, especially after the closure of the internal Google+ project, which closed its doors on April 2, 2019 without being able to worry competitors, including Facebook. Big G has long been present on Instagram, albeit with more direct-to-consumer content.

In recent days, Phil Schiller, head of events for Apple and the App Store, has deactivated his Twitter account following recent developments. Schiller often used his account to promote new Apple products, services, software and initiatives and interact with fans. As noted by Bloomberg’s Mark Gurman, the account had over 200,000 followers before it closed and was created in November 2008, exactly 14 years ago. (HANDLE).

Peugeot announced a novelty, on the roads from 2025

Jorge Asís analyzed the Peronist act: “It was not Cristina Kirchner’s best speech”