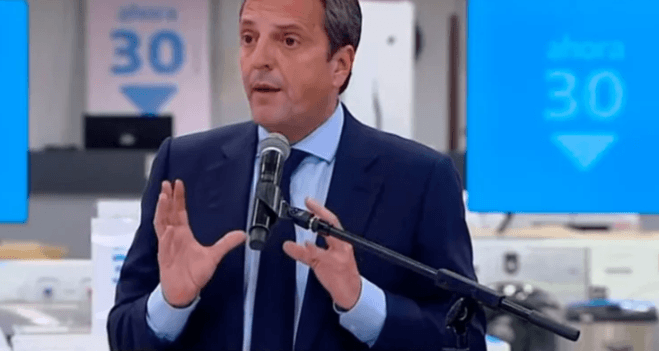 
Economy Minister Sergio Massa made official this afternoon, in a brief act, Now 30, the new official program for the sale of 273 electronic products – such as cell phones, air conditioners, televisions and others – in installments. He did the same with Now 42, a scheme that is aimed at retirees and pensioners.

“Caring for the consumption and purchasing power of workers is one of the Government’s great objectives,” said Massa, who also highlighted the “enormous industry that we should be proud of,” referring to the group of companies that manufactures household appliances. from Tierra del Fuego.

“Now 30 has fixed prices. Between now and December 22, each of the products that make up this proposal, this project, this program will have the same price”, assured Massa.

“This is the effort of the chains, the producers and the banks. It has no fiscal cost, it costs zero to the State. You pay half the interest on credit cards. There are 100,000 million that are being contributed to the program. It is an enormous level of financing,” said the minister, who stated that the new scheme also seeks to encourage “physical sales”, in addition to electronic commerce, to encourage the internal market, sales in the neighborhoods and “move the I work in commercial chains”.

In addition, the head of the Palacio de Hacienda invited more locals to join the 1,400 outlets that are already part of the program throughout the country.

“I would like to explain to you why Now 30. Why support consumption, support national production in fixed quotas? We have a task, a huge task, which is to lower inflation expectations. When we lower the programmed interest rate, when we lower prices based on setting a pricing strategy that removes that uncertainty, we also help with that enormous and titanic task that lies ahead, which is to lower inflation,” assured Massa, adding: ” The most important thing is that they are national products, which is national work. Think that we are talking, between the value chain of the electrical appliance sector and the commercial value chain, of 30,000 direct and indirect jobs, which are protected and strengthened”.

“From tomorrow, to be able to use it: fixed rate, 30 installments, 48% rate”, closed the Tigrense.

As explained by the minister, a list of 273 products of preselected brands and models will be sold in 30 fixed monthly installments at maximum reference prices: air conditioners, 4G cell phones, televisions over 50″ with 4K technology, refrigerators and washing machines. The prices will remain fixed until December 21 with a rate of 48 percent.

Also speaking at the presentation were Martín Insaurralde, chief of the Cabinet of Ministers of the province of Buenos Aires, and Matías Tombolini, secretary of Commerce.

“Now 30 is essential for commercial SMEs,” said the president of the Argentine Confederation of Medium-sized Enterprises (CAME), Alfredo González, after the meeting. “The commitment has to be from all the sectors involved. Therefore, we need banks to do their part by increasing card credit limits,” he added.

“Now 30 is a fundamental tool that allows the acquisition of durable goods that are manufactured in the country with very convenient financing. This public-private initiative results in benefits for consumers and protects Argentine work”, said the executive director of AFARTE, Ana Vainman.

Now there are 30 participating stores from all over the country that have physical headquarters, that is, small stores and large appliance chains that sell to the public with vendors, as well as supermarket chains. The businesses have to adhere and must select from the general list, those products that they are going to sell. This will allow verification of compliance with the agreements.

As Infobae explained today, the scheme can be used on CyberMonday, the day of online discounts that will take place between October 31 and November 2. “For some technology and electro products, this new installment plan may be incorporated,” said Gustavo Sambucetti, director of Institutional Affairs at CACE, the entity that organizes CyberMonday.

The CyberMonday products that can be purchased within the Now 30 plan are those domestically produced appliances, whose consumer prices do not exceed 200,000 pesos; and that in turn belong to the “White Line (air conditioning with inverter technology, washing machines and refrigerators), televisions and cell phones.

The UK has a new Prime Minister: Rishi Sunak

Video- “Are you gango”/ After the fight with Noizy, Clevio beats the dog, is investigated by the police

Cold borscht in five minutes. The expert shared the author’s recipe for the Ukrainian national dish