Marquez, diplopia is back: this is the disorder that will keep him away from motorcycles (and what the doctors say) 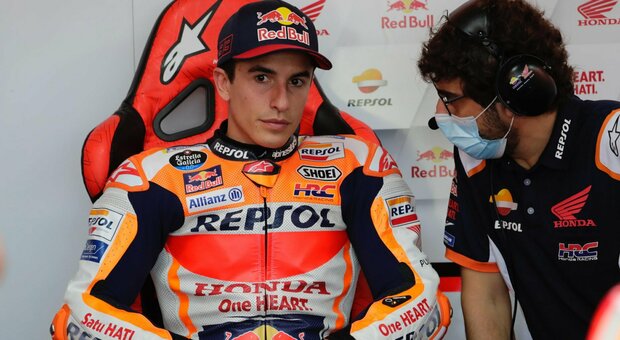 Marc Marquez it must stop again. And this time too the fault lies with diplopiathe disturbance that has accompanied him since 2011 and which had given the last signs in November 2021. The Spanish motorcyclist is forced to leave the two wheels of the MotoGp after the terrible crash in Indonesia that prevented him from competing. But the reason is not the fall itself but the diplopia, a vision disorder that forces him to practically see double, and from the first tests done as soon as he returned to Barcelona it seems that the flare-up of the disease was caused precisely by the very bad exit from the track in the warm-up on the Mandalika circuit.

It is a double perception of the image that can be transitory or permanent, horizontally or vertically or even horizontally or vertically. It can concern only one eye or both: in the first case it is an orthoptic-ophthalmological problem, in the second case a neurological problem. But where does it come from? You see two images because what is missing is that fusion mechanism that allows the brain to join the two images perceived by the two eyes. The two images, which differ from one eye to the other, can be seen both in the case of diplopia.

There are several possible causes of diplopia: in Marquez’s case the origins are traumatic but in other cases it can derive from diseases, strabisbo or disorders such as edema of the optic disc which occurs for example in the case of cerebral coma. But how is it healed? In most cases it is treatable (and can heal spontaneously) while in the case of concomitant strabismus, prismatic lenses are used or you can also proceed with surgery. As in the case of Marquez, if the paralysis is of the cranial nerves, the problem can resolve spontaneously in one to eight months. If not, however, it is necessary to intervene on the extraocular muscles.

Yet another stop that already jeopardizes his ambitions for 2022 and according to the most pessimists could now really put the continuation of his career at risk. Already during the return trip to Spain – explains his Honda team – Marquez began to experience visual discomfort and upon his arrival in Barcelona on Monday, he made an emergency visit to the Hospital Clnic de Barcelona with his trusted ophthalmologist, the Dr. Sanchez Dalmau, who after an examination confirmed a relapse of diplopia, a problem the pilot had already faced last November. And this morning, the Spaniard was examined by his medical team, led by Dr. Samuel Antu¤a, at the Ruber Internacional hospital in Madrid, where Marquez underwent a general medical check-up to assess all the bruises caused by the accident and an MRI of the brain. This reconfirmed that he suffered no other injuries.

«The neuro-ophthalmological evaluation carried out on Marc Marquez on Monday after the head injury at the Indonesian Grand Prix – explained Sanchez Dalmau – shows a new episode of diplopia caused by a recurrence of the paralysis of the fourth right nerve, with less involvement than to that which occurred in the injury of November 2021. After this examination, it was initially decided to follow a conservative treatment with periodic medical tests. Next week, Marc Marquez will undergo a new check to evaluate the evolution of the injury and foresee the estimated recovery period to return to the competition ». Marc Marquez himself confirms the new diplomacy episode through a tweet: «It seems that I’m experiencing a déjà vu. During the return trip to Spain I began to feel discomfort for my sight and we decided to meet Dr. Sánchez Dalmau – his words on Twitter – who confirmed a new episode of diplopia ». Last November Marquez was forced to miss the last race in Valencia and the subsequent tests in Jerez de la Frontera due to the consequences of a crash in training while riding motocross. The Spaniard had already suffered from the same eye problem he had in 2011. «Fortunately it is less serious than the injury I had at the end of last year – he confirms -. But now is the time to rest and wait to see how the injury will evolve. As always, thank you very much to all of you for your support! ».

Fumigation was carried out in Pocitos

“In your life you will have this truck”: the furious reaction of a woman against a doorman

Where was he? Federico Bal returned to travel after his accident