Marcel Cerdan or Jean-Claude Bouttier went there before Tony Yoka: Roland-Garros and boxing, an old story 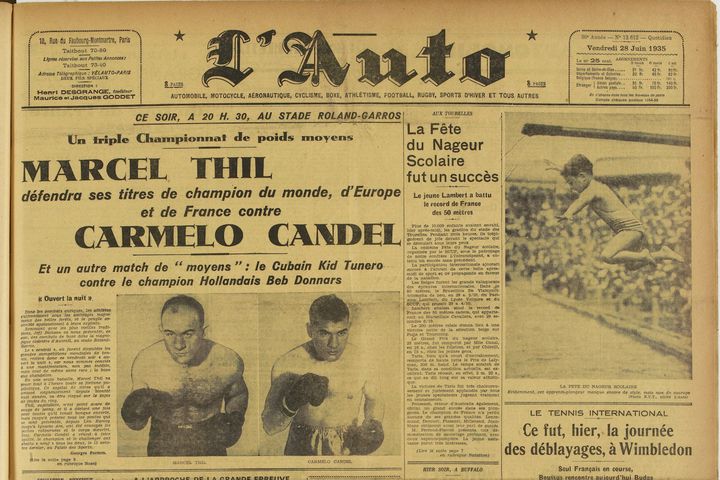 
Like Marcel Cerdan or Jean-Claude Bouttier before him, Tony Yoka will have the honors of the center court of Roland-Garros for his eleventh professional fight, Friday September 10. The enclosure, usually reserved for tennis, revives with the reception of boxing fights, three years from the Paris Olympic Games 2024, during which the boxers will compete on the Suzanne-Lenglen court.

Built in 1928, Roland-Garros has hosted boxing matches since the 1930s and world champions such as Young Perez, Marcel Thil and Émile Pladner have followed one another there. “At the time, one of the biggest promoters was called Jeff Dickson. He was an American who lived in France and organized the most prestigious fights. He negotiated with the French Stade club and the French Federation of tennis to be able to use Roland-Garros”says Sylvain Ville, boxing historian and lecturer at the University of Picardie Jules Verne.

“The organizers are looking for large arenas, with visibility, where the ring can be placed in the center of the public”, he explains. Since 1920, outdoor boxing has developed in France during the summer season. “Normally, outdoor fights attract a slightly less chic audience than indoors. But by organizing galas at Roland-Garros, the promoters maintain a worldly aspect”explains the historian.

Among the fights that took place at Roland-Garros, that between Marcel Cerdan and Holman Williams on July 7, 1946 remains legendary. “On the dark bleachers shine the fires of thousands of cigarettes and gleam curiously the binoculars of the binoculars which reflect the lights of the ring. Greeted by acclamations and cries, Cerdan and Williams make their appearance between the turnbuckles”recount the newspaper The world at the time [article payant].

Finally, the “Moroccan bomber” wins against the American in ten rounds, despite a broken hand. It is also there that Cerdan meets Edith Piaf.

Years later, the Frenchman Jean-Claude Bouttier also fought inside the Porte d’Auteuil. On June 9, 1971, he became European middleweight champion by winning on points, after 15 rounds, against the Italo-Argentinian Carlo Duran. That evening, nearly 15,000 spectators watched the fight. “in the venerable Roland-Garros stadium, which had gone from the collected silence of tennis exchanges to pugilistic vociferations”, again reports the evening paper [article payant].

In 1973, Bouttier returned to center court, this time facing Carlos Monzon. The French boxer loses on points, in a fight organized by Alain Delon: “In the 20th century, many promoters are halfway between the world of sport and the world of entertainment. The director of the Folies Bergères, for example, organized fights. There were also fights at the Olympia and the Moulin Rouge”explains Sylvain Ville.

Friday evening, boxing therefore returns to Roland-Garros, almost 50 years after the last fight. Tony Yoka will face Croatian Petar Milas in ten rounds. Two other French Olympic medalists in Rio in 2016 will also be on the program: Mathieu Bauderlique will face the Russian Igor Mikhalkin for the European light heavyweight title and Souleymane Cissokho will defend his international super-welterweight belt (WBA-Intercontinental) against the Russian Ismail Iliev.

If the weather is nice, the roof of the Philippe-Chatrier court could be open. This gala will also serve as a rehearsal when the boxing events of the Paris Olympics will be held on the Suzanne-Lenglen court, which will also have a roof by 2024.

Consumption: maintaining and renovating your sneakers, a new trend

United States: what does the “X” type available on American passports as of April 11 mean?

USA: She contracts an STD in a car and receives $5.2 million in damages

Jews celebrate Passover, the holiday of spring and salvation