“Many healthy young men have died in Qatar” 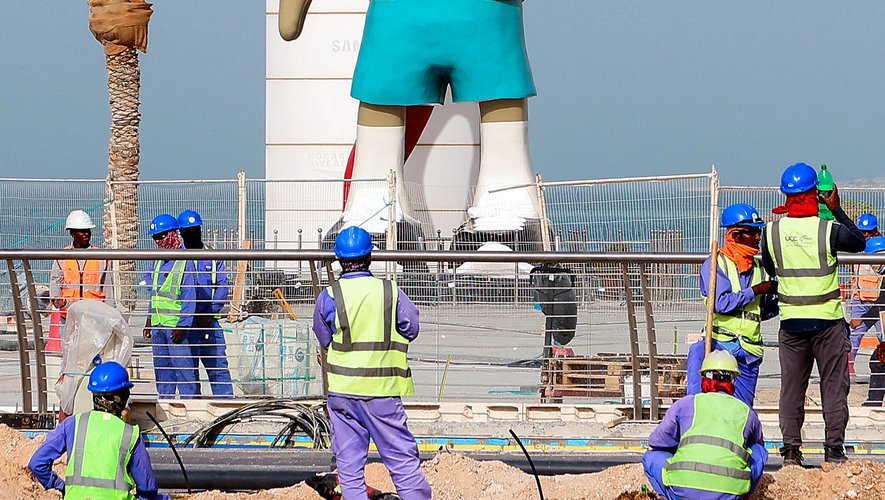 
the essential
Lawyer and researcher for the human rights NGO Amnesty International, May Romanos led the investigation with others from 2017 on the construction sites of the World Cup in Qatar, which saw a million migrant workers. from Southeast Asia or Africa. She explains why Amnesty considers it necessary for a compensation fund for these workers to be set up by Fifa.

How did Amnesty’s investigation in Qatar go?

It began in 2011. As low-skilled migrants, often from Nepal, Bangladesh, India or Africa, provided almost all of the labor on the World Cup sites, Amnesty saw the opportunity to shine the spotlight on the condition of these migrant workers from the Gulf. Our goal was to exert pressure on Qatar and Fifa, with the idea of ​​changing the system, dominated by the use of “kafala” (practice of “sponsorship” which subjects the worker to his employer, editor’s note) .

How did the beginnings of your investigation go?

I personally arrived in 2017 and worked on the subject of workers at the Mercury Mena company. It was a group of migrants assigned to the Lusail stadium site (which will host the opening match and the final of the World Cup, editor’s note). They hadn’t been paid for six or seven months, the company had stopped the site and left them there, without food, without electricity, without water. They weren’t allowed to leave the country either, because of the kafala system. We followed some of them when they finally returned to Nepal, where their situation was very difficult, especially because they were in debt.

Did you have to pay to come and work in Qatar?

You were paying recruiting fees to an agency, to sort of buy the right to work. These costs could be from 1,000 to 3,000 dollars. That’s a lot of money, since the monthly salary in Qatar is a maximum of 300 dollars. Many did not have this money and therefore had to borrow it at high rates. Moreover, at the time of the World Cup sites – this has in principle changed since – you could not come to Qatar without having a sponsor, usually the employer, who was responsible for your entry into the territory, your stay and your permit. of residence. You were totally dependent on him.

What working conditions have you discovered?

When the workers arrived in Qatar, they found that the conditions were worse than promised, with longer working hours, lower wages. But they couldn’t negotiate, couldn’t leave the country or change company without the permission of their employer… So of the person responsible for these abuses. The worst that could happen was just not getting paid. However, if you are not paid, not only can you no longer send money to feed your family, but you have problems repaying the recruitment fees, or the loan taken out to pay them, with interest. It was a very important subject, endemic to Qatar, with late payments which can also be very damaging. The government of Qatar has since taken action.

What did you observe on the financial conditions?

Today there is a minimum wage in Qatar of 275 dollars per month with theoretical supplements for food and housing. But collective accommodation was often offered for construction workers, in a sort of work camp, a building where they shared rooms, sometimes twelve, with bunk beds, and in precarious sanitary conditions.

You have seen a significant number of suspicious deaths…

Many of these employees were doing heavy work outdoors in very harsh weather conditions. In Qatar and the Gulf in general, the temperature can, for at least six months of the year, rise to 40 degrees, with very high humidity. Even walking outside in these conditions is very difficult, so you can imagine what it can be like to do some hard work. Work hours tended to get longer, which increased exhaustion. This is where the main topic we documented came up: the deaths of large numbers of young, healthy men.

The British newspaper the Guardian put the figure at 6,700 dead. Do you confirm it?

It is impossible to know how many people died suspiciously, since death certificates often only mentioned “natural causes” or “cardiac arrest”, without mentioning the underlying cause of death. Their families therefore received no compensation either from the employer or from Qatar. Young, healthy people frequently died in their sleep, although they often had no medical history. Dying under these conditions therefore suggests that it was linked to what is called in English “heat stress” (heat stroke or hyperthermia in French). We can only shed light on these thousands of deaths through an in-depth investigation, which Amnesty is calling for.

Has the situation changed today?

Reforms have been introduced but Amnesty has shown in an investigation and report that they are not always in full force. The problems persist, for example, in the hospitality sector or the security sector, where workers are sometimes subjected to the same injustices as those we have documented for workers on the World Cup sites. I have personally also been able to see that the domestic workers suffered a lot, with very difficult working and living conditions, because to all the problems already encountered by the other categories of employees, there is added that of isolation and absolute dependence on the employer.

Amnesty asks Fifa to set up a fund of at least 420 million euros to compensate workers who are victims of violations of their rights, deprived of their wages, injured, as well as the families of the deceased. The sum represents around 6% of the World Cup revenue, located between five and six billion euros. Fifa agreed to discuss with Amnesty, without committing. Some national federations, notably the British and German, have approved the principle. The French Football Federation (FFF) did not comment categorically, only mentioning the hypothesis in a press release at the end of September. On November 2, Ali Ben Samikh Al-Marri, Qatari Labor Minister, categorically refused such an idea, denouncing “a communication stunt”, an illustration according to him of latent racism against a “small country Arab and Muslim”.

Iran, footballer Ghafouri arrested: «Propaganda against the state». Stramaccioni: "Taken away in front of his 10-year-old son"

Former SBU general Naumov, who left Ukraine a few hours before the Russian attack, was detained with a large sum in Serbia – media

Can Loneliness Cause Heart Attacks?

“The servicing of the national debt has become affordable, but having accumulated so much debt, has that money been spent effectively?” Hayk Mnatsakanyan

“I want her away”: this would have happened between María Becerra and China Suárez in a recital