Male pattern baldness, a lucrative market without looking like it

What if hair implants and other treatments against baldness were reimbursed by Social Security? This is what could have happened in South Korea, if the democratic candidate Lee Jae-myung had been elected president on March 9th. In France, no candidate has yet made such a proposal. However, hair loss affects millions of people, and generates a very lucrative business.

In France, it is men who are most affected by androgenetic alopecia (commonly called “baldness”). 13% over 18, according to a survey carried out in December 2014 by the FIFG, compared to only 2% of women. This phenomenon, linked to the natural aging of our body, is a source of stress that pushes the most affected to pay astronomical sums to remedy it. From the simple food supplement sold in pharmacies, to the Social Security fraud of certain professionals, male hair loss does not only concern bald people.

The implant, the most expensive solution

“I’m 25, and baldness is my biggest complex.” Thomas does not mince his words when he talks about his problem. For several months, he has been saving money to afford his first transplant. Having hesitated for a long time before having the operation in France, he made a first estimate in a renowned Parisian clinic, which announced a price between 8,000 and 9,000 euros. He finally finds a brand new clinic, the Racine Carrée center in Levallois-Perret, which offers him an operation at the price of 2,000 euros, but carried out by a robot.

Like Thomas, more and more of them are turning to transplants. A trend confirmed by Dr. Pierre Bouhanna, a reference in hair implants who has been practicing since 1976 in Paris: “For six years, the increase in demand has been very clear.” Same observation in Nice, in the private clinic where Naïma works: “I’ve been doing hair transplants for thirty years, and right now it’s exploding.”

On the price side, it is very hard to establish a representative grid, because each operation is unique. It depends on the grafting technique used, the surface to be treated, the number of grafts or FUE (a follicular unit which may contain one to three hairs) implanted, and also of the reputation of the surgeon. Naïma explains that in France, “an FUE can cost between 2.5 euros and 6 euros. The average is 3.5 euros. So a transplant can range from 3,500 euros to more than 10,000 euros for an area.

For all these reasons, many French people are turning to Turkey and its unbeatable prices. This is the case of Pierre, 60, who offered himself two transplants in Turkey, for the total sum of 3,800 euros (including accommodation costs). “For the same operation in France, I should have paid between 12,000 euros and 15,000 euros. Between Turkey and France, I remember a price ratio of five to six.”

The pharmacy, courtyard of miracles

Before arriving at the transplant, Pierre tried everything. When he takes stock of the shampoos and other products he has tried, he estimates the money spent on these supposedly miracle products at 3,000 euros.. All this to see no results.

Men and their hair: bald who can

For the dermatologist Philippe Assouly of the French Society of Dermatology (SFD), “the only two treatments available in pharmacies, effective in preserving hair, are minoxidil 5%, and finasteride 1mg in tablet”. Finasteride is sold only on prescription because it can cause side effects (loss of libido, sterility, depression).

In the pharmacy and parapharmacy circuit, hair care represents the fourth segment of dermocosmetics in terms of sales. Florence Grasser, France marketing director of Ducray dermatological laboratories, confirms “the strong growth of the fall arrest market”. She puts this marked increase in connection with the health crisis and all the stress that accompanies it, which is one of the causes of hair loss.

Not all hair professionals are in favor of these products sold in pharmacies, the results of which vary widely from one patient to another. “As a trained hairdresser, I find all these solutions a bit marketing”says Orlane, who has worked for thirteen years at the Atelier du cheveu in Cholet (Maine-et-Loire). “Once the hair capital is consumed, there are not so many solutions.”

Rather than trying these daily treatments, some prefer to opt for a more drastic option: the hair supplement. 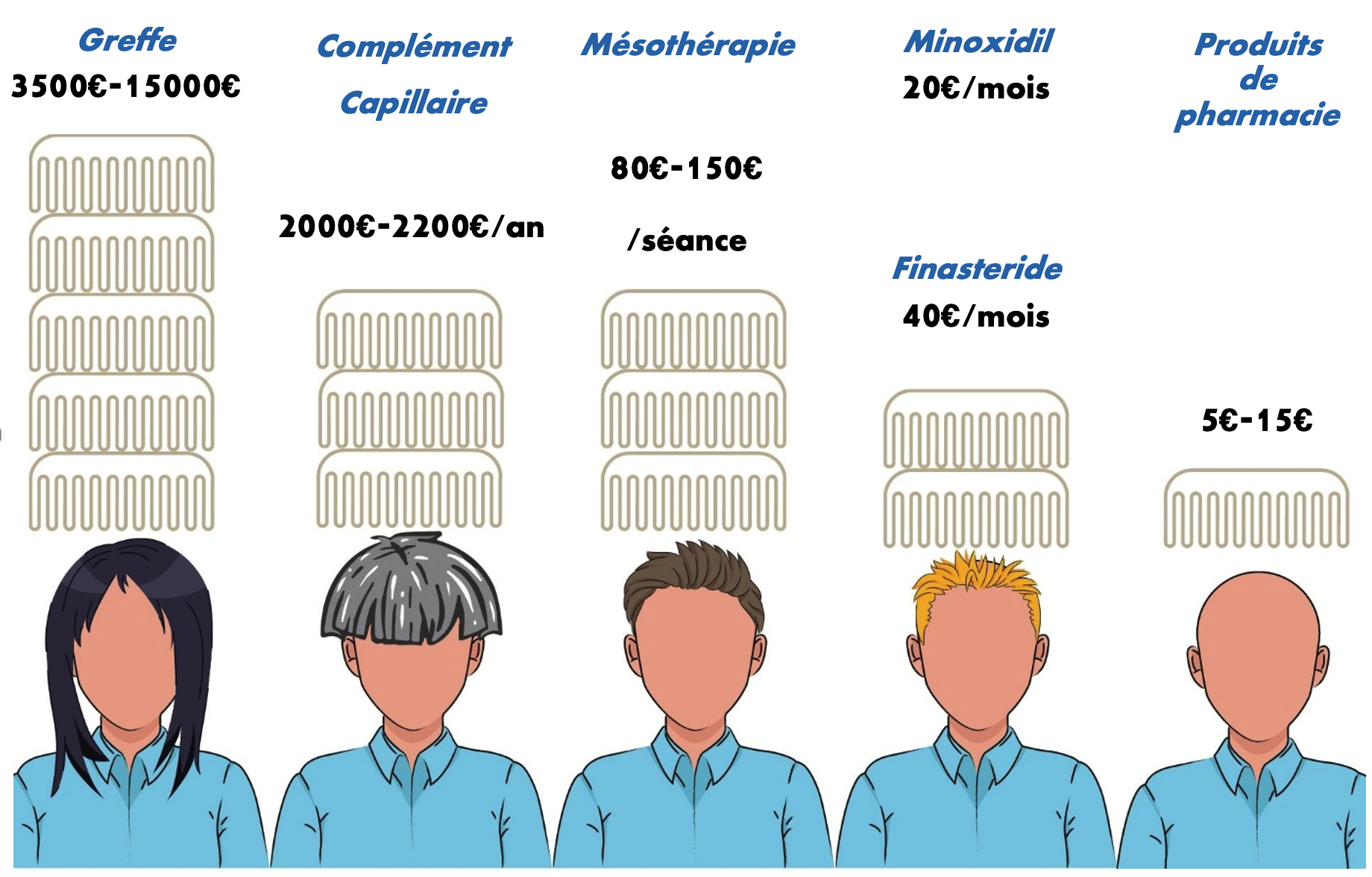 At 50, Pascal Galteau would have liked to have a transplant, but he cannot afford it. He then turns to the hair complement, a set of real hair fixed on an ultrathin layer of silicone glued to the skull. “It allows me to live again. They tell me that I gained ten years since I wear it. Less expensive than implants, the hair supplement costs between 2,000 euros and 2,200 euros per year, because it must be changed every three months. Its effectiveness is direct and without side effects, provided you keep it for life.

3D printing could help you stop losing your hair

Among all the more or less expensive solutions that exist to counter baldness, none is reimbursable. However, there is a flaw.

Mesotherapy, will reimburse… not reimburse

Mesotherapy is a treatment that consists of injecting a concentrate of vitamins under the skin of the skull, by making injections there. This aesthetic treatment, which has been in fashion for five years, aims to reactivate tired bulbs. Every six months, this care must be renewed. A mesotherapy session costs between 80 and 150 euros.

However, Théophile has been going to his Parisian dermatologist for more than a year for his mesotherapy sessions, and so far he has not paid a penny. “My dermatologist takes my vital card and I am reimbursed. He told me from our first meeting that mesotherapy was covered by Social Security.” Théophile’s doctor is not the only one to have these sessions reimbursed, and that is a problem.

Philippe Assouly of the SFD does not believe in mesotherapy at all, and even if he understands that we “may suffer from baldness, it is not considered a disease. Otherwise it is the door open to all excesses, and it is the end of the Secu. All practitioners who have mesotherapy reimbursed expose themselves to risks that can range from simple reprimand to suspension of exercise. “This is what happened to a Savoyard dermatologist a few years ago”, remembers Jean-Marc Piumi. “Social Security became aware of the fraud, and he had to reimburse all of the sums due.”

Although hair loss is not considered a disease, and the choice to treat it is purely cosmetic, it must be recognized that there is a misunderstanding. Why not reimburse existing treatments against baldness, while social security, for example, reimburses treatments against acne? Not to mention the psychological suffering and the social and professional consequences that hair loss can cause.

Théophile, a business school student, was deeply affected. “I find it normal that mesotherapy is reimbursed to me by Social Security. When I started losing my hair, it was a cataclysm. I felt old, ugly and weak. It had become a huge stressor. When I arrived in lecture hall, I never put myself in front, for fear that the top of my skull would be seen. Since I have been treated, I have come back to life.”

What have we learned from the pandemic?

Today’s meeting is a very significant event for us. Nikol Pashinyan

With Mestre and Varela from San Juan, the deaf team debuts in Brazil

A man suffered injuries when attacked by dogs in Rivadavia