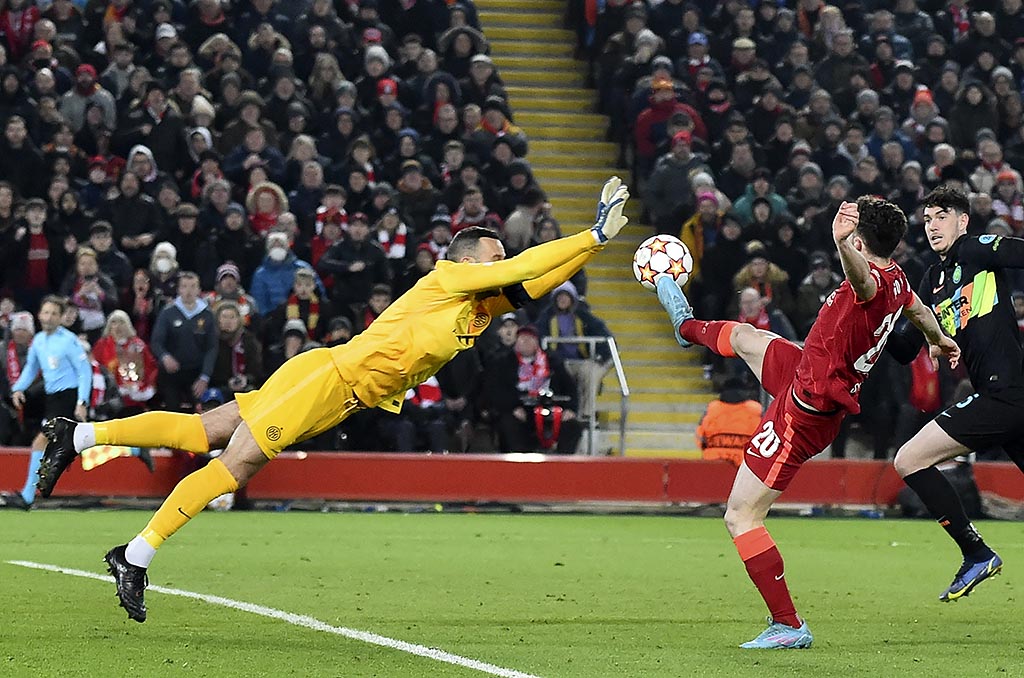 Liverpool defended two goals against Inter at the Anfield Stadium, which they gained in the first match in Milan. He was a big favorite before the game. Of course, Inter did not just come to England on a trip, they tried to surprise the team from the Beatles.

The guests started very bravely and were more dangerous at the beginning of the match. They broke through the flanks of the home defense a few times, but did not come to the right conclusion.

Liverpool gradually took the initiative on the pitch. In the 16th minute, Van Dyke was the first to block goalkeeper Inter Handanović, who was on the spot.

We saw the first real opportunity in the 31st minute when Matip hit the crossbar after a free kick from the left of Alexander-Arnold. Handanović was already defeated, Inter was lucky.

In the 41st minute, they were dangerous guests for the first time. A free kick from Calhanoglu’s right side was saved by the home goalkeeper Allison into the field.

In the last minute of the half, Alexander-Arnold missed from a free kick.

That was also all in the first half, which was very modest in terms of action and opportunities.

The second half was more varied in opportunities. We saw the first one in the 51st minute, when Handanović intercepted in front of Diogo Joto, and Salah sent the rebound into the left goal.

In the 59th minute, the first beautiful opportunity for the guests, Martinez had an open shot from twelve meters, the ball flew past the right goal.

In the 61st minute, Martinez only scored. From eighteen meters, he “took off the cobweb” from the upper left corner of the home door. The Italian team was expected to hunt for the second goal.

But Sanchez’s stupid start in the 63rd minute, for which he justifiably received a red card, prevented them from doing so. With a player less they couldn’t attack the home side.

In the 76th minute, Salah scored again after a combination with Mane. At the end of the match, Vidal prevented Diaz from scoring. The Italians won, but could not rejoice.

Despite the defeat, Liverpool reached the quarterfinals with a total score of 2: 1. The ‘Reds’ didn’t impress with the game last night, especially from the trio in the Mane-Diogo Jota-Salah attack a little more was expected. They hit the post three times, Handanović was powerless in all these shots, they had quite a bit of luck. They will have to show more in the quarterfinals.

Inter said goodbye honorably. The Nerazzurri wasted their chance to advance in the first match in Milan. They had their chances there, but gave up in the playoffs. They managed to stop Liverpool’s attacks yesterday, they did not receive a goal. When Martinez scored, it seemed they could surprise and win overtime. But Sanchez’s stupidity forced them on the defensive, with the player less they no longer had any chance.

In the second match yesterday, Bayern eliminated Red Bull Salzburg easier than expected. He beat him 7: 1 and advanced with a total score of 8: 2. The match was decided in the 23rd minute, when Lewandowski scored his third goal. He had previously scored from the penalty spot in the 12th and 21st minutes. Müller scored twice, in the 54th and 83rd minutes. Gnabry and Sane contributed one goal each in the 31st minute.

For the guests, Kjaergaard scored in the 70th minute. Benjamin Šeško entered the game in the 82nd minute. The Bavarians have proven to be the main favorites for the European title, along with Manchester City, Chelsea and Liverpool. With a game like the one they showed last night, it will be hard for anyone to stop them. They were at least a class better than Salzburg, the result of the match says it all.

Roscosmos returns the American astronaut to Earth on March 30

Kylian Mbappé’s phrase about Messi and Neymar that leaves doubts about their future: “It’s a shame”

A participant of ‘El Hotel de los Famosos’ broke into tears in the air: “I had a lot of respect for him”