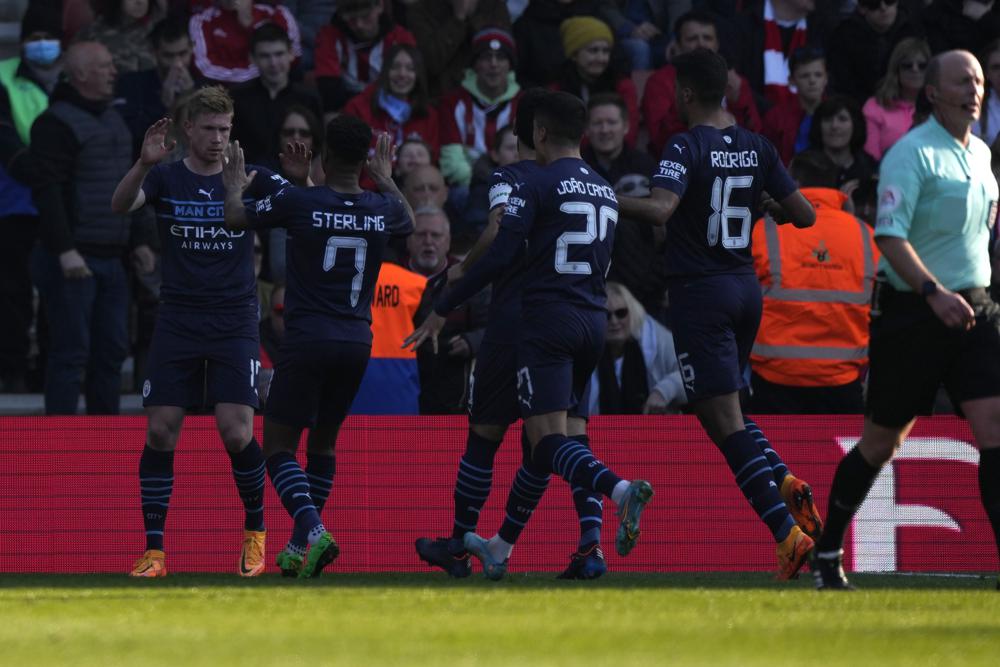 In the midst of another tight battle for the Premier League title, the two rivals from the north-west of England will have to schedule an FA Cup semi-final.

Both won away in the quarterfinals on Sunday. City beat Southampton 4-1 while Liverpool struggled to beat second-tier Nottingham Forest 1-0. The draw ended up determining a cross between the two.

The two Premier League leaders will meet first in the league at City’s Etihad Stadium on April 10. City currently leads Liverpool by just one point.

The FA Cup semi-final will be played at Wembley Stadium on the weekend of April 16-17.

In the midst of those games, both faced commitments for the quarterfinals of the Champions League. City will face Atlético de Madrid and Liverpool will clash with Benfica.

It will be a decisive moment of the season, in which the depth of the plants and the rotations will have an impact.

The other FA Cup semi-final will be a London derby between Chelsea and Crystal Palace, which crushed Everton 4-0 to gain access to the tournament for the first time since 2016.

They got loose in the second half

City moved into the cup tournament semi-finals for the fourth successive season by unleashing a second-half gale against Southampton.

The visit to Southampton began to insinuate itself as another fiasco for City, who had twice in the Premier against the southern club this season.

However, Kevin De Bruyne’s penalty on 62 minutes restored City’s lead. Goals from substitutes Phil Foden and Riyad Mahrez in a span of four minutes from the 75th rounded out the result at St. Mary’s Stadium.

City’s own goal Aymeric Laporte in first-half stoppage time leveled the score after Raheem Sterling opened the account in the 12th minute.

Those led by Pep Guardiola fell in the semifinals in the two previous editions of the cup tournament, first against Arsenal and then against Chelsea.

Liverpool is still in the race for four titles and they can thank Diego Jota, who scored the winning goal against Forest in the 78th minute.

Forest knocked out the two previous champions of the tournament — Arsenal and Leicester — in the previous rounds and gave them a tremendous scare at the City Ground.

On Saturday, Chelsea submitted Middlesbrough 2-0 to advance. Palace will also be at Wembley Stadium after checking out Everton.

Marc Guehi, Jean-Philippe Mateta, Wilfried Zaha and Will Hughes scored Palace’s goals at Selhurst Park. The London team had not qualified for the semifinals since 2016.

A 1-0 win against Newcastle on Thursday bolstered Everton’s chances of escaping relegation from the Premier League, but Frank Lampard’s side were overwhelmed after a high intensity display early in the game.

Palace manager Patrick Vieira has won the FA Cup five times as a player — four with Arsenal and one with City.

The ties for the #EmiratesFACup semi-finals are set pic.twitter.com/WUw2nwR6XP

have the informationInstantly on your cell phone. Join the Diario Primicia group on WhatsApp through the following link:https://chat.whatsapp.com/LjP1mxWVjO3FS65tpSayDj

Foods with "slight adjustment" in the Unare market

“All wounds are critical, many limb amputations.” At least 14 children seriously injured in Zaporozhye region in three days – OVA

A figure from ‘El Hotel de los Famosos’ was honest in front of Pollo Álvarez: “I don’t bank”