Lingard posted the photo of the young dogs with the missing detail: the player is accused of animal cruelty 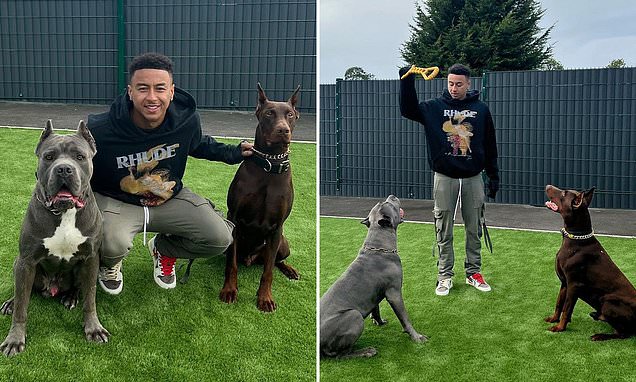 
Jesse Lingard is engulfed in controversy. Nottingham Forest star accused of animal cruelty. The player made an Instagram post featuring his two new four-legged friends. Nothing wrong with that, except that the two dogs had the tips of their ears cut off. This type of surgery is illegal in the UK unless it is done for purely medical reasons.

Jesse Lingard posted the picture of his new dogs Creed and Cash on social media, but it was met with criticism. The player’s followers actually immediately noticed that the tips of the two guard animals had their ears cut off. Surgery that involves cutting the ear is usually performed for aesthetic reasons. But this is an illegal procedure in the UK unless it is carried out for medical reasons.

Basically, the flashy part of the ear is cut off and the hard part is left to grow up to make the animal look more “attractive”. The procedure is usually done on puppies between six and 12 weeks of age. It can be extremely traumatic for dogs. Moreover, there are no health benefits to them. Many owners of Dobermans or similar breeds, the Daily Mail points out, cut off the tips of their ears simply for fashion.

Lingard was thus charged with animal cruelty. One follower wrote: “You ruined 2 amazing dogs! Idiot”. The comment received over 120,000 likes. But there are also those who defended the former striker of Manchester United: “The dogs look quite healthy. But of course, people will think, as always, that they have the authority to judge”.

The 29-year-old bought the two dogs from Chaperone K9 Ltd, which boasts on Instagram that it is “the best dog supplier in the world”. The Leicestershire-based club have also sold watchdogs to Chelsea midfielder Ruben Loftus-Cheek. In addition to him, Arsenal’s full-back, Kieran Tierney, also bought there in the past.

He kidnapped and raped his ex-wife, the Albanian is arrested in Greece

Covid 19 situation/ Ministry of Health: 1228 infected citizens and 3 deaths in the last 24 hours

Video: the goal that Cristiano Ronaldo wanted to “steal” from Bruno Fernandes against Uruguay

Sale of medicines through the internet eludes all controls