Leicester-Rome 1-1: Lookman responds to Pellegrini. Everything is decided at the Olimpico 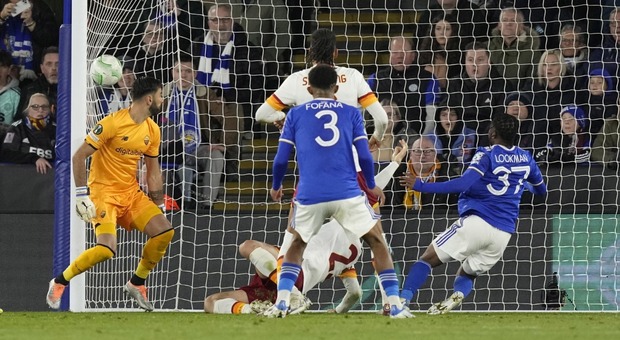 Access to the final of the Conference will be played in a week at the Olimpico: Rome And Leicester they draw 1-1 goals by Pellegrini in the 15 ‘, Lookman responds in the 67’. The Giallorossi present themselves to the appointment with the first semifinal of the Conference League with the same formation that beat Lazio and Bodo: Zaniolo owner with Pellegrini and Abraham in the offensive department and Mkhitaryan next to Cristante in midfield. José Mourinho plays it openly against a team that immediately tries to make the game: in the 2 ‘Vardy gets the ball, Smalling loses the marking after slipping, but the cross is providentially blocked by Mancini. The game seems to get on the wrong track for the Giallorossi who also suffer a dangerous header from Castagne (later replaced with Justin due to injury) from a corner kick. Around 10 ‘Roma manages to react, Abraham jumps the man on the right trocar, sees the cut of Zaniolo in the area he crosses, but the English defense intercepts.

The Giallorossi proved to be in the game and soon after came the goal of the advantage with Pellegrini who, after a cut in the area, receives a golden ball from Zalewski – back from a fabulous percussion – who baptizes on the net under the legs of Schmeichel. The Giallorossi are leading 1-0 in the 15 ‘, the game could go downhill, but the pressure (and concentration) of Roma drops. Leicester takes advantage of it, Abraham seems not to be on the day and misses a horizontal pass on the Roma trocar, the ball ends up in Lookman in the area, but a providential Smalling sends it for a corner. Rodgers’ team sinks to seek an equalizer, but the Giallorossi hold on. At the end of the first half Leicester’s shots towards the Roma goal are 8, but only one has taken the mirror. At the beginning of the second half Mourinho and Rodgers do not change anything, after six minutes Lookman has the ball of the equalizer, but misses the header. At 55 ‘Roma loses Mkhitaryan due to a problem with his left thigh flexor, Veretout enters his place. Shortly after Rodgers inserts Iheanacho and Barnes, providential changes that lead to a draw: Barnes receives the ball on the edge, percussion in the area, low and tense cross in the center that hits Mancini and ends up in the net. Mourinho responds by replacing Zaniolo with Oliveira, the intention is to manage the draw in view of the return to the Olimpico in a week. At 77 ‘Iheanacho kicks from distance, Rui Patricio gets there with his fingertips and deflects for a corner. Roma responds after two minutes with Oliveira served in the area by Abraham who lets go from close range, Schmeichel deflects for a corner. A few minutes from the end Smalling receives a slap from Iheanacho, he loses a nosebleed and the intervention of the doctors is necessary. Mourinho warms up and asks for a yellow card, then gives directions to the team to maintain the tie in the 5 minutes of injury time. The match ends 1-1, access to the final will be played in a week at the Olimpico.

Jorge Brito and the message for the former River who want to return: “They cannot pretend”

Santiago Cafiero told how the G7 summit was and crossed Macri: “I was going to show how he kicked free kicks”

“The Dagger”, the Russian hypersonic missile with a nuclear warhead, is undetectable