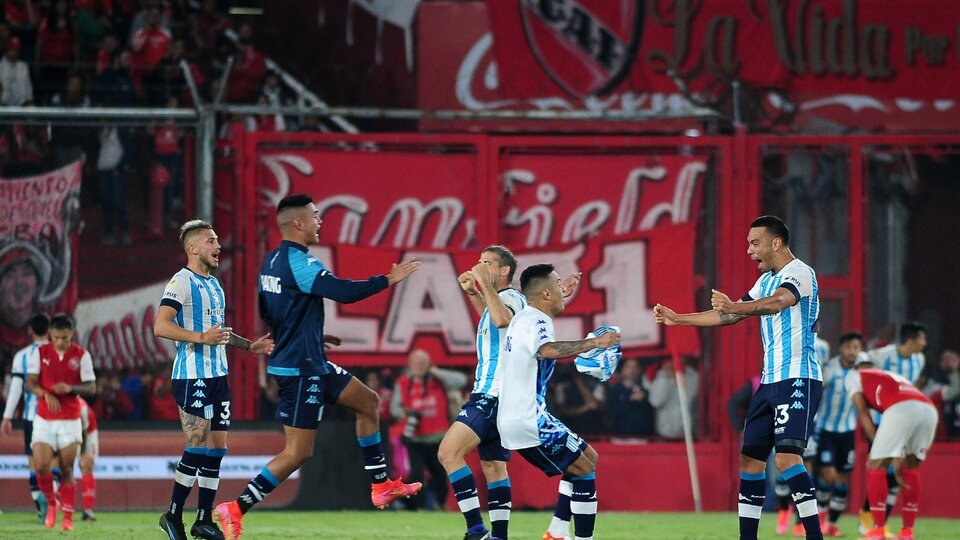 
Racing deepened its great moment with a highly celebrated victory at Independiente’s home to become a leader in its area. With a goal from Enzo Copetti five minutes from time, Fernando Gago’s team won 2-1 in a very changeable Avellaneda classic, which had many emotions and was defined in the closing. Gabriel Hauche had opened the scoring after 3 minutes and Lucas González scored the transitory tie midway through the second half.

The game started at full speed, with an arrival from Independiente and a quick response from Racing. The difference was the complicity of the red defense, which did everything possible to score a goal: from one side against the Racing de Piovi area, Chancalay and Hauche were left two against two against Insaurralde and Lucas Rodríguez. The former Colón faced the center back, who did not expect that Vigo, in his retreat, was going to score the ball to leave the rival striker face to face with Sosa. Although Chancalay finished off the post, the rebound was taken by Hauche to define with an empty goal.

Independiente, who was able to equalize on the next play through Benegas, felt the impact and lost control. His high pressure attempt was messy, which made it possible for Racing to handle the ball without major problems and always find spaces to progress in attack, especially through the Piovi-Chancalay tandem on the left. The difference in development was much greater than on the scoreboard, although Gago’s team lacked precision in the last third of the field to translate dominance into arrivals.

With more drive than ideas, Independiente always ran from behind in that first half. That is why he was dominated and could hardly put together combined maneuvers. In one of the few that did, Romero tried from outside the area and forced a great save from Gómez.

The halftime served to Independiente to rethink everything. From the changes that Domínguez proposed, with the entries of Soñora and Saltita González, to the attitude of the players, who calmed down and came out of the vertigo they were immersed in. Then another game began, with the local as the clear dominator. From the feet of those admitted, the Red found the football that he had been missing. And it was González himself who scored the tie with an excellent individual maneuver and a left-footed shot that hit the post from outside the area.

The goal invigorated Domínguez’s team even more, which deepened their dominance and pushed Racing against their area. And twice through Benegas, with a half turn that he hit the post and a left foot that Gómez took him out of the angle, he was close to taking the lead. However, when Racing was more focused on taking care of the tie than looking for the victory, an isolated play changed history: Piovi climbed up the left and sent a past cross so that Mura lowered the ball to the penalty spot to Copetti, who without rivals around, he defined without problems before the bilge of Sosa.

In the last one, Barreto badly headed a cross from Soñora, wasting a clear opportunity to equalise. There was no time for more, and all the celebration was Racing.

Ángel de Brito sent Laurita Fernández to the front: “She is going to give us surprises”

“Russian troops are landing.” Arestovich’s wife told how she and her son left Kyiv on the first day of the war

From OCD to rebirth: “The first symptoms at 10, I had to do everything 3 times”

Vaccination Scheme Certificate for all families