Kirchnerism achieved the half sanction to expand the Supreme Court 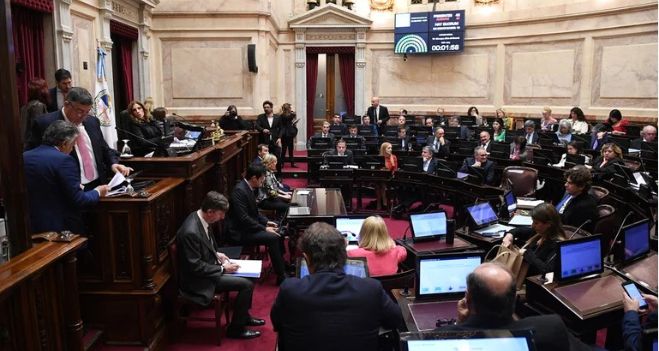 
In a session in which the absent Cristina Kirchner was very present in the speeches, the Frente de Todos achieved half sanction of the bill for the expansion of the Supreme Court of Justice.

By a total of 36 affirmative votes against 33 negative, the ruling party obtained a victory in the Senate of the Nation and passed to the Chamber of Deputies the project that establishes the formation of the highest court from 5 to 15 members.

In order to reach the quorum and the necessary votes, the ruling party had the support of Clara Vega from Rioja, Alberto Weretilneck from Rio Negro and the missionary Magdalena Solari Quintana.

After more than six hours of debate, the Frente de Todos, with the help of three senators from single-person opposition blocs, obtained the half sanction of the norm that Kirchnerism had been pushing for six months in the upper house.

The ruling party’s speeches pointed to the need to expand the number of numbers because “the definitions of the highest court cannot be left in the hands of just four people.” But then they raised the tone and pointed to the moral capacities of the current members.

“Of the four members that are on the Court today, two define absolutely everything, they vote for themselves. Is this the Court we want? We have to have another, not for us, but for democracy and for the government that will be elected in 2023″, said Senator Oscar Parrilli who, minutes later, sentenced: “We have a Court that is facing each other. Two agreed to be appointed by decree, they denounce each other. Of the four members that there are, two define everything and vote for themselves”.

Parrili targeted them and called them gangsters. “Of the members of the Court, three are gangsters and one is corporate, defends the interests of corporations,” referring to Carlos Rosenkrantz.

For her part, Senator Juliana Di Tullio said that “this Court has to be expanded because it has to be self-controlled and because it is the only way to be more democratic, seriously independent and federal.” “We believe that expanding the Court benefits the people,” she added.

From the opposition, the radical senator Luis Naidenoff asked them to review the project. “People do not believe in dialogue because of these things, can they talk about dialogue with this type of treatment? If they want to be serious, this bill must go back to committee, because they know that this project does not pass in the Deputies, ”he warned.

Along similar lines, at the end of the debate by Together for Change, the president of the interbloc, Alfredo Cornejo, said that “manipulating the debate, that due to the discrediting of Justice we need to expand the Supreme Court, I do not think it is a weighty argument or that it is an argument that is worth bringing to the venue if we want depth in the debate”.

The Formosan said that the opposition plays “the game of caprice” and stated: “If they like it, they ask for a quorum, they ask to go to the Commissions and then they don’t go.”

Faced with the possibility that an abstention could cause the session to fall, the ruling party did not authorize abstentions and could only vote yes or no.

Lower taxes and reduce the fiscal deficit, the keys to Melconian to get out of the crisis

Wong calls for prevention and awareness of malaria cases

“It was night, I saw Emilia, Evan, hugged them for the last time.” Ostapchuk said that the ex-wife does not get in touch after going abroad

Birth of the 7th child in two different families