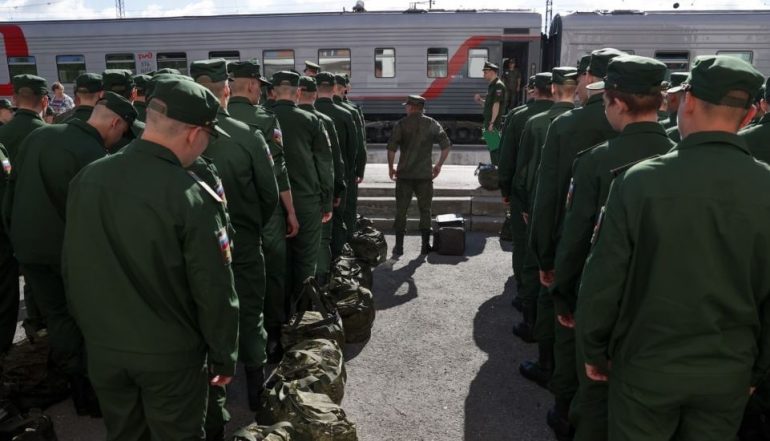 
The Russian military said on September 22 that at least 10,000 people have volunteered to fight in Ukraine, about 24 hours after Russian President Vladimir Putin ordered the mobilization of reservists.

“During the first day of the partial mobilization, close to 10,000 citizens have reached the recruitment centers, of their own free will, without waiting to be called up,” Russian army spokesman Vladimir Tsimlyansky told Interfax.

He added that the army has created call centers to answer questions from citizens and organizations related to mobilization.

On September 21, he announced the announcement of the “partial mobilization” of reservists. Afterwards, Russia’s Defense Minister, Sergei Shoigu, said that 300,000 reservists would be called up for the war in Ukraine.
After Putin’s announcement, more than 1,300 people were arrested across Russia on Wednesday during anti-mobilization protests.

Russia launched its unprovoked invasion of Ukraine on February 24. Putin, who calls the invasion a “special military operation,” reiterated on September 21 that his goal is to “liberate” the eastern Ukrainian region of Donbass.

The announcement of the mobilization came a day after separatists in four regions controlled by Russian forces in Ukraine – Donetsk, Luhansk, Kherson and Zaporizhia – announced plans to hold so-called referendums on reunification with Russia.

Voting in the so-called referendums will start on September 23 and will last until September 27. Kiev and the West condemned the plans for these votes, while the announcement of the mobilization has been described as an escalation of the war in Ukraine, which has almost entered its eighth month./REL/mj

A day after Putin's decision to mobilize, Russians of war age travel to Serbia

It is better for the Armenian-Turkish border to be open than closed. Chairman of the State Revenue Committee

They renew the mental health unit of the San Carlos hospital

The smiling baby found in Debed spreads heat like his name. My wish is for all the “men” of the world to live in peaceful and warm families. Arusyak Manavazyan