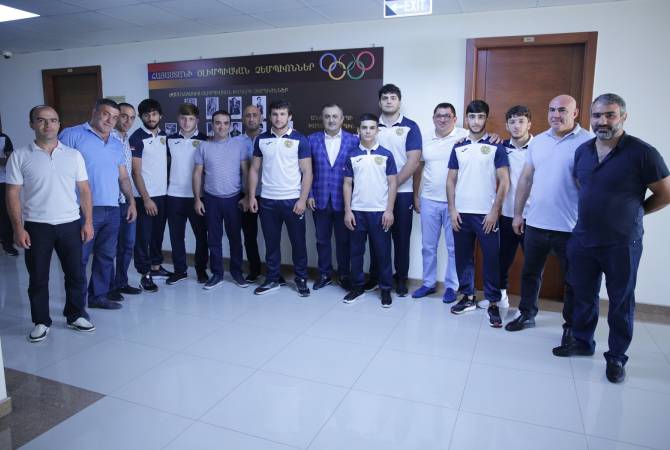 This was reported to “Armenpress” by the Ministry of Sports, Youth and Sports, noting that young and young wrestlers recently participated in European youth, European under-15 and world under-17 championships and won a number of medals.

The meeting was attended by the President of the Wrestling Federation of Armenia Robert Khachatryan, General Secretary Arayik Baghdadyan, coaches and athletes of youth and youth teams.

Karen Giloyan, the deputy minister of KGSMS, congratulated the medal-winning athletes and thanked them for their work.

“I am also grateful to your coaches and the federation management. There are really a respectable number of medals, and I am very happy that the state is already able to give an assessment corresponding to these results to some extent.”

Karen Giloyan also informed that young wrestlers are also included in the Paris-2024 program, within the framework of which the winners and prize-winners of the world and European championships, as well as the athletes who took the 4th-8th place in the Olympic Games and the world championships, will receive state benefits.

“You are probably already aware of medical assistance. From expensive, urgent medical care to the most basic intervention will be free for you from now on. Two highly qualified traumatologists invited from Moscow work in the sports medicine department of “St. Grigor Lusavorich” medical center. The center is also equipped with the most modern medical equipment. We do our best to make sure you don’t have any more problems. All you have to do is train as best as you can, fight and win titles and medals first for yourself and then for the country. I wish you all success in the upcoming competitions. Everything is in your hands.”

The President of the Wrestling Federation of Armenia, Robert Khachatryan, also thanked the Ministry of Sports and Recreation for responding to their problems and providing a solution as quickly as possible. “I know that you are doing everything that depends on you. We also understand that there are many complications in these difficult times, and not all issues can be resolved immediately.”

Robert Khachatryan also thanked the young wrestlers for winning medals in difficult times and bringing joy to our nation.

Only 41 kg Yuri Mkhitaryan won a medal in the U15 Armenian Greco-Roman style wrestling team, becoming a silver medalist.

The freestyle wrestling team of Armenia under 17 years old won two bronze medals at the world championship held in Rome. Arman Harutyunyan (45 kg) and Razmik Epremyan (71 kg) stood on the third step of the podium. As part of the Greco-Roman team, Gaspar Terteryan (60 kg) became the gold medalist, and Ararat Varderesyan (71 kg) became the bronze medalist.

Rosario Central and Newell’s meet in the most passionate classic

A volunteer who saved hundreds of families: The Vorzelyans stood in front of the Pskov paratroopers and said: “If you want to take the volunteers away, you will have to kill us.” Orcs got scared

Biden’s test for coronavirus is again positive. His recovery from COVID-19 was reported three days ago