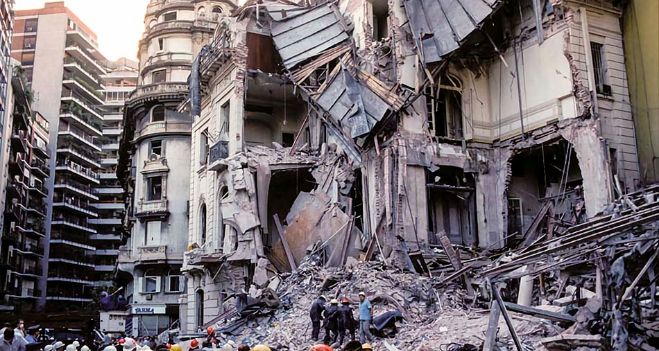 
An investigation carried out by the Israeli secret service (Mossad) asserted that the attacks against Israeli and Jewish targets in Buenos Aires in the 1990s were not knowingly instigated by Argentine citizens or assisted by Iran in the territory.

The New York Times published details of the study last Friday, providing a detailed description of how the attacks were planned, including how the material for the explosives was smuggled into Argentina in shampoo bottles and boxes of chocolate.

Mossad’s conclusions were based on information from the agents, from the interrogation of suspects, and from surveillance and wiretapping.

He also affirmed that the report does not mitigate the responsibility of the former officials of the Iranian embassy in Buenos Aires and of the leaders of the Persian nation on whom Interpol red notices weigh to be detained for those terrorist attacks of 1992 and 1994.

Haiat told Télam that the report, whose details were published last Friday by The New York Times, “is based on a summary of the State of Israel’s investigation into the two attacks and reaches a very clear conclusion: behind the attacks is Iran, which initiated, organized, financed and authorized the targets, which were the embassy and the AMIA headquarters.

ATTACK ON THE EMBASSY OF ISRAEL: WHAT THE REPORT SAYS

Now, Infobae reported that he had access to the 43-page report and carried out an analysis of it. In turn, they published the image and file of the suicide driver who blew up the Israeli Embassy on the orders of Iran and Hezbollah.

The attack, which occurred on March 17, 1992, caused 22 deaths and more than 200 injuries. The official report ratified the political and criminal responsibility of Iran and Hezbollah in the blowing up of the Israeli diplomatic headquarters.

According to what Infobae pointed out, the Mossad confirms that Iran “uses Hezbollah as its armed wing and its proxy to cover up its political and criminal responsibility in the attacks that take place around the world.”

Likewise, from the media they specified that it would not be a peer relationship, but that Hezbollah operates under the command of Tehran, through high-ranking officials.

“From all the information that has been accumulated during the years dedicated to investigating the two attacks perpetrated in Buenos Aires -Embassy of Israel and the AMIA-, it appears that these were committed through the cooperation of Iran and Hezbollah. These two parties came together and took advantage of the relative advantages of each (one) of them to achieve their goal, causing multiple fatalities and hundreds of injuries,” reports the Mossad dossier published by the media.

THE SUICIDAL DRIVER WHO BLOWN UP THE ISRAEL EMBASSY

On the other hand, Infobae published the image and the file of the suicide driver who blew up the Israeli Embassy.

This is Muhammad Nur Al-Din Nuer Al-Din, a Lebanese born on January 3, 1966. At that time, in 1992, he was just 24 years old. “The average age of a low-ranking member of Islamic Jihad, the armed wing of Hezbollah,” the outlet explained.

In turn, he reports the possible identities of his mother (Fatma/Fatima Yunes) and his three brothers: Ali Noureddine, Nimer Nur Al-Din Nur Al-Din and Hadi Nur Al-Din Nur Al-Din. That same document provided the image of the suicide, published in November 1992 in the Lebanese newspaper AI-AHD.

For the Mossad, there is no doubt about the involvement of a suicide driver. “It should be noted that Hezbollah used to make frequent use of terrorists and/or suicide drivers in the 1980s and 1990s. For example, Hezbollah used suicide drivers to blow up the headquarters of the US military and French peacekeepers in Beirut in 1983. Another prominent example is of course the AMIA bombing by Hezbollah and the Iranians in Buenos Aires in 1994, and the failed Hezbollah (Islamic Jihad) bombing of the Israeli embassy in Bankok, Thailand, in March 1994″, the report asserted.

A mayor of Corrientes died after starring in a rollover

No loss of life from COVID in Albania, 42 citizens are infected in the last 24 hours

Elections in Marcos Juárez: the city of Córdoba that keeps national politics on edge

REALITY GUYS DO NOT HAVE THE STATUS OF MY REAL EX-BOYS Stanija Dobrojević is honest about everything, so she admitted this

Nevzlin: Oligarchs have no influence on Putin, they could not come and say: “End this war”