How much longer can Venezuela live its orphan of solutions? 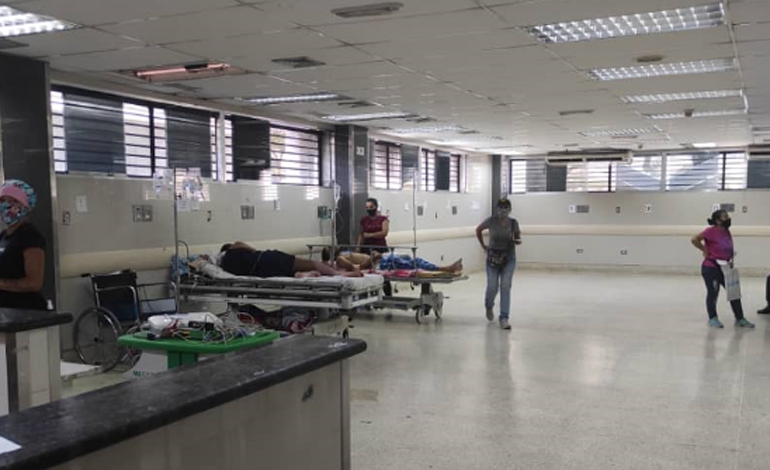 
No one is in a position to quantify or describe what the responses to the facts might be. But the truth is that Venezuela is a country without solutions, tired of accusations and fed up with the noise produced by a government caricature for which it is enough to enjoy what it describes as the exercise of power, without feeling mortified by the suffering of its citizens.

Even when any family is overwhelmed by the medical announcement that one of its members is suffering from a certain disease, such a breakdown becomes a tragedy. In the first place, because of the inconvenience, then because of the expenses, the danger to which the patient is exposed depending on the type of disease. And then because of the fact that, for the patient and his family, his next problem will be, unfortunately, that he got sick as a Venezuelan, living in Venezuela and depending on the protective assistance of those who claim to be the rulers of “this happy country.”

And the slogan of being happy, of course, is not just any phrase written on the dunes of Coro. It is that cry that cannot hide who is responsible for responding to the family that they do not have economic resources, or that, even having them, they do not get essential supplies or appropriate medications to avoid the risks of collapse. Or that, as a cry, the complaint is appeased, when, at home, many supportive relatives discover that the medicines, the treatments and even the guarapos of the grandparents. And that, in many cases, because they are cheap, they are loaded with affection and good wishes and become relief for discomfort, or an option turned into a solution.

Fortunately, not everything in convalescence is bad. In one way or another, it offers time to meditate on the present, the future family, as well as on the environment or the eventual situation in which what one lives can become. In the same way, about the possibilities and the struggle that is surrendered, about the resources, as well as about the possible options. And, of course, before the hard and silent question that is heard without being repeated: «And now what do we do»?

Of course, at the beginning there is a tendency to review the current deplorable, sad and undeserved situation that is being experienced. Then comes the hard part of the most complicated when the family analyzes what they are experiencing: “What do we have, what do we lack and what do we have?” Precisely, the most serious thing for the vast majority when they get there, is the moment in which the lacerating question is present and demands an answer for today. Above all because their single date becomes an action of indecipherable dimensions, since it is the panorama that is present, to assert their way of roaring.

Perhaps that roar was what each of the 7 million Venezuelans who decided to migrate could not understand or respond to, with the expectation and hope that, outside their homeland, one day they would be able to respond to that demand.

As for the mandatory rest imposed by the breakdown, of course, it is a companion that offers the advantage of being close to overcoming what brought the patient to the place. But, in addition, it makes possible the alternative of having more time to meditate, read, write, to become a grateful companion of social networks, as well as of the media, and to whom attention is given and they are appreciated for spending to be close to the outside world. Although without being able to stop entering the field of doubt about the truth that they deliver with their work, and the submission to what is plagued by what in Anglican idiom they call “Fake News” (false information).

How to avoid it when there are always many accusations and doubtful accusations of presumed guilty or responsible, while they stop proposing solutions, solutions, answers or hopeful news?

Of course, it takes your breath away when what abounds and repeatedly are the surveys that show that, according to their studies, more than 85% of Venezuelans already know who is responsible for the errors, thefts and destruction. from the country. Of course, as a consolation for what is known and pointed out, is that such supposedly responsible parties, clearly indicated with names and surnames and accompanied by their respective percentage rejections, should reconsider and think about the country and its people.

TO DO?. What the silence, the readings and the concern generated by any discomfort say is that we must bear in mind that Venezuelans are sitting on one of the largest oil and gas reserves in the world. Rather, about indispensable resources such as energy solutions for Western democratic nations. And that if Venezuela does not resolve the possibility of accessibility, extraction and marketing for these reservoirs, it will be other countries that will probably resolve the demands of those who need them. And it would happen due to the absence of the national supply, and causing a risk that should not be taken.

In fact, and without any explanation, certain concessions have already been made to three international companies, such as: Chevron, Repsol and Eni. Is it perhaps because of that LOVE AND INTEREST WENT TO THE COUNTRYSIDE ONE DAY, AND THE INTEREST COULD BE MORE THAN THE LOVE I HAD FOR YOU?

Everyone can build the best response to such concern or possibility. And that is why, as alternative resources, the proposal arises to promote forms of unity among Venezuelans or, at least, that 85% that, according to what is understood, can coincide around a proposal for Peace, Democracy, Legal Security and Progress.

Is it perhaps a way of dreaming in a desperate situation due to the lack of leadership that the country exhibits? The need exists and the opportunities do not always multiply. And it is urgent to present an economic recovery and REFUNDATION project as proposed by the Venezuelan Episcopal Conference. It was made based on feasible solutions for the country and its citizens, and that enables, in addition to stimulating international aid and collaboration that is willing to offer exploitation benefits to all parties.

It becomes timely to quote the famous phrase that resounds today in Venezuela, and related to “IT IS THE ECONOMY, STUPID.” The same one that was put into vogue by Bill Clinton’s adviser, James Carville, during his electoral campaign in 1992 against George Bush, Sr., and that led him to become President of the United States.

Without intending to turn reflections into excuses for judges to administer guilt or innocence, since that is what national and international courts are for, it can only be pointed out that, in Venezuela, 23 years of failures and continuous destruction have already passed. And that today’s purpose cannot continue to be a malformed system to continue fueling hatred and destruction. 85% of the population is, more than clear, that those responsible are in that minority remaining 15%, as a result of the multiple errors committed by those of the regime, as well as by those of the opposition parties. And that the only pagans have been the rest of the Venezuelans, that is, 85% of all time. Rather, of civilians, military and police forces, in marches and protests on both sides. They faithfully responded to the call, and, with so many mistakes, they even paid with their lives and institutional misfortunes.

Today it is up to that 15% to take a step with conscience and gallantry. Give yourself time to reorganize and reconstitute yourself democratically. And let it be, in this terrible historical situation, the Civil Society that manifests itself. Also, let everyone do it, supported by the International Organizations UN, OEA and EC, full of prepared people, with extensive experience and irreproachable honor. Today only they could be the ones to organize free and general elections with a totally independent and impartial National Electoral Council and a Supreme Court of Justice.

In the same way, that both the regime and the opposition nominate their respective candidates for the Presidency. And that each one, and not a swarm of candidates, with new faces, professional training and extensive experience and impeccable honor, make possible what the country needs: to build serious responses.

Of course, such candidates should be bearers of a response to the needs, responding to the fact with the presentation of government programs and proposals, with an oath and a public commitment to comply. They would have to be aimed at directing and refounding the country, in addition to inserting it into the economic world of development, progress, legal security and pacification of the country.

The price of a barrel of oil is today at $140 and will increase much more above such amounts. It will become the golden opportunity for Venezuela to achieve its recovery, and for Venezuelans to be able to rebuild the country and join the great international concert of developed countries and progress. In addition to ending poverty, prioritize education, security and health. And hoping that, in a short time, it can be achieved, at least, the recovery of what the country produced 23 years ago, that is, 3 MILLION TWO HUNDRED THOUSAND BARRELS PER DAY.

Could that level of production be achieved? What, theoretically, could be the income level? Venezuela cannot lose this unique and brilliant opportunity, much less by resorting to accusations against each other. It is not the rain of accusations that will make the changes. Nor the self-interested promotion, between supposedly good and supposedly bad, in order to prevent rapprochement, and at times when what is required is not distancing.

Definitely, the moment is not one of more destruction, of more ruin and hatred. The beauty of Venezuela is not a lie; it is a reality that demands vocation and willingness to make efforts.

“Grab the shovel, it doesn’t bite”: Jonatan Viale attacked the picketers and the Government

#InfographicIMP Formula 1 returns to Australia in a remodeled circuit #8Apr