How close is World War III? 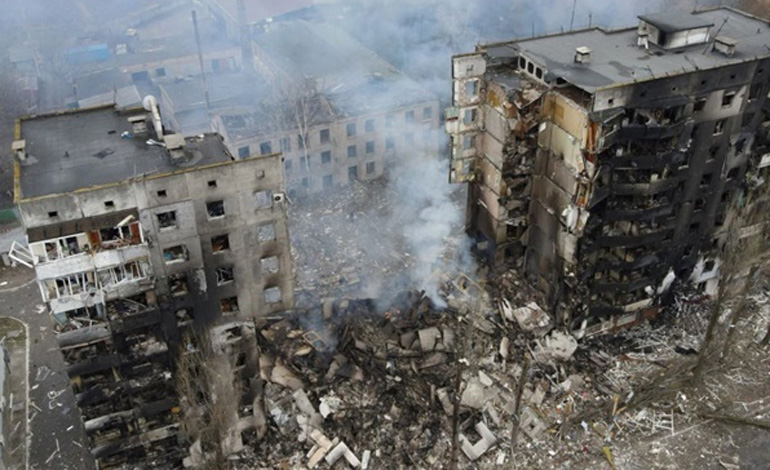 
The US will take advantage of the Ukrainian crisis to try to replace Russia’s European energy dependence (40% of the gas imported by the EU comes from Russia) with fracking dependence, flooding the European market with LNG but will not be able to avoid the twinning of Russian-Chinese interests which will be the containment dam for the imperialist dreams of the United States and which could lead in the near future to a war conflict worldwide (World War III).

US Kenyan strategy against Putin

Joe Biden’s harsh statements about Russia (“Putin is a war criminal”) and the implementation of sanctions to achieve economic suffocation and financial starvation of Russia as a result of the Ukrainian crisis have staged the arrival of Cold War 2.0 and the return of the geopolitical theses of George Kennan who stated that “saying that the overthrow of regimes hostile to the US is the main objective of US intelligence services is an open secret”. Putin is aware of the new action-reaction dynamic in which Russian-American relations will be involved from now on (Cold War 2.0) and that will result in the intensification of the US-Kentian strategy to suffocate the Russian economy.

This strategy would drink from the sources of the theory exposed by Sherman Kent in his book “Strategic Intelligence for North American World Politics” and published in 1949 where he anticipated that «War is not always conventional: in fact, a large part of warfare, both remote and close, has always been carried out with non-conventional weapons: […] weapons […] political and economic«. Later he adds that the instruments of economic warfare “consist of the carrot and the stick”: “the blockade, the freezing of funds, the ‘boycott’, the embargo and the blacklist on the one hand; subsidies, loans, bilateral treaties, barter and trade agreements on the other». This doctrine would be reflected in the recent implementation of sanctions against Russia that seek to achieve its financial starvation and economic suffocation that leads to a default or suspension of payments coupled with stratospheric inflation that causes an unaffordable cost of living for Russian society and that later lead to a Color Revolution against Putin.

Doctrine of Containment against China

The strategic agreement between Australia, the United Kingdom and the United States known as AUKUS would symbolize a change in the world geopolitical cartography by displacing the Atlantic scenario for the Indo-Pacific as the epicenter of the geopolitical pulse between the US and China with the aim of establishing a nuclear crisis arc around China that would range from Indian Kashmir to Japan, passing through South Korea, Singapore, Vietnam, Thailand and the Philippines and closing the arc with New Zealand and Australia to dissuade China from its quest to dominate the China Sea. This would symbolize the creation of the new economic and military alternative to Obama’s failed project to create a Trans-Pacific Partnership (TPP) andThe leitmotiv of such an encircling maneuver by the US would be to apply the Doctrine of Containment against China.

The bases of this doctrine wereare exposed by George F Kennan in his essay “The Sources of Soviet Behavior” published in the journal Foreign Affairs in 1947 and whose main ideas are summarized in the quote ” Soviet power is impervious to the logic of reason but very sensitive to the logic of force”, whichIt will have as a collateral effect the increase in the nuclear race in China, which by mimicry will extend to the geographical space that extends from Israel to North Korea (including countries such as Iran, Pakistan, India and China).

Said encircling maneuver would be complemented by the US attempt to drying up China’s energy sources for which Putin’s collaboration seems fundamental, since China suffers from a severe Russian energy dependency that makes it highly vulnerable. A) Yes, Russia and China sealed a stratospheric oil contract that becomes one of the largest in the history of the energy industry by which the Russian company Rosneft, (the country’s largest oil company), will supply oil to the Asian giant for 25 years worth 270,000 million dollars (about 205,000 million euros).

This, together with the gas mega-contract signed by the Russian Gazprom and the Chinese CNPC by which Russia will supply the Asian country with 38,000 million cubic meters of natural gas for an approximate amount of $400,000 million and with a term of 30 years through the Sila Sibiri gas pipeline (The Force of Siberia)which laid the economic foundations of the Eurasian Union that began its journey on January 1, 2015 as an economic and military alternative to the US, but the Ukrainian crisis will mean the twinning of Russian-Chinese interests which will be the containment dam for the imperialist dreams of the United States and which could lead in the near future to awar conflict worldwide (World War III).

The number of covid-19 patients dropped to 90, there were two new cases