Hazard pointed against Germany for going against FIFA: “It would have been better if they won the game” 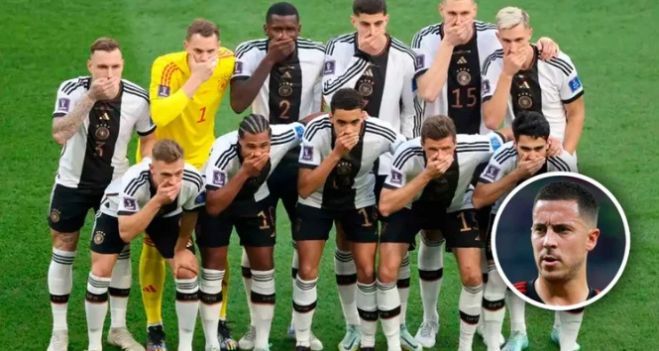 
The German team was one of the main protagonists of the first date of the World Cup in Qatar, not only because of its unexpected 2-1 defeat against Japan, but also because of its position against FIFA and the organization by not being able to wear a bracelet in support of the LGTB+ community, a repressed community in the Arab nation. Given this, who gave his opinion was Eden Hazard, one of the great figures of Belgium, who shot hard against the German players.

It is that 11 Hans Flick holders covered their mouths in the initial photo before the duel in protest and the image went around the world. When asked about the issue by the French outlet RMCSports, the former Chelsea attacker first avoided conflict: “I don’t feel comfortable talking about it because I’m here to play football”, but then shot: “Then they lost the game. They would have done better not to do it (the gesture) and win. We are here to play football, I am not here to send a political message. People are better for it. We want to be focused on football”.

His phrases generated an outburst in the main European portals since Germany’s position was supported by other federations, such as the Danish one that has already spoken out against the organization of the World Cup in Qatar for a long time. In turn, many users criticized Hazard for not being “solidarity” with his colleagues.

On the social networks of the German Federation, they published a message that accompanied the photograph of the footballers covering their mouths: “With our captain’s armband we wanted to set an example of the values ​​that we live in the selection: diversity and mutual respect. Be loud along with other nations. This is not a political message: human rights are not negotiable. That should go without saying. Unfortunately it still isn’t. That is why this message is so important to us. Forbidding us the blindfold is like forbidding our mouths. Our position stands.”

Manuel Neuer, the experienced goalkeeper and captain of Germany, could not go out onto the pitch with the multicolored bracelet in support of the LGTB+ community and put on one that said “No to discrimination”, as Harry Kane, emblem of England. In the run-up to the start of the match, one of the assistants reviewed the tape for the goalkeeper. Last Monday, the federations of the Netherlands, England, Belgium, Switzerland, Denmark, Wales and Die Mannschaft, published a joint statement after the entity that governs soccer destinations in the world warned about possible sanctions against the captains of the teams that are protagonists of the Qatar 2022 World Cup.

With regard to sports, those led by Hans Flick lost to Japan 2-1 and now they will have to face Spain, which has just beaten Costa Rica 7-0. In case of losing, the Germans will be eliminated in the first round just like in Russia 2018, and if they draw they will stop depending on themselves. For its part, Belgium was able to celebrate Canada 1-0 and was the leader of Group F because Croatia and Morocco drew 0-0.

World Cup Qatar 2022 and economy: how the results of the National Team influence consumption

Peronist trade unionists concerned about the minimum wage: “The best thing would have been to raise a little more”

The Russian invaders destroyed the Palace of Culture in Lozova. Photo report