Happy birthday Perseverance: a year on Mars, here’s what he discovered 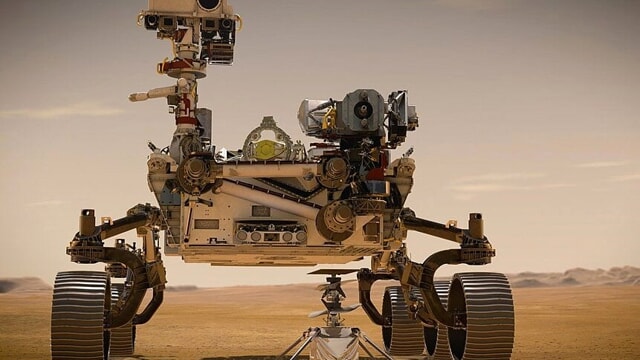 Happy birthday Perseverance. Exactly one year ago, NASA’s new rover landed on Martian soil, picking up the baton of Curiosity, looking for clues to the presence of vine forms in the distant past of the red planet. After a year on Mars, the little rover has already achieved several important goals, collecting and studying soil samples, and experimenting with the first drone ever to fly in the Martian skies. But much remains to be done, and 2022 – assure NASA – will be a year to remember for Perseverance: the exploration of the ancient delta of a river will begin, one of the most promising sites to find traces of organic life. Waiting, of course, for the next developments: the Rosalind Franklin rover, which should arrive this year, and therefore – in the next decades – the human exploration of Mars.

One year on Mars

The first challenge faced by Perseverance was to test its travel companion, Ingenuity, a small helicopter designed to demonstrate that flying to Mars is possible, despite the very low density of its atmosphere (equal to one percent of Earth’s), and gravity three times less than that of the Earth. The small drone took off for the first time on April 3 last year, and for five weeks it made as many test flights, all of which were successful.

After completing the Ingenuity test, Perseverance was then able to focus on its main task: extracting samples of Martian rocks, analyzing them, and packing them in titanium containers that will keep them for a future mission, which plans to collect them and send them to Earth for analysis. even more accurate. After some initial hesitation, since last September Perseverance has already collected 6 samples, coming from igneous rocks that have allowed NASA scientists to date the formation of the Jezero crater (the area where the rover landed) with greater precision. The mineral composition of the samples also revealed that rocks in the past were likely to have come into contact with liquid water, making them the ideal place to look for traces of ancient Martian life forms.

With the initial phase of the mission filed, since December Perseverance is on the way to reach the most exciting destination of its journey: the delta of the Jezero crater. Such sites on our planet are perfect for looking for traces of organic compounds that can betray the presence of ancient life forms, and NASA scientists hope the same is true on Mars. Currently, Perseverance is on its way back to the landing site, after a detour that led him to explore an area of ​​the crater known as South Séítah. In two weeks, the return journey is expected to be complete, and Perseverance will finally begin to make its way to the delta, where it will stay for the whole of next year, exploring the remains of an ancient lake and an ancient river that have disappeared for billions of years.

The future of Martian exploration

If in the coming months all attention remains focused on Perseverance, in September it will be time for Rosalind Franklin, the next rover to leave for Mars. The mission is a collaboration between ESA and Roscosmos, the Russian space agency. If all goes as hoped, the rover should leave around September 20, 2022, and then land on Mars the following year, in June 2023, to begin a seven-month mission, dedicated entirely to the search for traces of ancient forms of life on the planet.

The biggest expectation, however, is that for the first human mission to the red planet. There was no shortage of announcements, and currently both NASA and the Chinese space agency are actively working to orchestrate the first, pioneering journey of humans to another planet. One of the greatest difficulties to overcome is undoubtedly the duration of the flight, which currently requires between 150 and 300 days to complete, and would put a strain on the endurance of any astronaut. For this reason, several alternative propulsion systems are being developed, which could greatly reduce the duration of the voyage, such as nuclear thermal rockets, which exploit a nuclear reactor and would take around 100 days to complete the crossing.

However, researchers at McGill University have just announced a discovery that could change the cards. A new spaceship concept, which could reach Mars in just over a month: a laser thermally propelled rocket. The idea is quite extreme, because it involves using a laser of unprecedented power (10 meters in diameter and 100 megawatts of power) placed on Earth to heat the hydrogen tank of an orbiting spaceship, providing the energy necessary to reach speeds currently impossible. “The spaceship we have in mind is a kind of dragster – explained on Universe Today Emmanuel Duplay, first author of the study in which the new technology is proposed – it would accelerate very quickly while it is still near the Earth. We think it would even be possible to use the same laser-powered engine to bring the rocket booster back to Earth, after pushing the main vehicle to Mars, so that it can be recycled for the next trip. ” Unfortunately, currently, a laser like the one imagined by the Mc Gill researchers does not exist. But to halve the travel time to Mars, it is not certain that someone at NASA will not soon decide to fix it.

Dear-life, here are the apps to save on spending (and defend against price increases)

Tkachenko: Vyshyvanka is our cultural weapon

Gerardo Morales took the slogan from the Government: “We are going to put the Argentine Republic on its feet”

Drinking coffee may reduce the risk of endometrial cancer