“H … d to you, not Mariupol.” The City Council of Mariupol responded to the call of the invaders to surrender 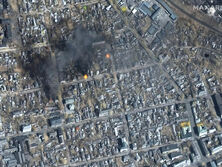 The authorities of Mariupol, Donetsk region, refused to comply with the ultimatum of the Russian invaders and surrender.

“They say the Russians are offering the mayor’s office of Mariupol to go over to the side of Russia. They gave us time until morning to formulate a response. And why wait so long if the answer is ready in advance: fuck you, not Mariupol,” wrote on Facebook on the evening of March 20, Advisor to the Mayor of Mariupol Petr Andryushchenko.

He clarifiedthat street fighting continues in the city, the invaders are shelling the city from aircraft and ships.

“As the occupation corps of Russia does not try to take control of the city and say something about the “victory”, our Armed Forces of Ukraine and the Azov regiment continue to turn the Russian elite into elite fertilizer and precious scrap metal. We believe in them. Our army is our pride,” – wrote Andryushchenko.

He informedthat in general, about 14,000 Russian soldiers are involved in the attempt to take Mariupol.

“This is almost 10% of the total number of the entire military group that has invaded Ukraine since the beginning of the war. Mariupol defenders hold back and paralyze the horde in its advance to the north of the region, towards Zaporozhye and the Dnieper. One theater. Two maternity hospitals. School of arts. A clear demonstration against whom Russia is really at war, – wrote Andryushchenko.

"The right place to find peace." Zelensky called Jerusalem a possible place for negotiations with Russia

To counter an invasion of rabid crabs, an American distillery transforms them into whiskey

We will not leave it like that. Ramzan Kadyrov