Gymnasium ‘Sami Frashëri’ ready in September/ Veliaj: The most beautiful school, this year we are opening 12 more schools 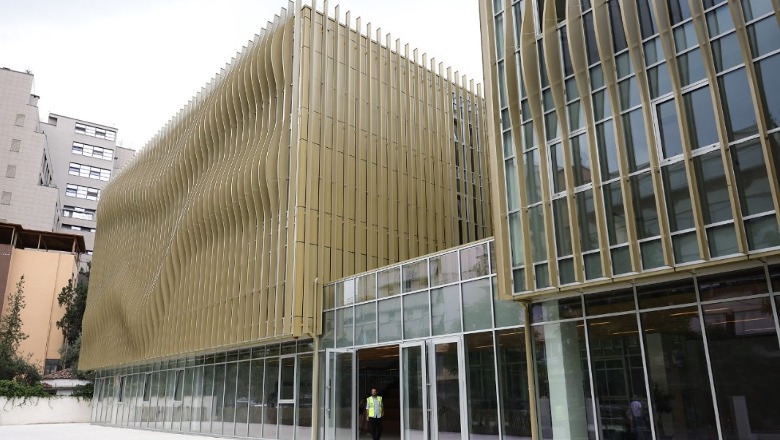 
The “Sami Frashëri” gymnasium, out of 40 new schools that have been built and are being built in Tirana, 12 of which open their doors this September, is almost ready to receive students after being rebuilt after the earthquake. Mayor Erion Veliaj inspected the last details in the building, with a capacity for 1500 students, and said that the new facilities are modern, with the most contemporary conditions.

“I am very happy when I see that the recent renovations are taking place, the railings are being installed, to have a limitation of the school territory, where we can do activities in the yard, etc. We also installed cameras, there is an air conditioning system; this school is no different from a five-star hotel, where everything is of the latest standard. It is undoubtedly the most beautiful school in Albania, but it is probably also the most beautiful in the region. I really hope that the real beauty will be brought by the boys and girls who will come and populate these supermodern premises in September”, he said.

Veliaj said that it is important to preserve the reputation of the school, not only as a building, but also in results and extracurricular activities. He said that with this investment, as in the other 40 new schools in Tirana, two-shift classes will end, while in the afternoon the new building will serve as a community center.

“We want the school to function as a community center in the afternoon, so we will spend the lesson in the morning. There will be no more lessons in the afternoon, but we will not leave it empty either because we can use it for the 21 clubs of ‘Sami’, to give space to anyone to organize activities in these premises. We will have an increased attention to school administrators, especially in this school, which is like managing a hotel when it comes to the pump system, maintenance, security cameras, air conditioning, or fire protection system, boilers, etc. With this school, we have given Tirana an unprecedented jewel in the quality of an educational building, but we have also raised the bar for other schools that come later”, he said.

A museum will also be built at the “Sami Frashëri” school, for all those who have contributed over the years to the name and the generations that have come from it.

“I want to have a museum part because ‘Samiu’ has probably been the center that has produced more talents and people who have made a contribution to the country. Our generation, ‘Sami’s’, has done some good things, but it has also done some bad things, so I would very much like the new generation of ‘Sami’ to be a generation that does only good things, that unites the country , which promotes our best values ​​and upholds the name of “Sami Frashëri”. Whoever plants education and culture invests in the future; who only plants wheat and corn invests for the daily stomach, but not for what is our vision, for the Albania of the future”, concluded Veliaj.

Truss reveals the route of Albanians trying to cross the English Channel by raft: I will deal with this issue personally

At night, the invaders shelled Kharkov: they hit a medical facility and residential buildings. Rescuers pulled two people out of the rubble

Defenders of Mariupol refused to leave the city – Zelensky

How can social media become addictive and addictive? These signs are dangerous

Symbols of the USSR, Russia and Ukraine were banned in the capital region of Germany on May 8–9 – media