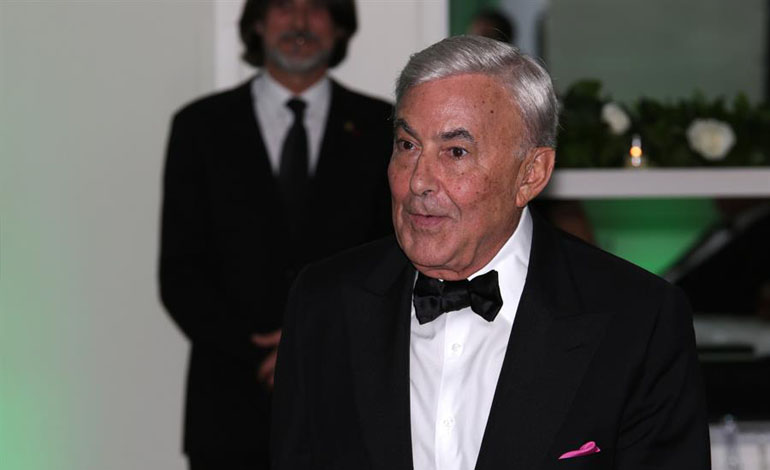 
Venezuelan businessman Gustavo Cisneroshead of a family business group with interests inside and outside his country, sees open «a door to hope» in Venezuela with the signs of economic improvement and the reestablishment of ties with Colombia, but it is missing “a constructive discussion”.

“Venezuela requires the union of government, institutions, political parties, companies, and citizens, of a constructive debate that allows us to recover that country of opportunities, progress, and well-being”says the president of the Cisneros Organization in an interview with Efe.

Founded in 1929 and with headquarters in Caracas, Miami and New York, the Cisneros Organization is a private company with global reach that specializes in digital advertising, entertainment media, real estate investments, social leadership and new technologies.

For this reason, the businessman replied to Efe in writing to the following questionnaire:

Do you believe that an economic “normalization” is underway in Venezuela?

The figures and forecasts on the Venezuelan economy during the year, not only from the government, but also from organizations such as the International Monetary Fund and ECLACshow an improvement in the situation in the country, which has once again reported economic growth and lower levels of inflation.

It remains to be seen how these first steps, which have benefited from higher international oil prices and the dollarization of the economy, will be decimated by the recession that seems to be cooking in the world and the persistence of some difficulties in supply chains and logistics in the world.

Undoubtedly, there is still a long way to go to recover economic activity and progress in Venezuela, but the signs we have recently had in economic matters open the door to hope.

You have just been awarded in the US, do you feel that you are equally recognized in Venezuela?

I am very grateful for the recognition of my family’s effort and the three generations that have made it possible to get here. My family and I made the decision to move to Miami many years ago, where more than 50% of the population is Spanish-speaking and has a culture so familiar that we felt at home from the first moment.

Venezuela will always be our home for us, it is the place where we grew up and where ideas began to materialize for the first time.

Today, what I seek is to be an example for those families formed by entrepreneurs who seek to achieve success, regardless of their place of origin.

For me that is what really counts, although I believe that our essence will always be present in Venezuela, as well as here in Miami, and in other places like the Dominican Republic, where we are very active.

What role should Venezuelan businessmen have and what do they essentially need from the Government to move the country forward?

In the case of my family, we have always believed that businessmen and the private sector have a duty to the society in which we live.

More than thinking about what we may need from a government, at the current moment in which Venezuela finds itself, it is essential to strengthen the capacities of Venezuelan businessmen to contribute to the development of the country.

We cannot forget that without a strong community, no business could survive.

The dialogue between the Government and the opposition has been at a standstill since June 2021. Do you have any hope that it will be reactivated again and can bear any fruit before the 2023 election year?

The incipient steps that have been taken in recent weeks to reactivate the dialogues and try to find intermediate points between two Venezuelas that are so distant contribute in the right direction. However, I do not believe that significant agreements will be reached before the electoral process next year.

Even so, I think it is important to continue looking for mechanisms so that all Venezuelans can work together to build the country we want. And, above all, that through these conversations solutions can be found to the conflicts and problems that continue to affect everyone, and not just the government or the opposition.

Imagine for a moment that you are a candidate and you reach the Presidency of Venezuela. What would be number one on your priority list?

Although it is an issue that has never been within my ambitions, and for me, the objective will always be to continue working from the private sector to contribute to my beloved Venezuela from the areas and investments that we develop in Cisneros; I believe that the priority that the country must focus on at this time is to rebuild a vibrant civil society.

From the Venezuelan government they say that after the mid-term elections in November, the president of the United States, Joe Biden, will give a new direction to his policy towards Venezuela. What do you think about it?

Undoubtedly, the influence of the United States government and its foreign policy in the situation in Venezuela can contribute to improving the conditions so that we Venezuelans can demonstrate greater political maturity and resolve the differences and conflicts that afflict us.

I believe that the new approach that has been tried from the White House can create a more positive environment of opportunity in the country for reconfiguring our differences and making decisions that allow us to build the path of peace, reconciliation and growth.

How can Gustavo Petro’s arrival at the Presidency of Colombia and the reestablishment of diplomatic relations influence the march of Venezuela?

Due to the long border shared by both countries and the close relations between our people, the reestablishment of diplomatic relations between both governments and the reopening of the border, I believe, will bring important benefits to the communities and the business sector of Colombia and Venezuela.

A scenario that can reactivate trade between both nations and, with it, can contribute to the improvement of issues such as the supply of essential products, access to industrial supplies to improve the productivity of our industry and the counting of the millions of compatriots who in recent years they had moved to Colombia in search of better living conditions.

How do you see the situation in Latin America today?

Latin America is currently going through turbulent times, but they are typical of the change and growth of a thriving region. However, the health crisis (the covid-19 pandemic) has slowed down the path, because nobody was prepared and, at the time, even for the most developed countries it was something totally unknown.

But it should be noted that many countries in the region had an outstanding response to the pandemic and that speaks highly of the installed capacity they have developed. Leaving aside the turbulent moments, I believe that Latin America is on the right track and what is currently happening are moments of adjustment based on the different internal and external problems.

Minister of Equality of Spain: «Children have the right to have sexual relations with whoever they want»

WhatsApp already allows you to react to messages on Android

The judge fell asleep during the court hearing

Itchy hands and feet can be a symptom of this disease

Techno dog: learned to use the computer to see cartoons