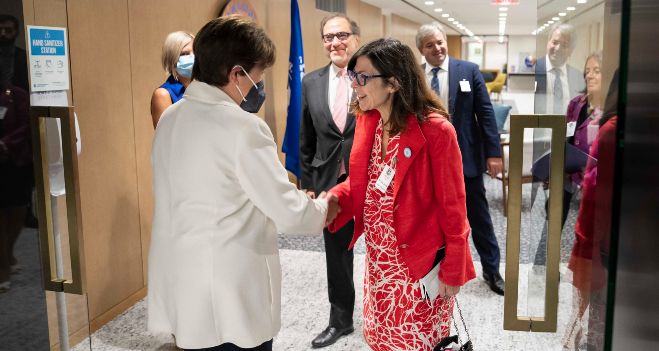 
The head of the International Monetary Fund (IMF), Kristalina Georgieva, highlighted on Monday the “initial efforts” of Silvina Batakis to “strengthen fiscal sustainability” in Argentina, after the meeting they both held in Washington.

After the meeting, which took place at the IMF headquarters in Washington, Georgieva wrote a message on her Twitter account, in which she said that the meeting was “productive” and referred to the “economic and social challenges of Argentina” .

“Another productive meeting with Minister Silvina Batakis. We welcome his initial efforts to strengthen fiscal sustainability and agree on the importance of the decisive implementation of the program to address Argentina’s economic and social challenges,” he wrote.

The meeting between Georgieva and Batakis was the first they had face to face since the economist took over as head of the Ministry to replace the outgoing Martín Guzmán, and it took place during her visit to the US.

The meeting was part of the official’s trip to the US, which has among its main objectives that its interlocutors “listen and know how the new official thinks”, in addition to presenting the action guidelines that the Argentine Government will take in economic matters, he indicated. This morning to Télam, Ambassador Argüello.

Georgieva was very interested in meeting the new Argentine minister, since “she had planned to take vacations this week” and decided to postpone them in order to receive Batakis, sources from the multilateral organization told Télam.

Although the tension in the markets does not cease, the blue dollar collapsed to 321 pesos

Kolomoisky probably lost his Ukrainian citizenship. His passport is marked as “invalid” in the database of the migration service – media

“Condonizate!”: The new ASSE campaign, for the entire country, prior to the Nostalgia Night

“They’re really only capable of slag.” Tsymbalyuk spoke about Russian actors who starred in TV shows in Ukraine