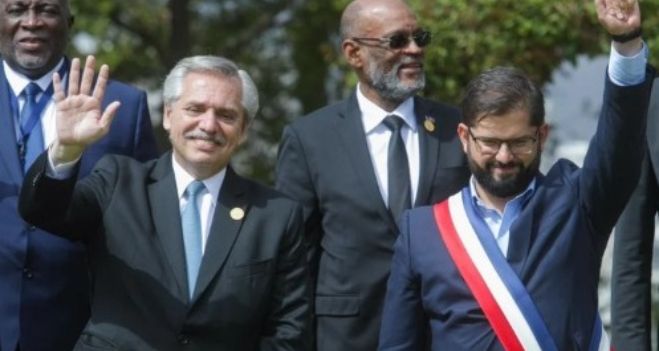 
The new Chilean president Gabriel Boric will undertake his first international trip to Argentina today, an inaugural destination that was a tradition among Chilean presidents until Sebastián Piñera.

Boric will arrive around 3:40 pm today at the Ezeiza Airport with a large group of ministers, parliamentarians, ministers of the Supreme Court and Chilean businessmen to fulfill an intense bilateral agenda. He will be received by Foreign Minister Santiago Cafiero.

His official activities will begin on Monday morning when, together with the Minister of Foreign Affairs, he will make a floral offering at the Monument to the Liberator General José de San Martín. Then, the Chilean president will be received at the Casa Rosada by Alberto Fernández, at the same time that an interministerial meeting between officials from both countries is scheduled. At night there will be a gala dinner at the CCK where artists such as Víctor Heredia, Chango Spasciuk and Inti Illimani will perform.

Boric also has a visit to the National Congress on the agenda, where he will be received by both Vice President Cristina Kirchner and the President of the Chamber of Deputies, Sergio Massa.

On Tuesday at 9:30 a.m., a business breakfast will be held with the participation of actors and business leaders and the energy sector from Argentina and Chile, which will also be attended by the Minister of Production, Matías Kulfas; the Secretary of International Economic Relations, Cecilia Todesca; the ambassador to the Republic of Chile, Rafael Bielsa, the Chilean Minister of Energy, Claudio Huepe Minoletti, and the Undersecretary for International Economic Relations, José Miguel Ahumada

Opposition parliamentarians such as Paulina Núñez from Renovación Nacional, Eric Aedo from Democracia Cristiana and the leader of the Independent Democratic Union, Javier Macaya, and Chilean businessmen will also travel on the presidential plane.

Urrejola announced that he hopes to address issues such as migration, trade and “get out of the differences in which the agenda between neighbors was concentrated”

Boric will also seek to arrange a meeting with the Mothers of Plaza de Mayo in the Memory Space that works in the former ESMA.

Before embarking on his trip to Argentina, the assassination of former senator Jaime Guzmán, who was also the right-hand man of dictator Augusto Pinochet, was commemorated in Santiago. Around the ceremony that took place in the general cemetery of Santiago, located 4.5 kilometers from the city center, where his remains lie, the president of National Renewal, Francisco Chahuán, made a call to Boric .

“I want to ask and question the President of the Republic, that during his visit to Argentina, which is his first visit outside the country as president, ask again and demand the extradition of Galvarino Apablaza so that he comes to appear in court.”

Galvarino Apablaza has been living in Argentina for more than 20 years and is being prosecuted in Chile for the murder of Jaime Guzmán. And he is considered a political refugee since he granted himself that status during the government of Cristina Kirchner in 2010.

“We are not going to endorse impunity. It seems that some want to establish impunity in our country by generating pardon and amnesty bills, but when it comes to judging the cowardly murder of a senator in a democracy, they look to the side. President Boric, we demand that the murderers of Jaime Guzmán appear before the courts of justice”, added Chahuán.

Frightening increase in COVID cases! 550 citizens are infected in the last 24 hours in Albania

ANNOUNCED The former Filipa Cara was fiercely entangled: She will be sealed with a public se*som

A new case of coronavirus disease has been confirmed in Artsakh. A case of death was registered