Francis called for an Easter truce to negotiate peace in Ukraine: “Christ is crucified again” 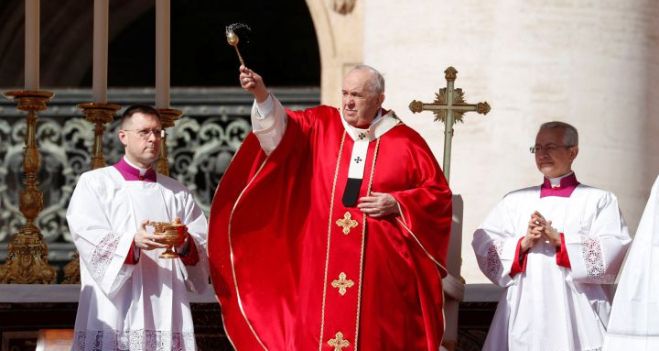 
“In the madness of war, Christ is crucified again,” Pope Francis said as he celebrated Mass on Palm Sunday at the Vatican. So too, he called for an Easter truce to start a real negotiation and thus reach peace.

“When violence is used, nothing is known about God, who is the Father, nor about the others, who are brothers,” he began by saying during the ceremony in Saint Peter’s Square.

Referring to the war between Russia and Ukraine, he said: “We forget why we are in the world and we come to commit absurd cruelties. We see it in the madness of war, where Christ is crucified again. Nothing is impossible for God, not even stopping a war whose end is not in sight that every day puts before our eyes atrocious massacres of cruelty against defenseless civilians.

And he added: “Let’s lay down our weapons, let’s start an Easter truce, but not to reload our weapons and resume fighting, to reach peace through true negotiation, even willing to make some sacrifices for the good of the people.” What victory will be the one that plants a flag on a mountain of rubble?

“Christ is nailed to the cross once again in the mothers who mourn the unjust death of their husbands and children. He is crucified on the refugees fleeing the bombs with children in their arms. He is crucified in the elderly who are left to die, in the young deprived of a future, in the soldiers sent to kill his brothers”, he continued about the losses left by the war.

Josemaría: key day for the mining project in which more than US$4 billion will be invested

News at the Gyumri maternity hospital. will detect defects in unborn children

A girl, a rape victim, managed to abort in Brazil after pressure from a judge