Fatal fire in a bowling alley in Thailand: at least 13 dead and 37 injured 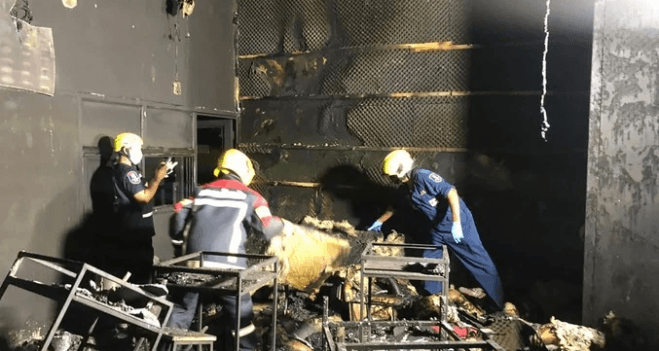 
At least 13 people died and another 37 were injured as a result of a fire that started during the early hours of this Friday in a bowling alley in the Thai province of Chonburi, about 160 kilometers southeast of Bangkok, the capital of that country.

Three of the fatal victims were under 20 years old. while more than thirty of the injured are still hospitalized in two hospitals in the region, with different levels of severity, as explained by the captain of the Plutaluang Police, Boonsong Yingyong, in dialogue with the EFE news agency.

The flames broke out around 1.25 on Friday at the Mountain B nightclub, as reported by the Sattahip district rescue teams, who also specified that four women and nine men lost their lives.

13 people have died and over 40 have been injured as a result of a heavy fire at a pub in the eastern Thai province of Chonburi.
The incident took place at the Mountain B Pub in the Sattahip district.#Thailand #night club pic.twitter.com/wy33y2j2w7

While investigating the causes of the fire, which are still unknown, the authorities reported that They took the owner of the place and some workers to a police station so that they could give a statement about the events. In addition, they investigate the license conditions of the bowling alley.

For its part, the Thai government announced the inspection of the “structures and safety” of other entertainment sites “in order to prevent further fires.”

“Amusement venues that are not up to standard or following the rules should work on improving them before operating as usual,” warned government spokesman Thanakorn Wangboonkongchana, in an official statement that was released after the tragedy.

Witnesses who were at the bowling alley stated that the strong flames were first seen on the ceiling of the nightclub and that they “spread quickly” throughout the building due to “acoustic foam” typical of those places, according to police sources.

A local DJ told the PPTV television station that the flames spread in about a minute, when he heard the sound of an explosion that shattered the windows.

Meanwhile, firefighters reported that they needed more than two hours to control the fire due to the large amount of flammable material inside the premises, such as air conditioners and sound insulators.

On social networks, several of the witnesses to the event posted videos containing sensitive images that quickly went viral. In them, a cloud of black smoke is seen which is followed by a loud explosion.

Then the flames that were on the roof take over the whole place. Through the door, several people can be seen running away in desperation and then throwing themselves on the ground, trying to put out the fire that had caught their clothes.

Thailand Fire in a bowling alley

At best, Azerbaijan can cover about 5% of EU gas demand. Vahe Davtyan

Santiago Cafiero told how the G7 summit was and crossed Macri: “I was going to show how he kicked free kicks”

“You are a lawyer, you can defend yourself”: Barby Franco went to ‘LAM’ and stoned Elba Marcovecchio