Faced with the war in Ukraine, the video game industry is an example of solidarity

February 24, 2022 the sirens sounded in the Ukrainian capital and several major cities across the country to the surprise of locals. In the space of one night, tens of thousands of Ukrainians fled in haste, leaving friends, colleagues and employers in France and Europe helpless in the face of the situation without news.

Against all odds, an extraordinary solidarity quickly formed in the European video game sector, employing thousands of employees in Ukraine. Companies and developers have been working since February 24 to locate, house and finance aid to Ukrainian workers forced to abandon their homes to find refuge.

The Polish company 11 bit studio was the first to lead this momentum of solidarity. In its public announcement, the studio pledged to donate all profits from the sale of its game This War of Mine to the Polish Red Cross and to do what is necessary to provide assistance in the form of accommodation, infrastructure, employment and transport to anyone who requests it.

Quickly, this announcement was followed by the entire video game industry. Studios such as CD Projekt (The Witcher), Crytek (far cry) or Bungie (Halo) committed financial aid and went so far as to restrict their sale on the Russian, Belarusian and Chinese markets.

the SNJV (National Video Game Syndicate) was quick to make a joint announcement with the EGDF (European games developer federation) condemning Vladimir Putin’s offensive against Ukraine and urging European developers to put in place all possible humanitarian aid. This political speaking out is unprecedented in the sector, both for ethical and reputational issues.

According to Konrad Adamczewski, spokesperson for 11 bit studios, the decision to publicly announce support for the Ukrainian people and offer logistical assistance was not easy. It was necessary to consult with the Ukrainian and Russian employees and to take the measure of the risks that this implies for each: “Our CEO spoke to each of these people to ask them what they thought of the company’s position. All agreed that we must act and take a stand for the good of the free world and the free nation of Ukraine.”

Ukraine calls on PlayStation and Xbox to ban Russian gamers

The studio quickly mobilized to provide all the logistical assistance necessary to accommodate employees and refugees. Starting by collecting food and medicine, but also books, toys and everything necessary for those who fled with their pets. The human resources department is in contact with the local support points to find out about logistical needs. Some members of the development team even went so far as to take their cars to the border to distribute these goods and bring the refugees safely back to the Polish capital.

The French Ubisoft and Gameloft have set up a team specially dedicated to monitoring the situation. We read in their respective statements that the situation has been taken very seriously since the beginning of February. Internal communication channels make it possible to reassure staff and support them.

Our hearts and thoughts are with Ukraine. 💙💛 pic.twitter.com/lu5XBo6GKV

Faced with this surprise war, the nerves are put to the test. Many Ukrainians did not imagine having to leave their homes. Some, because of their work, find themselves separated from their families, blocked under the bombardments. It is therefore crucial for the employer to manage the psychological aspect of the situation.

Konrad Adamczewskin testifies in this sense: “All of our employees affected by the situation can benefit from free psychological help. Additional days off are available for those who wish.

The example ofArtStation, the largest network of video game professionals, is revealing. He now sees messages of calls for help from desperate Ukrainians flourish. Like that of Aleksandr P. which offers 1,000 euros to anyone able to escort a woman and child from kyiv to the Polish border. What is remarkable is that a link has been created within the community, pushing the developers to intervene on the forums of ArtStation rather than Twitter. They know that they are being listened to and that people are ready to roll up their sleeves.

Why there are no civilians in war games

From the point of view of employers, this unprecedented crisis is a real test of confidence. Pierre de André, director of the French startup Doublejack, found himself confronted with the flight of Yulia, character artist within the company, who left Dnieper with her family for Moldova as soon as the first sirens sounded.

He tells: “Overnight, Yulia felt immensely precarious. With the flight and the fact that her husband is called upon to fight, she must ensure the material security of her family on her own. Our priority was to reassure her about the stability of her job and to provide her with a means of payment in a stable currency to let her focus on the main thing, her security.”

He remains in daily contact with his employee: “She must be assured of our involvement and that she does not feel that we are indifferent to her situation.”

Because in addition to being uprooted from their homes, Ukrainians fear falling into poverty, deprived of their jobs and their savings. The country’s banks are no longer safe and the national currency, the hryvnia, is collapsing. Cash becomes vital, preferably in euros.

In this context, some employers like Pierre de André have had to open an account in the name of their employees and organize themselves so that the bank card can be recovered at an address in a border country.

Video game companies had to take the lead, like Gameloftwhich offers salary advances, a donation of more than 600,000 euros distributed among employees still on site and a restructuring of its European studios to help relocate Ukrainian refugees at the company’s expense.

Ukraine raises ‘IT army’ against Russia

The 11 bit studios spokesperson encourages the community to offer internships and jobs to exiled workers as a priority: “In the long term, we will use our relationships with universities and other businesses to help find jobs in game development. We have already launched an internship for five students from Ukraine. Other studios in Poland have followed suit and are also starting internships.”

Galvanized by this surge of solidarity, the community of European developers even created a file that can be viewed by everyone and allowing companies to offer free use of their premises and infrastructure to exiled workers.

A position not without risk

However, all these examples of sincere and communal solidarity are not viewed favorably by some. Russian and Chinese trolls are setting themselves up to silence those who condemn the war and damage corporate reputations. Poles at 11 bit studios quickly noticed a wave of negative reviews on sales platforms like Steam. By playing with the logic of the algorithm, they sought to pass unnoticed the Red Cross fundraising campaign in the eyes of the greatest number. Emails from Russian fans outraged by the anti-Putin stance have also been received. 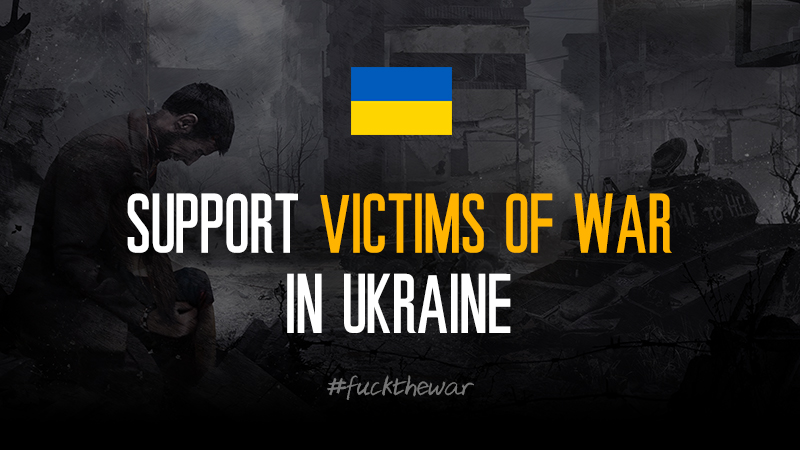 CD Projekt, a major player in Poland, went so far as to suspend the sale of its games in Russia and Belarus. This decision is not without consequences for the company’s economy and demonstrates real support for the Ukrainian cause. Indeed, the studio specifies in its press release that this also includes games distributed by GOGits digital distribution platform, essential on the market.

In Russia, the risk for a company to speak out against Putin’s policies is very real. Few dare to do so. Yet among them stands Ice-pick Lodge, a Russian studio with workers from Ukraine and Russia in its ranks. By declaring on Twitter that it has never voted for this government or supported its policy, the studio runs the risk of suffering economic sanctions and seeing the developers who signed this declaration arrested.

These events caused the video game industry to take an unprecedented political turn. Often relegated to simple entertainment, video games are nevertheless a vector of message of peace and inclusiveness, according to Konrad Adamczewskin. It is therefore quite normal that the workers of such a multicultural and freedom of thought industry rise up uniformly against the bellicose policy of a state.

The title of 11 bit studios, This War of Mineis also the first game to enter history programs for its realistic experience of a group of civilians trying to survive in a besieged city, in a context of war inspired by events in the former Yugoslavia.

By way of demonstration, the studio’s spokesperson ends his argument with this testimony, received on 1er March 2022 for developers: “After fleeing Donetsk in 2015, a player named Olga started playing This war of mine. She then replaced the characters in the game with her friends and created a world where she could survive with them. Years later and now holed up in a bomb shelter, scared of the bombs, she thanks the team for creating an experience that allowed her to understand war. When courage runs out, Olga imagines being back in the game, surrounded by her friends with the same goal in mind: to survive.

They are headlines Thursday #24Mar

Fier incinerator, 30 workers in protest: We have not received salaries for 4 months

Kovid is 15 times more likely to re-infect after omicron

Results, goals and classification of the fourth day of the 2022 Season