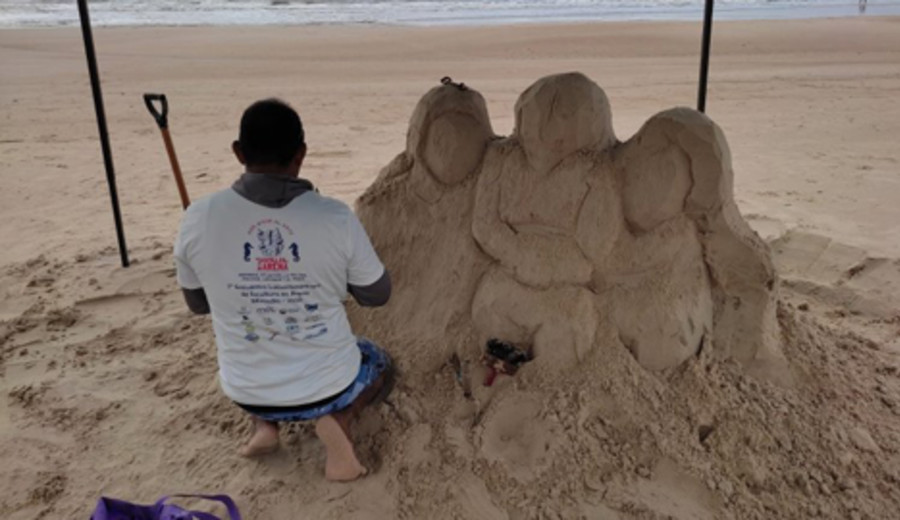 
CANELONES (Uypress) – Ephemeral art is present on the beaches of Ciudad de la Costa with the ninth edition of Castillos en la Arena, an event that brings together prominent Latin American sculptors to share this cultural manifestation and fraternize.

The descents 16, 19 and 25 of the beaches of Ciudad de la Costa were chosen to develop the sculptures and carry out workshops aimed at children and groups of people with disabilities, with the purpose of bringing this art and the different techniques that are They use sand to mold people.

The Acting General Director of Culture of the Canelones Municipal Government, Jorge Schellemberg, maintained that the artistic manifestation of Castillos en la Arena generates “a cultural impact and an approach to a cultural event for a lot of people who arrive mostly unaware to our beaches” and comes across “these beautiful sculptures; one is also surprised by how they can put together something so beautiful and well cared for in such a short time”.

Schellemberg stated that ephemeral art enables another way of “approaching sensitivity, another way of moving and surprising us”, and that the Department of Culture of the Government of Canelones has been supporting it since its inception, together with other departments and also through working in partnership with private companies. “I want to highlight the public-private participation for this undertaking. Coordination so that many artistic and cultural events can take place is very important and we believe that it generates a lot of beautiful things for people,” he said.

History of Castles in the Sand

Dumas Teixeira is a sculptor and organizer of Castillos en la Arena since its inception on the beaches of Marindia, in 2014. He called this event the Latin American Fellowship Meeting and commented that this ninth edition brings together sculptors and artists from “different ethnic groups and Latin American peoples “, although another continent usually intervenes as a special guest. “A very important group of artists from different Latin American countries, as well as European and Asian ones, has been achieved around an idea that is non-competition, it is purely and exclusively brotherhood,” he explained, and indicated that, unlike other similar meetings that are made in the world, Castles in the Sand is not competitive, which allows “sculptors to work much more relaxed and share the different techniques among themselves much more”.

As a result of the pandemic, this year’s meeting was held in a hybrid mode, with six countries participating in person, with nine sculptors (Mexico, El Salvador, Peru, Bolivia, Argentina and Uruguay) and seven virtually, who send their works through videos, which are published and then certificates of participation are sent to them.

Top-level sculptors participate in the event, “most of them are from art schools, they not only make sculptures but also paint, but mainly those who come here dedicate themselves almost exclusively to sand sculpture and live in their countries Apart from that, they participate in world tournaments,” assured Teixeira.

According to the organizer, Castillos en la Arena is “the first event of its kind in Latin America and the most important, which means that Uruguay is being the capital of ephemeral art in Latin America”, despite the fact that other countries such as Mexico, Colombia , Peru or Brazil have a large number of sand sculptors and that “when we started here there were no sand sculptors in Uruguay”.

Workshops as a way of disseminating and sharing knowledge

Teixeira reported that one of the objectives of the meeting is to bring this artistic modality closer to Uruguayan sculptors and also “generate an interest in this art in children.” He considered that “excellent results have been achieved”, since during the presentations of Castillos en la Arena there are workshops for boys and girls and for people with disabilities. During the workshops they are given tips so that they can “express themselves in the sand” with more techniques.

Inclusion as a premise

The Head of the Disability Area of ​​the Government of Canelones, Federico Lezama, reported that within the framework of the Mar al Alcance proposal, which is being carried out on several beaches in Canelones, “other cultural, recreational and sports activities have been promoted”, as a workshop for people with disabilities, within the activities of Castillos en la Arena. “We are carrying out a proposal for recreational activities where more than 30 people with disabilities from the City of the Coast are participating; they are people who generally do not have access to these spaces and these proposals and it is a way of democratizing the city,” said Lezama, and He added that the Intendancy facilitated transportation so that the participants could reach the beach.

A proposal from Canelones

For his part, the Director of Tourism, Horacio Yanes, stressed that the proposal for Castles in the Sand was born in Marindia “in a rather humble way” and from the different directions of the Canelones Administration, as well as the municipalities, work has been done to boost it. “It is something that was born in Canelones, as a beautiful initiative that we support and that already has a life of its own,” he asserted, while highlighting the fact that in this ninth edition the proposal is touring the beaches of different departments.

About the workshop that was carried out with people with disabilities, Yanes pondered that accessibility is relevant not only from the concept of being able to get to a place without impediments, “but also being able to have fun, practice art, sports, whatever, without no type of obstacles”, and that for this reason tourism must be ensured for all, because “it is a human right”.

On May 8 and 9, occupiers may arrange massive shelling of Ukrainian cities – NSDC

ASFU responds to the MSP by protocol for parties and unvaccinated: “We authorize dances ONLY with vaccinated”

The invaders fired at the Severodonetsk hospital – Gaidai. Video