Duda hopes that Ukraine and Poland will be fraternal countries for decades and centuries, and “there will be no more borders” between them 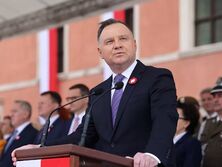 The President of Poland noted that the history of the two countries in recent centuries was not easy.

“For all the grandeur of this story, so difficult in recent centuries, where so often on the common table of Poles and Ukrainians there were a gun, an ax, weapons, they put bread. This is an act that – I deeply believe in it – paves a completely new path in our history, in the history of both our and other peoples,” he said.

Duda also thanked the public services of Poland and the local authorities of the country for decisions aimed at supporting Ukraine.

“The time of challenges that we are witnessing has begun, but has not yet ended,” he said and warned the Poles that there are “many more difficulties and worries” ahead, since the sanctions policy aimed at forcing the Russian Federation to stop aggression is “expensive “.

“We must survive this, we must pursue a responsible policy, we must fight it. This is a modern challenge, which especially concerns those in power,” Duda continued.

He said that it is also about responsibility for the future of the region and building good neighborly relations with Ukraine.

“I firmly believe that we can do this. That just as we were able to accept our neighbors, we can protect them so that when the war is over, they can return to their homes and we can help them in the work of rebuilding Ukraine: a free sovereign and independent Ukraine, which I hope will decades, and maybe, God forbid, for centuries a brotherly state for Poland, and as I hope, Zelensky prophetically said, there will no longer be a border between our countries – Poland and Ukraine. This border does not actually exist. That we will live together on this earth, building and rebuilding together our common happiness and common strength, which will allow us to repel any danger or any possible threat,” Duda summed up.

"If everyone in the world were so brave, we would have ended this war by now." Zelensky appealed to the peoples of Ukraine and Britain

They choose the winners of Miss Nationalist 2022

Martín Guzmán, the ball-puller: the minister raised a strong defense of his management

“In the stadium as a Roma fan”, will Totti come to Tirana?

Russia Ukraine War: Ukraine can defeat Russia, the war is not going as per Moscow’s plan – NATO chief’s big statement

Pulitzer Prize recognizes the work of Ukrainian journalists in the war