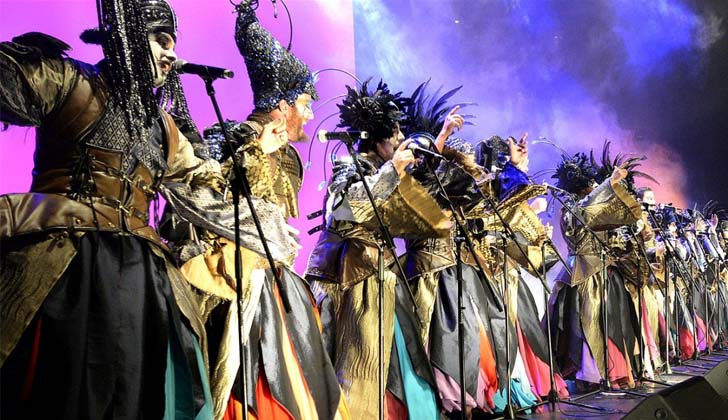 The cycle will take place from January 3 in 7 rooms of the Intendancy and one independent: Verdi, Jorge Lazaroff and Malvín Experimental rooms; cultural centers Florencio Sánchez, Terminal Goes and Artesano; Sacude complex and La Candela theater.

There will be 97 performances of 26 shows, all with free admission.

This is the ninth edition of the festival that takes place within the framework of the Program for the Strengthening of the Arts, carried out by the Municipality of Montevideo, the Uruguayan Society of Actors and the Uruguayan Federation of Independent Theaters.

Montevideo of the Arts Music

Musical shows with free admission at the Solís Theater as part of the Strengthening of the Arts Program.

The “open-air cinema” season opened in December with the “Cinema at the Botánico” cycle.

As of Tuesday, January 4, it is the turn of the “Summer Cinema” cycle. During the months of January and February, once a week, the itinerant screen of Montevideo Audiovisual will tour various points of the city.

«Summer cinema» will be installed in different points of the department:

Plaza of the Growing Complex of Flor de Maroñas

A new edition of the Carnival of Promises is held at the Ramón Collazo Summer Theater.

The stages will begin at 8:30 p.m. and two rounds of nine days each will be held. Once these instances are finished, the awards will be delivered to the participants.

Tickets will be on sale at the Summer Theater box office starting at 7:30 p.m. No vaccination certificate will be required for entry and the seats will have a value of $200 for the general public and $100 for former members.

The meeting is scheduled to take place until approximately January 10, but the date is subject to change depending on suspensions due to rainfall or bad weather.

Guided visits to the Summer Theater

The visit will allow visitors, as well as groups previously scheduled, to tour the facilities, learn about part of the history of this emblematic place and the dynamics of the city’s entertainment center.

The visit lasts approximately one hour and involves a journey through different stations with images, projections and information provided by the team.

Days and times (groups and institutions): Tuesday and Thursday to coordinate.

Groups of educational institutions – schedule in advance via email: [email protected] detailing the following information: name of the institution, grade of the course, number of students and adults, possible dates and times they would like come to visit.

The Montevideo Carnival will have its three traditional parades: official, samba school and Llamadas.

The first two, which will take place on January 20 and 21, respectively, will change locations along Cachón Avenue in Rodó Park, while the Llamadas parade will once again return to Isla de Flores Street on February 3 and 4.

As of Tuesday, December 27, registration for the summer workshops at the Complex Shake will be open.

Those who are interested in holding a workshop must attend the Complex in person with:

Registration must be done by a person of legal age. Although the person to be registered has participated in the annual workshops, they must carry out this registration anyway.

Access to Lecocq Park will remain free only for those under 12 years of age, people with disabilities, people over 70 years of age and holders of the Montevideo Libre card as of Saturday, December 11.

By Resolution 342/21/8000, in order to make entry more agile, a change was made in the ticket collection modality that consists of the elimination of the cost per additional passenger in vehicles and the definition of a single price per vehicle.

The new prices are:

Motorcycles and birodos with motor: $ 70

Punta Espinillo Park during the summer season will remain open 24 hours a day. Between the hours of 10:00 p.m. to 6:00 a.m., visitor entry data will be recorded. The public restrooms will remain open from 8 a.m. to 6:30 p.m. The only campsite that will be enabled is the private campsite managed by the concessionaire.

The Museum is open from Monday to Saturday from 9 a.m. to 1 p.m. and the exhibition “Acts of painting. Variaciones de Cracco» carried out by participants of the Fresco Painting Workshop of the Torres García Museum.

The cycle, in coordination with the “Vacaer Cirque” collective, will take place every Sunday from 7:00 p.m. in Plaza Huelga General. From January 23 to the last Sunday of February with free admission, the following confirmed activity will be presented so far:

February 6: Collective of the Coast

February 13: Collective of the West

The Own Cinema Cycle in Sala Zitarrosa

The cinema itself is a cycle made up of films that are characterized by presenting new angles for national cinematography.

This year is dedicated to comedy, a genre that during 2020 and 2021 stood out on the billboard of national premieres. So we open the film season with this cycle to enjoy four films that have humor as a common factor, based on singularly lovable characters.

Thursday in February at 8:00 p.m. with free admission

QUALIFICATIONS January 29, 2022, 02:19 a.m. Peru defeated Colombia on a visit and is located in the direct qualifying zone to Qatar

This is a classic example of organ donation; Jijith killed 5 people

The Copa Libertadores champion who dreams of directing River: “I would like to”