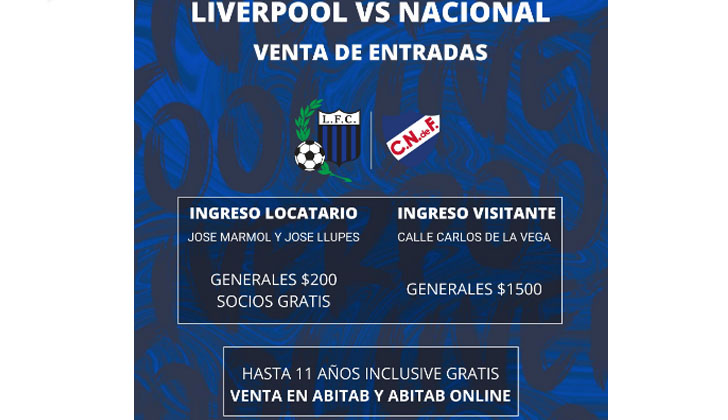 
On Sunday the 14th, Liverpool will receive Nacional in Belvedere for the third date of the 2022 Uruguayan Clausura Championship.

The Negriazul team fixed the value of the tickets for the visit at 1,500 pesos and at 200 pesos for the tenant partiality. This generated a strong controversy and the annoyance of both fans and tricolor leaders.

The director of Nacional, Gustavo Amoza, criticized the prices and the president of Liverpool, José Luis Palma.

In the last hours, Liverpool issued a statement in which it expresses its categorical rejection of Amoza’s “inappropriate and ill-intentioned statements, which not only contribute to the promotion of circumstances that generate violence (by saying that ‘we will have to go to the stands cheap’), but also incurs a lack of respect towards Liverpool by saying that “shame is stealing and being seen”.

Liverpool understands, on the other hand, that Sunday’s game will not only be for the lead of the Annual, but will also be “the first opportunity that Uruguayan soccer will have to see a top soccer figure at a world level just three meters away, in an official match”.

The Belvedere club also indicates that the prices are not far from those determined by Nacional to face Goianiense (2,500 pesos) or Rentistas (1,000 pesos) or the presentation of Suárez as a new player for the club.

The distribution of income registered an improvement in the first quarter, according to the Indec

Suipacha: the first triumph of the war for independence

We do not notice them, but they can slowly hurt us / 7 things you should give up