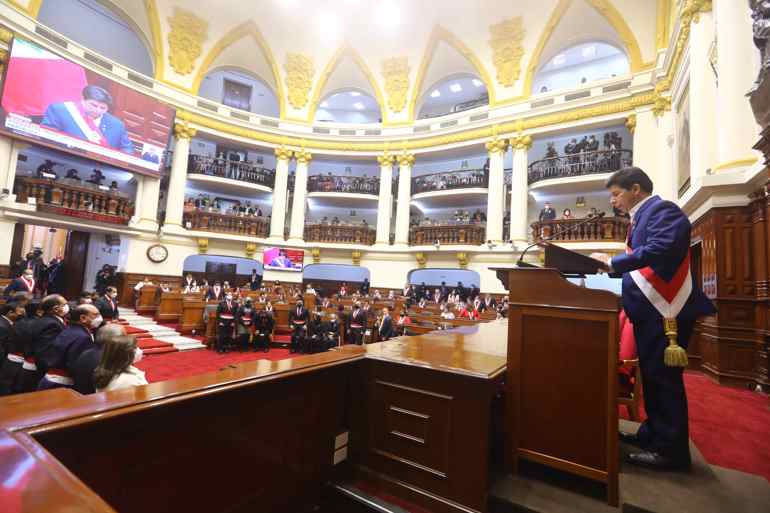 
The Congress of Peru denied President Pedro Castillo permission to attend the acts of transmission of command of the elected president of Colombia, Gustav Petro.

During the voting there were 67 votes against, 42 in favor and 5 abstentions, with which the Parliament denied the permission that the Peruvian presidents must obtain from the chamber for any trip abroad.

“We are in an unprecedented presidential crisis and I think that at this moment the president should send (to Colombia) his vice president or the foreign minister, but I think that the The president must be here, show his face and declare and explain the acts in which he is involved”said former Congress president María del Carmen Alva, of the right-wing Popular Action party, when taking the floor.

For his part, congressman Juan Carlos Martin Lizarzaburu, of the Fujimori Popular Force, affirmed that Castillo “He is going to want to escape” if he goes to Colombiafor which he asked that “send the chancellor and stay assuming responsibility.”

For her part, Katy Ugarte, from the Peru Libre party – with which Castillo became president – affirmed that the Peruvian head of state “He has been collaborating in the investigations that the Prosecutor’s Office has opened against him” and stressed that “he would never flee the country.”

Castillo went to the Prosecutor’s Office, where He stated that he is not part “of any criminal network”as he later clarified to the press.

According to the complaint opened in the Prosecutor’s Office, Castillo is suspected of having granted promotions to two Army officers, three from the Air Force and two from the National Police irregularly and with the participation of former Minister of Defense Walter Ayala and his former presidential secretary Bruno Pacheco, also implicated in other cases against the president.

Pacheco surrendered to Justice in July, after several months on the run, and has offered himself as a collaborator with the Prosecutor’s Office in the open investigations against Castillo, including the crime of criminal organization, among others.

The head of state, who completed a year in the Executive on July 28, is also being investigated for alleged irregularities in the award of the construction of the Tarata bridge and the purchase of biodiesel.

Also in the alleged plagiarism of his master’s thesis, in military promotions and in the alleged obstruction of the search and capture of former Minister Juan Silva and his nephew Fray Vásquez, implicated in these cases.

*With information from Efe

In Zaporozhye began to remove protective structures from the streets, citizens are asked not to panic

These things you do in the morning are making you healthy