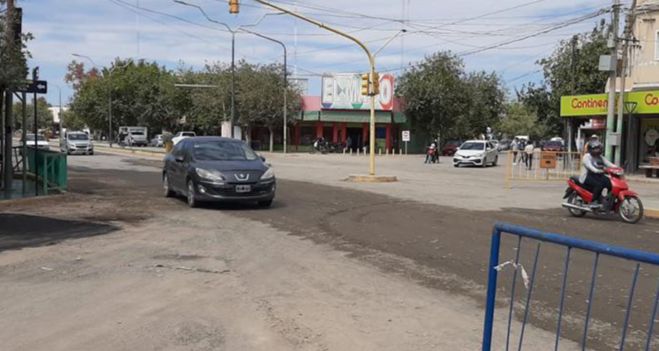 
The delayed work on the Caucete sewage network, to which the renovation of part of the drinking water line will now be added, has generated strong concern among merchants, especially those who have businesses in the department’s main artery, the Diagonal Sarmiento. It is because they complain about the lack of work planning and the serious damage it is causing them. Among the main ones, they mention the drop in sales due to difficulties in moving around, the loss of merchandise due to the dust in suspension generated by the work and which also causes health problems such as respiratory diseases.

“There is a continuous discomfort of the merchants due to the poor management, slowness and ineffectiveness to carry out the work of the sewers, leaving debris, accumulated earth when circulation is enabled and above all the lack of constant irrigation of the streets to placate the loose soil,” said Luis Agulles, president of the Caucete Chamber of Commerce. The problem is aggravated, he said, because now the renovation of part of the drinking water line will also come, which will take even longer the broken streets. “It could have been planned better because it was already known that the pipes had to be renewed,” he added. From the entity they point to OSSE for not controlling the company and the municipality for not demanding greater speed and organization in the work. Mayor Romina Rosas did not respond to calls from this newspaper to ask her about the issue.

The work on the sewers began in September 2018 and should have been completed two years later, but the company in charge of the work had delays, they intimidated it, and in the end they removed the task for breach of contract. Later, the provincial government awarded the work to a new firm, Senda SRL, which resumed the task in mid-2020. Although it was initially estimated that the execution would end at the end of last year, the complexity of the work and the complications in the pace of work due to covid-19 and its impact on the staff, delayed the work, which they calculate will be finished by the end of this month or next. The problem is that later the installation of drinking water pipes will continue as well as broken streets for at least three more months.

Adriana Rugani, owner of a car parts store on Diagonal, said that “the water pipes were already known to have to be renewed and that is why they could have been planned better. The municipality should have controlled more and required OSSE to to rush the company”. And about the impact on her business, she mentioned that “I have clients from many nearby departments, such as 25 de Mayo, San Martín and Angaco, but with the broken streets they don’t even come.”

Another merchant is José Luis Jofré, owner of the Ayelén store. “Fixing the water pipes is fine, but it could have been better coordinated,” he said. And he added that in his category “because of the loose soil I have lost garments that I had to end up giving away.”

Matías Riveros owns a furniture store on Diagonal Sarmiento. “Customers don’t even come to Diagonal because the streets are a disaster. We’re tired because we’ve been working on the sewers for three years and now the water will come.” He said that in his case he suffers from asthma and with the dust in the air his health is complicated, in addition to the furniture being ruined by dirt.

165 These are the millions of pesos that the province will allocate for the laying of drinking water pipes for Diagonal Sarmiento Avenue and the Felipe Cobas neighborhood.

More than 27 years after the first work of the department’s sewage network was built, it began to have serious problems that determined the urgent need to restore it to prevent sewage effluents from coming to the surface and contaminating the environment and the water network. drinking water, harming a population estimated at more than 35,700 inhabitants.

The network pipe replacement work has an extension of 53,910 meters, 6,180 household connections and works with a system of lifting pumps -due to the unevenness of the land itself-, and with a treatment plant that is located on the outskirts of the city.

Three work fronts are currently active in which pipelines are being laid, renovation of 140 manholes and 1,150 household connections in the Felipe Cobas neighborhoods, Area I and in the Sewage Treatment Plant itself, where the existing pipeline is being replaced by a 630 mm in diameter, to make the service more efficient.

Tasty and easy omelette to prepare in 10 minutes

FIFA updated its ranking and the World Cup pots were defined

“There are no more offers, everything is gone …”, the protest of a merchant that went viral

Russians take gold and silver in skiing at the Beijing Olympics