Colón and Independiente, without advantages in Santa Fe 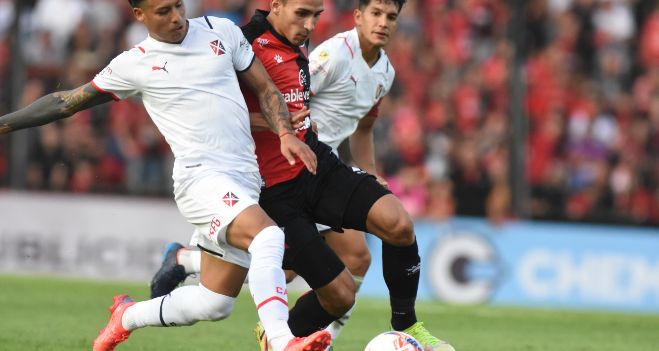 
Colón de Santa Fe and Independiente equaled 2-2, in a match on the tenth date of zone 2 of the Professional Soccer League Cup, and neither of them was able to take a good step in search of qualifying for the quarterfinals. end. Colón was left with 14 units and Independiente with 12. So far the last ticket to the quarterfinals is held by Boca, with 16 and one game less.

The match was played at the Brigadier Estanislao López stadium in Santa Fe. The “sabaleros” goals were scored by Lucas Beltrán and Luis “Pulga” Rodríguez, while Domingo Blanco and Leandro Benegas allowed “Rojo” to reach equality.

In a game that, compared to last year, had the coaches reversed, Julio César Falcioni decided to stop Colón with a line of five with Meza and Teuten coming up the wings, while Eduardo Domínguez decided to play with three central defenders and release Gastón Togni, who started as a side.

In midfield, Domínguez left Roa on the bench and bet on a double hitch made up of Blanco and Alan Soñora, but only with Batallini up. For his part, Falcioni bet on the double point with “Flea” Rodríguez and Beltrán, who was in charge of running, putting in and pressuring the visiting defenders.

The locals took advantage when Goltz cut off an advance in their area and hit Beltrán with a bowling ball, which he combined with “Flea” against a “red” defense that was very badly stopped, he reached Sosa, looked at him and “shot” him, pointing at the far post to open the scoring.

The tie came in the 29th minute when Batallini overflowed, shot a cross that hit Gárces, got up and took advantage of Domingo Blanco’s header. By then Independiente dominated the ball but the plays with the greatest risk were from Colón.

In the second half another game was seen, with more emotions in front of the goals, since both teams left their defensive rigidities. Especially Independiente, who had to go out looking for a tie when they were at a disadvantage due to a genius from Rodríguez.

At 8m Colón had a free kick from outside the area, in the left sector of his attack, which the “Flea” changed for a goal by masterfully “nailing” it at an angle with great power and precision.

Domínguez made changes and they gave him results: he was able to equalize at 20m, when at the exit of a corner Alan Soñora won the ball and enabled Laso, who overflowed like a wing and served the center to the recently entered Leandro Benegas, who anticipated in the near post and scored a scoring header.

On the next date, the eleventh, Colón will visit Huracán, on Tuesday from 7:00 p.m., and Independiente will receive Aldosivi from Mar del Plata, the same day but from 9:30 p.m. (Source: Telam)

Three tips from billionaires about the crypto world

The reasons behind tonsillitis are; What happens if left untreated?