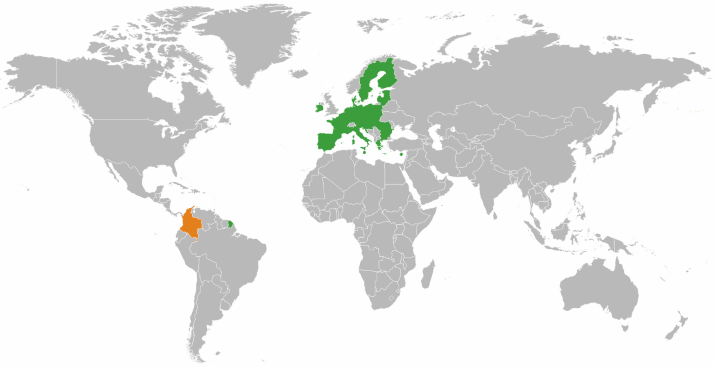 
We look only to the United States when we are alarmed by the monstrous traffic of cocaine that originates in Colombia and floods the streets of large North American cities. In Washington, they have been in charge of letting the planet know how affected their citizens are by the aggressive penetration that Colombian drug traffickers have managed to develop within their geography.

But the right thing to do is to start looking in detail at what is happening in Europe. It is that the Old Continent is increasingly contaminated by the traffic of psychoactive substances that originate in Latin American properties and affect the health of a very significant number of citizens. Today there are more than 5 million cocaine consumers in Western Europe according to Europol. The goal to be reached by traffickers is 22 million, a figure already reached in Europe for the consumption of Cannabis. In other words, the space to increase cocaine trafficking would quadruple current consumption.

There is full awareness of the way in which, as a result of the demobilization of part of the FARC in 2016, the new groups that took control of the drug business – the ELN and the Criminal Banks – not only forged important ties with the clans Mexican mafiosi but formed new international alliances, among them with criminal groups originating from the lands of the Balkans. From then on, Europe has been the scene of a pitched battle between these new drug-trafficking actors and the existing ones who had controlled criminal trafficking for decades. The fight has focused on redesigning the drug distribution routes and formulas, which has been accompanied by atrocious violence between the existing actors from Calabria and the original incumbents.

This is how the European cocaine entry map has been transforming. From the Iberian Peninsula controlled until recently by the Italians, now the large consignments enter rather through the large ports of the North Sea: Rotterdam, Antwerp and Hamburg.

Beyond the strategic transformations of narco-operations and the sophistications that have entered the scene to gain market share in Europe in order to achieve greater market coverage, what worries the authorities is the appalling link between this business scenario and a growing and sophisticated violence that afflicts the countries of entry of drugs from Colombia. A few months ago, in the port of Rotterdam, the police authorities discovered a torture room set up inside a container. Not to mention, of course, the corruption that reigns among the port authorities of enclaves such as the port of Rotterdam and Amsterdam.

The amounts of illegal substances are counted at this hour by tens of tons per shipment and the frequency of entry is also unheard of: only in the port of Antwerp last year there were more than 400 operations. And it must be said that its content is becoming more sophisticated and voluminous at every step. In May of this year, the French police seized 22 tons of sugar contaminated with cocaine in a container that left Colombia for the French port of Le Havre.

In the health field, the impact of the drugization of society is also noticeable. It has already been highlighted that throughout Europe admissions to the emergency services of clinics and hospitals have a primary origin in cocaine overdose. Countries like France have already managed to establish that cases of poisoning of this kind have multiplied by eight in recent years.

That said, it is not surprising the rivers of ink that have flowed in the press of the countries of the Old Continent after the unexpected statement by the new Colombian President at the UN, when he assured that his bishops are oriented towards decriminalizing drug trafficking. Friendships are not precisely what the new Colombian government is forging in today’s united Europe.

Barter in sight? River and San Lorenzo begin to negotiate for Augusto Batalla

The profile of Gabriel Carrizo, arrested and singled out for participating in the attack on Cristina Kirchner