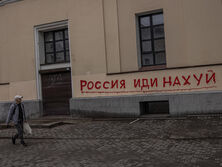 At the end of June, commissioned by the Russian presidential administration, the All-Russian Center for the Study of Public Opinion (VTsIOM) conducted a closed survey of the population about their attitude to the war against Ukraine, which in Russia is publicly called a “special operation.” This was reported on July 12, citing a number of sources, by the Russian “Jellyfish”.

The interlocutors of the publication claim that 57% support the war in Ukraine, they believe that hostilities should continue.

The opinion that the war must be stopped is shared by 30% of the respondents. The remaining 13% of respondents found it difficult to answer.

According to Meduza, older Russians have a strong support for the war against Ukraine: in the category “60 years plus” such 72%, and among citizens aged 18 to 24 years – only 19%.

The publication notes that the survey showed a higher support for hostilities in Ukraine among residents of million-plus cities (except Moscow and St. Petersburg) – 62%.

Meduza does not know how many people took part in the VTsIOM survey.

"That's what needs to be done immediately." Kirill Tymoshenko spoke about the plan for the rapid restoration of Ukraine

What are skin fungi and how are they treated

Flor de la V was furious with the attitude of Rodrigo De Paul’s ex: “Baby, why are you going if you don’t want to talk?”