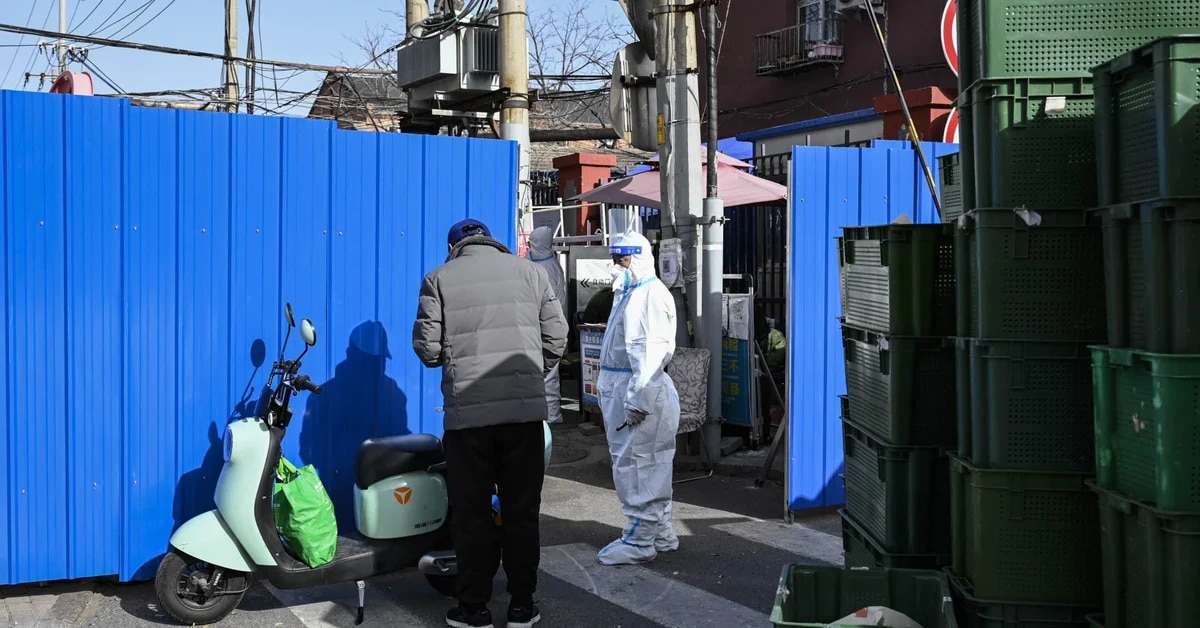 The frustration and anger of the citizens of the capital of China, Beijinghas begun to worsen in recent days due to the Extreme measures which has started to implement regime to strengthen its policy COVID zeroby enclosing with walls various locations in the city.

China continues to cling to its ‘zero COVID’ strategy, which is based on the isolation of all those infected, strict border controls, PCR tests constant and lockdowns where cases are detected and for this, now they add the construction of walls that delimit certain areas within the capital where the greatest number of cases are registered.

The authorities of Beijing They promised to speed up the reopening of some businesses so that residents can stock up, while, as happened in Shanghai last year, some delivery people are having to sleep on the streets as their buildings have been confined, trapped inside the walls built for the regime.

This week, the capital has registered more than 5,000 positive cases, while last weekend it reported three deaths after six months without covid deaths throughout the country. China.

Official Chinese figures show a total of 5,232 deaths since the beginning of the pandemica figure that may increase in the coming weeks despite the restrictions and confinements announced in some cities to try to stop the rise in cases.

The Deputy Prime Minister sun chunlanthe main executor of the ‘zero COVID’ policy, moved to chongqing (center), as it has been doing when the central government has wanted to take control of the pandemic situation in a specific region, and demanded that local officials do “everything possible” to contain the outbreak that is affecting the city .

Eight districts of Zhengzhou (downtown), a city that houses the main assembly factory for iphone of the country, in which there have been violent protests in recent days due to disputes on account of the extra payments that the owner of the plant, the Taiwanese foxconnhad promised its workers after the confinement dictated a month ago.

Restrictions are also increasing in other areas: in the province of Hunan (center) and in tourist cities such as Sanya (south) or hangzhou (east), the authorities prohibited people arriving from other parts of the country from entering most public places, regardless of whether the results of their PCR tests they are negative.

Recently, the national authorities announced a relative relaxation of their policies anti covid and they criticized practices carried out in some cities such as subjecting the population to two daily tests.

However, the increase in cases has caused some cities that had relaxed their restrictions under the new guidelines to backtrack to re-announce mass lockdowns or tests.

six million inhabitants of Zhengzhouknown as “iPhone city”have been confined since this Friday, after a few clashes between the police and the workers of that plantwho demand salary improvements.

The authorities ordered that residents of eight districts of Zhengzhouin the province of Henan (center), do not leave the area for five days and erected fences around residential buildings considered “high risk”, and checkpoints to restrict movement.

In the city, no more than a handful of cases of coronavirus.

The order came after hundreds of employees at the iPhone factory in foxconn, on the outskirts of the city, will protest to demand better salary conditions. This Friday, new images of those marches were released.

(With information from EFE)

For the second consecutive day, China registered an increase in COVID infections and exceeded 3,000 cases with symptoms

China redoubles the persecution of the pro-democratic Cardinal Joseph Zen in Hong Kong: he was found guilty of an economic crime

Does it move screen? Carmen Barbieri defines her work future

More pressure from hard Kirchnerism: Máximo Kirchner will reappear today in an act

Salem to Potapu: I am disappointed. You can come and be with people. They need help more than anywhere else in Spain