Can you learn a foreign language while sleeping?

Learning while sleeping is a recurring theme in fiction: it is found as an educational method in The best of worlds of Aldous Huxley or as a means of learning a foreign language in the cartoon dexter. The idea that we can learn while sleeping is fascinating, but whether this is fantasy or reality has long remained a mystery. Thanks to neuroimaging, we know that the brain is far from inactive during sleep and continues to respond to information from the outside world. To the point of being able to memorize them and remember them when you wake up?

In fact, we have known for about ten years that the brain is indeed capable of learning new information while sleeping. This was first demonstrated for associations between sounds or smells. For example, people wanting to quit smoking reduced their consumption by 35% by presenting tobacco odors with unpleasant smells of rotten fish while they sleep.

We then sought to understand whether the dormant brain could carry out more complex learning, such as that of a foreign language. With Sid Kouider at PSL-ENS and in collaboration with Maxime Elbaz and Damien Léger from APHP/Hôtel-Dieu, we designed a protocol for learn the meaning of Japanese words while sleeping.

Japanese is a language with a relatively simple structure, composed mainly of a sequence of consonants and vowels, for example the word neko meaning cat. Unlike other Asian languages, it is relatively devoid of accents and has a sound register similar to French. Nevertheless, the meaning of the words is very far from French.

This combination of sounds that are easily identifiable by our ears but a priori devoid of meaning for us makes it an ideal learning language for this experience.

We therefore recruited twenty-two healthy young adults who had no knowledge of Japanese or near Asian languages. We first presented them with pairs of sounds and images when awake, like here in the illustration a dog with the sound of a bark. Once asleep, we played Japanese sounds and translations together, for example the word inu (dog) with the sound of barking.

Once they woke up in the morning, we asked them to choose from two images the one that corresponded to the word in Japanese: the word inu with the image of a dog and that of another word presented during sleep, here a bell. 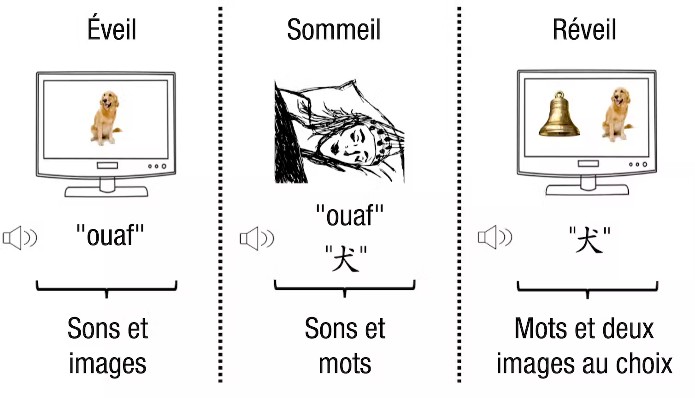 We then observed that people could identify beyond luck which picture matched the Japanese word. We also asked them if their answers were given at random or with a certain degree of confidence. Confidence was low and at the same level when the answers were correct and when they were wrong. This fact demonstrates that sleep learning is implicit, that is, people do not know what information has been learned while sleeping.

The role of slow waves

The most interesting was the discovery of what happens during sleep. Using electroencephalography, a technique that records the electrical activity of the surface layer of the brain, we were able to predict during learning which words would be remembered upon awakening. Indeed, the retained words generated more slow waves than the forgotten words. Our results, together with those of a recent publication showing that slow waves predicted the learning of the relative size of objectsconfirm their important role in sleep learning.

In summary, the sleeping brain can learn new words and associate meaning with them. This learning can be observed even in the brain rhythms of sleep, which tells us more about their function. But is this learning very useful and present for everyone? It is not yet known if it is maintained over the long term and if it depends on individual differences in memory capacities.

You are not visual or auditory, these are false beliefs about the brain

What we know in any case is that learning to sleep is much less effective than learning to wake up. We performed the same protocol when awake with 10 times fewer repetitions than during sleep. While awake, learning was found to be 5 times more efficient than while asleep, and with better confidence in learned words compared to forgotten words.

Thus, sleep learning, weak and unconscious, differs from rapid and conscious learning while awake. Although it is possible to learn while sleeping, it therefore seems more appropriate to consider wakefulness and sleep as complementary, sleep being optimal for consolidating information learned while awake.

Our research is now focusing on the role of the body, and more particularly of the heart, in the process of memorizing sleep. By studying the interactions between the body and the brain during the formation and consolidation of emotional memories, we seek to better understand how the body intervenes in sleep learning mechanisms.

This article is republished from The Conversation under Creative Commons license. Read theoriginal article.

VIDEO. Funeral of Elizabeth II: the images of the meditation of William and Harry in front of the coffin of the queen

Sebastián Battaglia: after meeting with the Football Council, the DT directed Boca’s practice

Hungary will not block Ukraine’s accession to the EU – ambassador

The controversy of the night: Fortaleza claimed a penalty from David Martínez on Renato Kayser