Bombings in the center of Kiev! Zelensky: Any peace agreement with Russia will be made by referendum! An hour-long telephone conversation with EU leaders 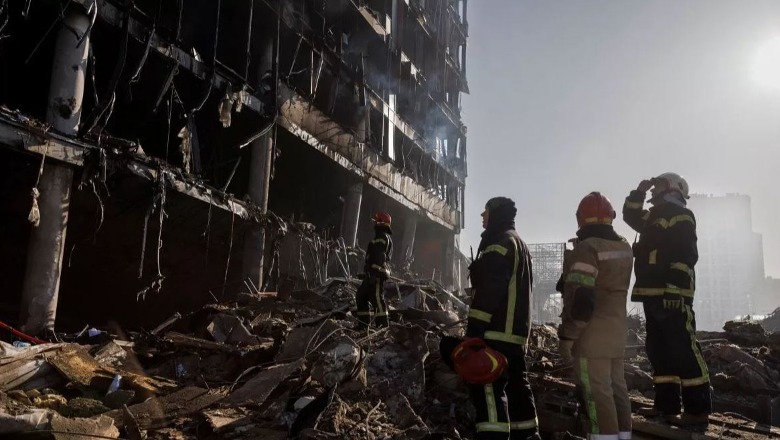 UKRAINE- Ukraine has rejected Russia’s ultimatum to give up the city of Mariupol. By 3 a.m. on March 21, Russia had given Kiev time to return an official response to what it called a ceasefire, but it was in fact a surrender of Mariupol. If Kiev said “yes” then from 07:30 to 09:30 the citizens who were in the port city would have to lay down their arms and leave the country, but their “offer” was categorically rejected. On the other hand, Ukrainian President Volodymyr Zelensky continues to insist on negotiations with Russia, saying that Jerusalem would be “the right place to find peace.”

The new round of talks is expected to take place today, but online, as has been done before. The European Union (EU) Foreign and Defense Ministers met in Brussels on Monday (March 21st) to discuss more sanctions against Russia over its unprovoked invasion of Ukraine. Poland and the Baltic states are pushing for tougher sanctions on Russia, including imports of Russian oil and gas.

US media also reported that the Russian Foreign Ministry had summoned US Ambassador John Sullivan and handed him a note of protest against Joe Biden’s comments on Russian President Vladimir Putin, which he described as ‘unacceptable’. Biden has described Putin as a “war criminal” and a “murderous dictator”.

Meanwhile, US President Joe Biden will visit Poland on March 25, following the NATO summit in Brussels and the European Council on Ukraine. This is stated in a statement from the White House. In Warsaw, Biden will have a bilateral meeting with Polish President Andrej Duda. As at 16:00 there will be a communication between him, French President Emmanuel Macron, German Chancellor Olaf Scholz, Italian Prime Minister Mario Draghi and British Prime Minister Boris Johnson.

Bare shows the "threat" for the Spanish player: We do not see him as friendly

Lung cancer cases are rising among non-smokers in the country; These are the reasons

“They have enough potatoes and cucumbers.” Grybauskaite believes that Western sanctions will not force Russians to overthrow Putin

Prime Minister: “The era of the “Security Dream” is coming to an end, the function is becoming fully state-owned”

The eldest son of the Beckhams married the daughter of billionaire Peltz. Donations were collected at the wedding in support of Ukraine