Battaglia’s joy: “Beating River is always special” Xeneize’s coach stressed that his coaches showed “a lot of personality” to win the Monumental. 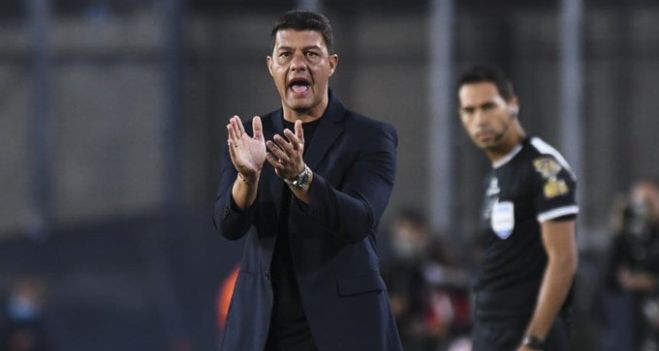 
Boca achieved a triumph in the Superclásico: they won 1-0 as a visitor, for the seventh round of the Professional League Cup. After the victory, Sebastián Battaglia highlighted the personality of the team to keep the three points in the Monumental.

“They are the kind of matches that we like to win. It is the classic rival. The previous match we had not had a good presentation. Today we are very satisfied. They are hinge matches. Let’s hope it works that way for the good of all,” he said the coach at a press conference.

In that sense, he asked the fans “to enjoy.” And he added: “It’s very nice to win the classic. Beating River is always special. In another stage I had to be inside, because you suffer less running.”
On the other hand, Battaglia stressed that against Estudiantes and River they added six points “against difficult rivals” who are “to compete” match by match in the three tournaments they will face this semester. “It’s game by game. It’s a joy for all Boca fans,” he said.

Sebastián Battaglia assured that “Boca came out to play as equals” against “a rival that has been playing well for a long time”, as a visitor. “We go out to do what we think, to fight the game in the middle of the court. It’s a difficult court but we leave with the three points,” he said.

In that sense, he acknowledged that they suffered in the first half: “The first half cost us. We had started well, then it cost us to have the ball. In the second we went out to play. It is what we asked the boys. We were able to score that goal And we won the game.” In turn, he stressed that his direction showed “a lot of personality” and that “it was a very important victory.”

The changes of Darío Benedetto and Marcos Rojo

Sebastián Battaglia surprised at halftime: he sent Luiz Vázquez to the field instead of Darío Benedetto. “Pipa began to feel bad. He even raised a fever now,” he explained. In turn, he said that he took Marcos Rojo out at the end of the match because he “has a sore back.” And he added: “He has been bringing her since last week. He began to hurt and had to leave.”

Edith Hermida said goodbye in tears: “It’s like that”

Karan Kundrra Dream House: Karan Kundrra bought his dream house in Mumbai, you will be shocked to know the price

Revocation of Mandate live: the polls were opened for the issuance of the vote

PM Modi Gujarat Visit: ‘The farmers of the country should not face any problem, taking care of it’, PM Modi said in Gujarat