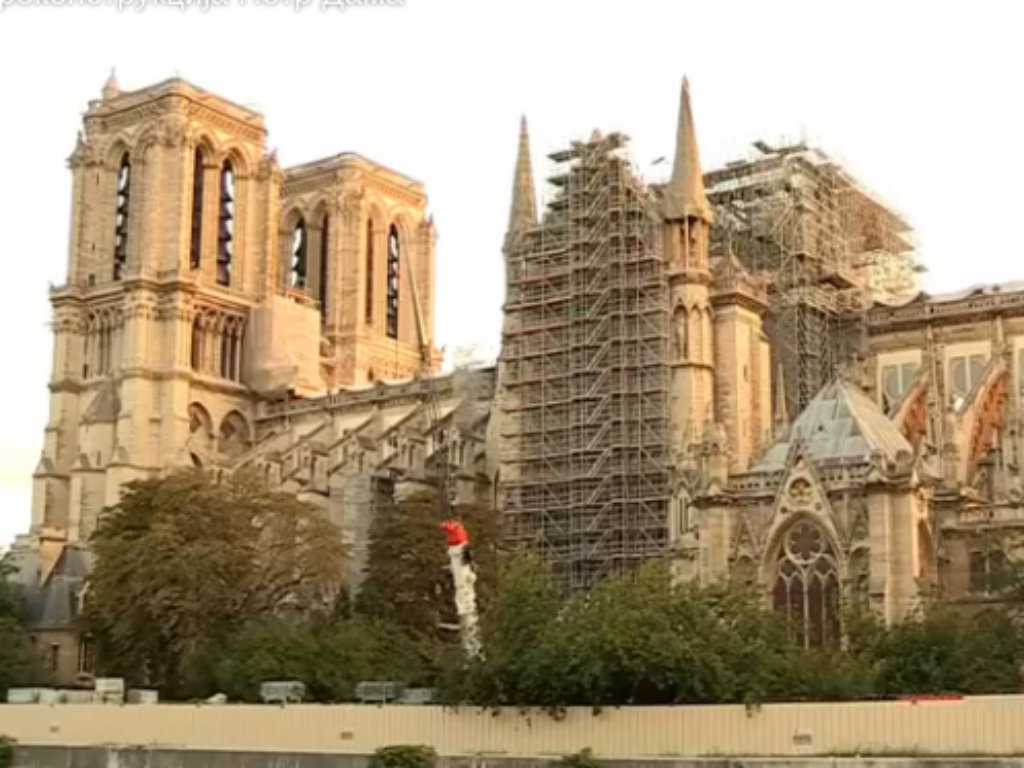 (Photo: YouTube / screenshot)
Several tombs and a sarcophagus from the 14th century were excavated during the works on the renovation of the Notre Dame Cathedral after the devastating fire in 2019.
Archaeologists made the discovery while repairs were being made to the central tower, the French Ministry of Culture announced on Monday.
Among the finds was a “completely preserved sarcophagus made of lead”, which was considered to be a high dignitary from the 14th century.
Archaeologists have also found pieces of painted sculptures under the cathedral floor, identified as parts of the original 13th-century roof screen – an architectural work that separates the altar space from the nave. god).
The team also carefully dug out a pair of carved hands.
The bust of the bearded man and some sculpted vegetables were also removed, with still visible traces of paint.
Archaeologists have already used a mini endoscopic camera to peek inside the sarcophagus, which looked distorted by the weight of earth and stones.
– You can see pieces of cloth, hair and, above all, a pillow made of leaves on your head, a well-known phenomenon when religious leaders were buried. The fact that these plant elements are still inside means that the body is in a very good state of preservation – said Christoph Benie, a leading archaeologist.
The discovery came as reconstruction teams intended to set up huge scaffolding to rebuild the tower, before which they needed to check soil stability.
In the process, they discovered a 19th-century underground heating system, with a sarcophagus lying between brick pipes.
Despite the excitement over the discovery, archaeologists are “ticking the clock.”
They have been given until March 25 to complete the work before the reconstruction project continues, in order to adhere to the planned reopening of the Cathedral in 2024.
Let us remind you, a big fire engulfed the Notre Dame Cathedral in Paris on April 15, 2019. Then the tower collapsed and a large part of the roof was destroyed, but the firefighters still managed to save the grandiose medieval building.
However, the road to renewal is long and difficult and it is expected that its old glory will be restored only in April 2024, five years after the fire, reports Telegraph.

318 quotas open for specializations in Medicine: We are meeting the needs in the country