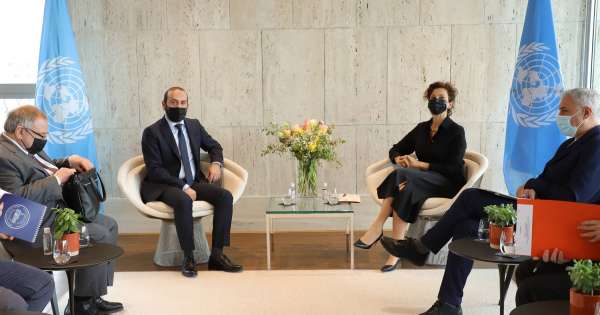 On March 16, RA Foreign Minister Ararat Mirzoyan, who is on a working visit to Paris, met with UNESCO Director-General Audrey Azoulay.

Minister Mirzoyan stressed that Armenia is expanding cooperation with UNESCO in the fields of education, science and communication. He noted that Armenia, as a member of the Executive Board of UNESCO, continues to be committed to the promotion of world peace, development and effective multilateralism, which are the pillars of the Organization.

During the meeting, they referred to the deliberate destruction of the Armenian historical, cultural and religious heritage in the territories under the control of Azerbaijan as a result of the Azerbaijani aggression against Nagorno Karabakh, as well as the distortion of identity. In this context, Minister Mirzoyan drew the attention of the Director-General of UNESCO to the establishment of a state working group for this purpose in Azerbaijan. It was also emphasized that these actions openly go against the 2021 agreement on the protection of the Armenian historical, cultural and religious heritage. The decision of the UN International Court of Justice on December 7, 2006 on the application of urgent measures.

The RA Foreign Minister stressed the urgent intervention of UNESCO in the current situation, the unimpeded involvement in the conflict zone in order to prevent the preservation and vandalism of the historical and cultural monuments of Artsakh, which are part of the universal cultural heritage. It was emphasized “On the protection of cultural values ​​in case of armed conflict” of 1954. In line with the Hague Convention and the two Protocols thereto, the priority implementation of the fact-finding mission to the Nagorno-Karabakh conflict zone proposed by UNESCO Secretary-General Audrey Azoulay.

‘Pakistan replaced lies and deception’; How angry is the US?

Real Madrid wins against Celta 2-1 and approaches the title

Internal crack: the moments that Cristina Kirchner starred in the act for the Malvinas Islands