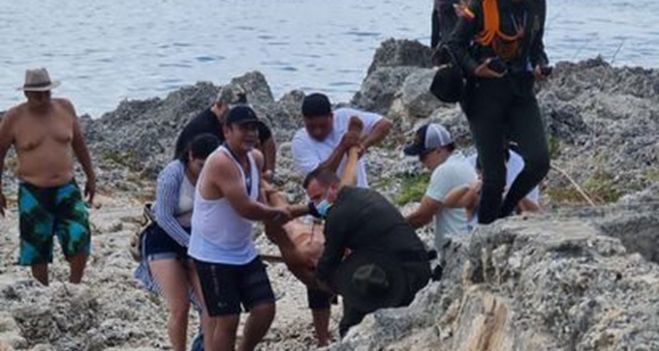 
An Italian tourist died on Friday after being attacked by a shark on the island of San Andrés, in Colombia.

The animal appeared while the man was in the sea and bit his leg. He died in hospital from blood loss.

According to local media reports, the man was surrounded by several of these animals when he bathed in a rocky area of ​​cliffs known as “La Piscinita”. At that moment, one bit his right leg at the thigh, causing a fatal injury.

Although he managed to escape at first and arrived at the hospital with vital signs, he eventually died from the large amount of blood lost.

Sharks prowl in the sector where the tourist was attacked, to the south west of the island of San Andrés.#Shark #SanAndres pic.twitter.com/OWbMBSITvo

“The sharks did not give him a chance to swim, he tried to scare them away with his hand, but every time he did this they bit him,” a witness told the local TeleIslas channel, although without clarifying the number of animals in the water.

Already seriously injured, the 56-year-old man, identified as Roseto Degli Abruzzi, was helped by several people to get out of the sea. They immediately transferred him to the Departmental Hospital of San Andrés, where he arrived unconscious. Doctors were unable to revive him.

“Apparently he had a loss of blood volume in the area where he had the accident,” Erika Palacios, Scientific Deputy Manager of the health center, told Caracol Radio.

In this context, images circulated on social networks in which two tiger sharks can be seen in shallow waters south of San Andrés, near the beach where the tourist was swimming.

A spokesman for the Government of San Andrés assures that these types of attacks are not frequent. The area has its crystal clear waters as one of its main attractions for tourists.

“These are two large tiger sharks (Galeocerdo cuvier), whose identification was confirmed by experts at the national level. This is one of the species with a wide distribution in the countries of the Greater Caribbean that usually stays in deep waters during the day and feeds in shallow waters at night”, explained the local authorities in a statement after the tragic accident.

“There are reports of this species throughout the archipelago. However, it is rare to see them during the day,” they added. Due to what happened, however, tourists were recommended not to enter the sea during these days.

95% of Uruguayans are vaccinated

The assertion of the new Chinese superpower