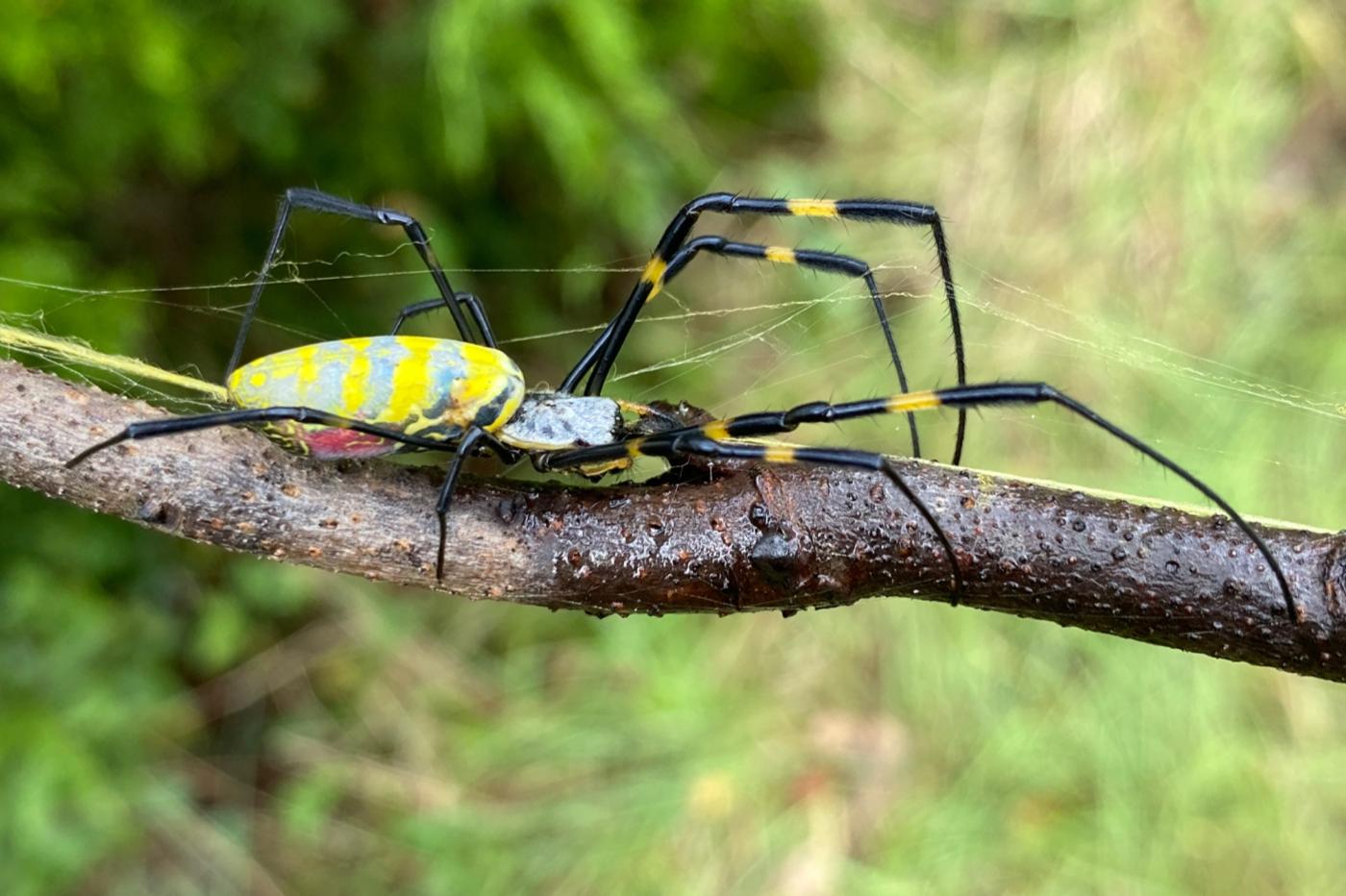 Individuals of this species, called Trichonephila clavata, are quite impressive visually. In addition to the bright colors they display, adults can have a wingspan close to 10cm. It is approximately the size of the giant tegenaire, the largest spider identified on French territory. It remains much smaller than some other species, such as Heteropoda maximawhose wingspan can reach 30cm, but it is still a beautiful piece.

An intruder who feels at home

Originally, these spectacular spiders come directly from Asia; they are found in particular in Japan, Korea and Taiwan, as well as in some regions of China. In 2013, they inadvertently landed in the United States, presumably on board a commercial container.

And this species has apparently felt at home in Georgia, a state known primarily for its orchards; in a few years, it colonized the area at an impressive speed; so much so that an entomologist even compared its courtyard to the lair of Shelob, the terrible spider from The Lord of the Rings!

Fortunately, this species is not aggressive by nature; moreover, its bite, although painful, is only dangerous if there is an allergic context. The proliferation of the Joro spider is therefore absolutely not a public health problem. On the other hand, the speed at which it settled still intrigued the researchers.

A rapid colonization that raises many questions

Indeed, it is common knowledge that invasive species tend to destabilize the ecosystems they colonize. The best example remains that of the Asian hornet which makes life difficult for our bees. However, this disruption can be all the more important when the species proliferate as quickly as Trichonephila clavata.

When the phenomenon took on impressive proportions in Georgia last fall, researchers took a closer look at the impact of this motley spider on the fauna and flora. After several months of sustained work, the University of Georgia has just published its analysis of the situation.

In a press release, it summarizes the conclusions of this work. The first of them confirms the hypothesis which already seemed to take shape in November; this invasive species is now at home, there is “little more to do to stop them”. So we will have to learn to live with it. Fortunately, this is not necessarily bad news.

No impact on the Georgian ecosystem…

Indeed, according to Andy Davis, one of the entomologists behind the study, it would have integrated remarkably well into its new ecosystem; they would have absolutely not altered the delicate balance which reigns there, in particular at the level of the food chain. On the contrary, they could even serve as a new source of food for neighboring species of birds and devour bedbugs and pests near dwellings.

In a second part of the study, the researchers looked at the future prospects of this species. During preliminary work last October, they had already suggested that it could colonize a much wider area; a possibility that still remained to be verified.

To achieve this, the researchers based themselves on a crucial point for all species in the area: resistance to cold. Indeed, on the east coast of the United States, winters can be quite harsh compared to the mild climate that prevails in Georgia. Only species sufficiently equipped to withstand this cold have a chance of settling there permanently.

The researchers therefore subjected a few Joro spiders to a chilly temperature, while measuring several physiological parameters. They realized that the metabolic activity of Trichonephila clavata remained relatively high under these conditions. Moreover, it was even shown to be able to withstand a brief freezing which would have killed the majority of the other local species.

…but an expected proliferation along the entire east coast

According to the researchers, this means that the spider could feel at home far beyond the pleasant climate of Georgia; it could probably colonize almost the entire east coast of the country. She has already achieved this on her native island of Japan, where certain aspects of the climate are very similar to those found in the eastern United States.

And if Trichonephila clavata are indeed in the mood to travel, they should have no trouble doing so, thanks in large part to humans. “The chances of these spiders spreading through population movements are very high”, explains Benjamin Frick, one of the authors of the study. “For the record, just before the publication of this study, we learned that a student had transported one to Oklahoma inadvertently !” he says.

And in the worst case, this species does not need humans since it already has an exceptional mode of colonization, among the most effective of all species. Indeed, they use their webs, exceptionally dense and light, to rise with the wind and travel great distances like a paraglider.

A behavior that can give rise to real “rains” of baby spiders when the wind drops in the spring… Fortunately, they do not represent a threat for the population of Georgia, but also for the rest of the east coast which will soon have to get used to its presence.

Copa Libertadores 2022: the list of Boca concentrates for the debut against Deportivo Cali

Sinner comes back and submits the runner-up

What is happening in Tirana? Fierce clashes with police, hooligans beat citizens (VIDEO)

USA: Russia plans to annex much of eastern Ukraine #2May