Alberto: “I must be weak, but I am the one who faced the debt with the IMF and the pandemic” 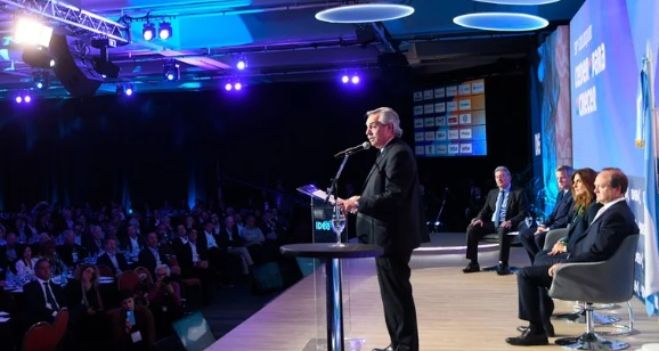 
President Alberto Fernández closed the IDEA Colloquium and, in line with the motto of the meeting (“give in to grow”), called for setting aside political intolerance and looking at the “glass half full” of the economic situation.

During his presentation, the president showed graphs with some macroeconomic variables such as the growth of activity, the creation of industrial employment and the investment rate, to ask businessmen to “look at the glass half full.” “All curves go up, why think that the glass is half empty?” he asked himself.

However, Alberto Fernández recognized that inflation is a problem that “we have to solve” but “it is gradually descending”.

“Inflation is not a problem that was generated with us, I assumed in 2019 with 54%,” he insisted. Likewise, he clarified that only by controlling the rise in prices can “a better distribution of income” be guaranteed. “By controlling inflation we will be able to guarantee that wages are not diluted, a society with better incomes for those who work,” she said.

At the end of his speech, Alberto Fernández seemed to allude to his critics, both from the opposition and from official sectors. “Many times they tell me: ‘You are weak,’” he stated.

And he sentenced: “But I don’t want the arrogance of the proud or the courage of the mercenaries.”

In another section of his speech, the President also criticized -without naming him- the government of Mauricio Macri, while questioning that businessmen do not value the institutional quality of his government.

In this regard, he asked: “Why don’t they take all this into account? That there are no more spies, there are no more judicial operators, no more pressure.” Fernández was in charge of closing the largest business event in the country, and arrived in Mar del Plata accompanied by the Argentine ambassador to Brazil, Daniel Scioli.

Argentina drags border Uruguayans into its own crisis

Scioli supported Fernández: “The President listens, but he is the one who decides”