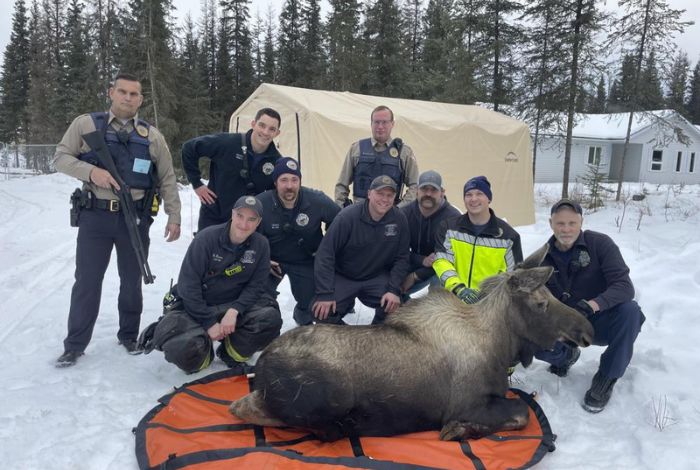 Alaska firefighters received an unusual request for assistance last weekend from Alaska Wildlife Troopersbut it was not the mundane situation of a cat trapped in a tree.

“They were looking for help getting a moose out of a basement,” said Capt. Josh Thompson of Central Emergency Services on the Kenai Peninsula.

The moose, estimated to be a 1-year-old bull, made a misstep while eating breakfast Sunday morning at a home in Soldotna, about 150 miles (240 kilometers) southwest of Anchorage.

“It looks like the moose had been trying to eat some vegetation by the basement window well and fell in, and then fell through the glass into the basement.”Thompson said.

That’s where he was stuck, one floor below ground.

A biologist with the Alaska Department of Fish and Game was able to calm the moose, but the animal was not completely unconscious.

“He kept looking around and sitting there, he just wasn’t running.” Thompson said.

Once sedated, the next problem was getting the moose, which weighed at least 500 pounds (225 kilograms), out of the house.

Improvising a bit, the rescuers grabbed a large transport tarp that is normally used as a stretcher for larger human patients. Once the moose was in position, it took six men to carry it through the house and back outside.

Photos from the morning’s rescue show the moose unfazed, just staring ahead between the two men maneuvering the front of the tarp down a hallway, watching where they’re going.

Thompson said the moose stayed for a while after leaving until a reversal agent on the tranquilizer kicked in. The biologist also treated minor lacerations to the back of the moose’s legs from falling out of the window, the Anchorage Daily News reported.

Once the sedative wore off, the moose apparently had had enough of human company and wanted to return to the wild.

“He got up and go away”Thompson said.

“To me”: Florencia de la V’s response when asked about a possible communication with Jorge Rial

Two deaths from COVID in Albania, 1207 citizens infected within 24 hours

Will Smith breaks his silence on the slap that went around the world, the message for Chris Rock

MAJA’S FRIENDS’ SHOCKING CLAIMS Because of this, they broke up with Pec and Marinković, and his business partners and criminals were involved in everything?