After a three-year pandemic break, the Devín – Bratislava national run will come to life again, on October 9 it will be run again in a classic way 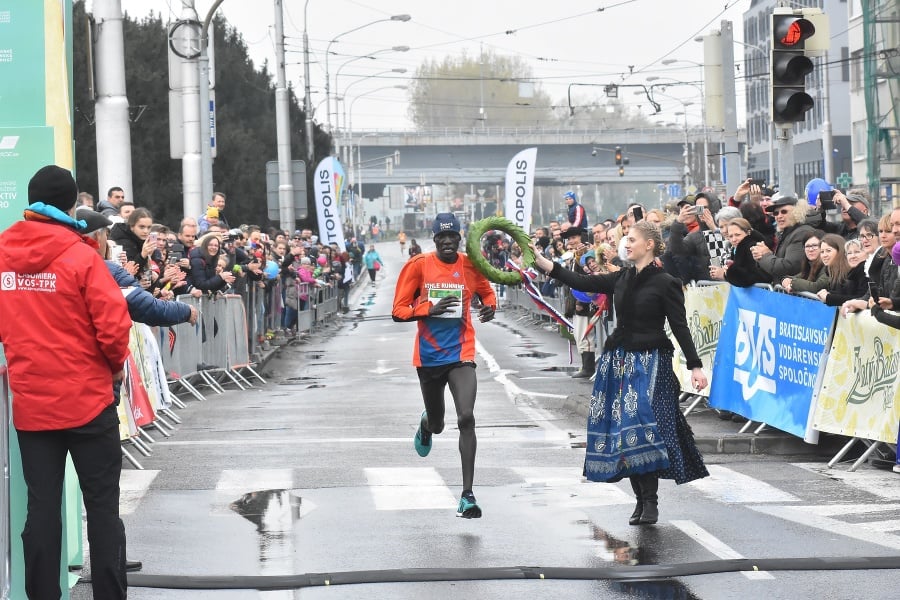 
The last time a mass of performance and hobby athletes ran from the Devín hill to the center of Bratislava (11.625 km) was on April 14, 2019, when the Kenyans Matthew Kosgei and Caroline Korirová were happy about the victory. A year later, however, the coronavirus pandemic caused that one of the jewels of Slovak sport did not take place in the traditional April, but also in the alternate October and December dates (at least for 100 participants).

Open the gallery
So far, the last winner of the classic “Devín” format in 2019 is Matthew Kosgei from Kenya.
Source: JÁN LUKY

Last year, the classic Devín-Bratislava National Run was again absent due to the covid pandemic, it took place only symbolically: on November 28, it was officially run by four runners representing organizers from STaRZ, SAZ, SOŠV and Be Cool. For a long time, however, it seemed that the popular “Devín” in the year of his 100th birthday will continue his famous and turbulent history with a classic race in the fall. It was expected to be a record and even more than 6020 runners will take part in the record year of 2018.

However, the pandemic reigned again, the date of the event was constantly shifted, and in the end, apart from the mentioned symbolic run of the four Lucia Pelikánová, Alexandra Longová, Július Lanátor, Jozef Krúpa, the running was only virtual – each individually in different places in Slovakia and abroad. 956 runners completed this version. The best among men was Matej Schieber from Dukla, Banská Bystrica, with a time of 39:36 min. Among the women, the best performance was achieved by Katarína Lovrantová (AK ZVP Lučatín/Salomon Slovakia), who ran the specified 11.5 km in 44:52 min.

The entire entry fee collected from the 73rd edition of the TIPOS National Run Devín – Bratislava from 2,496 runners in the amount of 29,310 euros went to healthcare workers in hospitals helping patients struggling with COVID-19.

The organizers of the 74th edition have already started registration for the main run from Devín to Bratislava (it is part of the SAZ 2022 Running Cup) and also at the so-called little Devín for youth and recreational runners with a start under the Lanfranconi bridge on an approximately 2.6 km long track.

The most advantageous starting fee (15 euros, for small Devín 9 euros) is when registering before 9/30. The novelty is the start in waves of 1000 runners according to performance, so it is necessary for runners to state their best time for 10 km when registering. In the first three days since the start of registration, more than 400 runners registered for the 74th TIPOS National Run Devín – Bratislava. 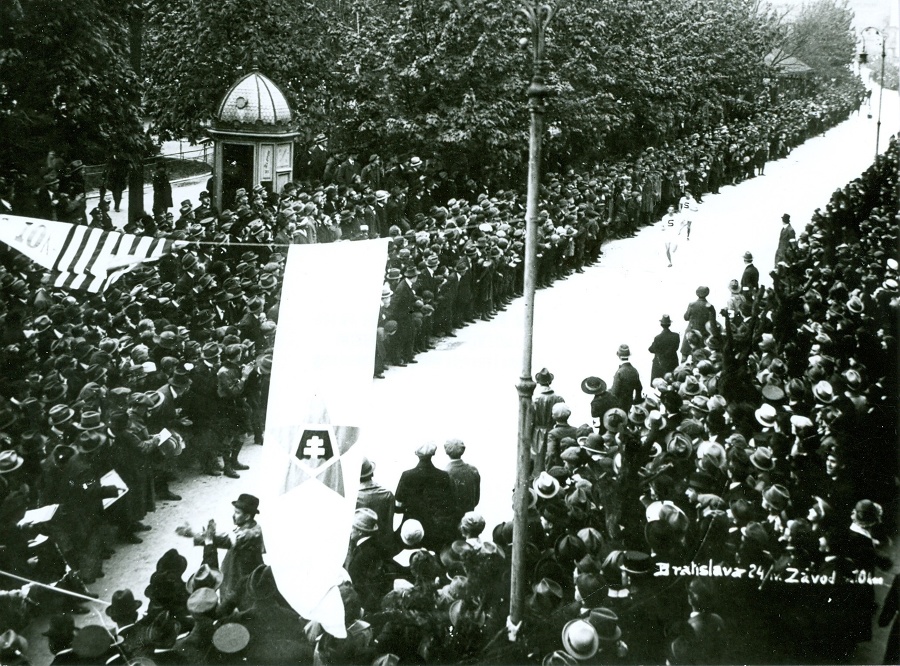 Open the gallery
Finish at Hviezdoslav Square in Bratislava in the 1st year on April 24, 1921.
Source: PHOTO ARCHIVE SOŠM

Curiosities from the history of the Devín – Bratislava National Run

1921: In the premiere, 37 runners started from Devín and 21 of them reached the finish line in front of the SND building – the first was Václav Vohralík from Sparta Prague, fourth at the 1920 Olympics in the 1500 m.

1925: For the first time, a Slovak runner won, of course, in the jersey of Sparta Prague – Košick native Jozef Koščák. Despite the fact that he accidentally got off the train in Devínská Nová Ves and had to go to Devín

tread on foot. František Hulán (I. ČsŠK), a native of Cabaj-Čáporský, who finished third the year before when he was not even 19 years old, and who started running even when he was 74 years old (1979) caught up right behind him!

1932: Koščák won again in the Brno World Cup jersey – the new cup, which was donated by the rector of the UK Dobroslav Orel, was declared eternally traveling and the winners are decorated with it to this day. Volume no. 11 was the first Slovakian road running championship: the title was won by the third Ján Stiteczký (PTE Bratislava).

1935: The first winner from the Bratislava club: František Šolti (PTE).

1948: After a ten-year hiatus, the run was resumed – thanks mainly to Rudolf Holzer. The first three post-war editions were won by František Augustín, but even they did not take place “in one piece”, in In 1950, the race was not allowed, and the 20th year was held only thanks to the inclusion in the program of the Army Day celebrations and – on a shortened track.

1952 – 1966: In the 1950s, Devín was part of the border area and the current regime did not allow events there, in the 1960s Slovan, as a successor club after the 1st ČsŠK, did not have the organizational potential to continue the tradition.

1967: TJ Rapid Bratislava resurrected the event at Holzer’s initiative, four foreigners also started for the first time and one of them won in the pouring rain – Swiss Walter Dietiker.

1982: The first wave of popularity of recreational running – the number of participants exceeded one thousand (1211).

1990: As a result of November 1989, the barbed wire disappeared on the Slovanská cesta in Devín and the border guards did not follow, but gave a concert to the runners…

1992: In another crisis situation, the race was taken under the wing of the Administration of Physical Education and Recreational Facilities of the Slovak capital, and Peter Blaho became the soul of the event as the main coordinator for 25 years.

1994: The first primacy of Miroslav Vanka from Dukla, Banská Bystrica, who, after 14 (!) years, reached the sixth place, which is still unsurpassed by men.

2001: Alena Močáriová completed a unique series: she won for the seventh time.

Vedat Bilgin, Minister of Labor and Social Security, was in Aydın; The expected explanations came one after the other: EYT, minimum wage hike, high inflation…

About 30 dogs died in the US from a mysterious illness