AFL lawyers: The autonomy of NGOs is being questioned 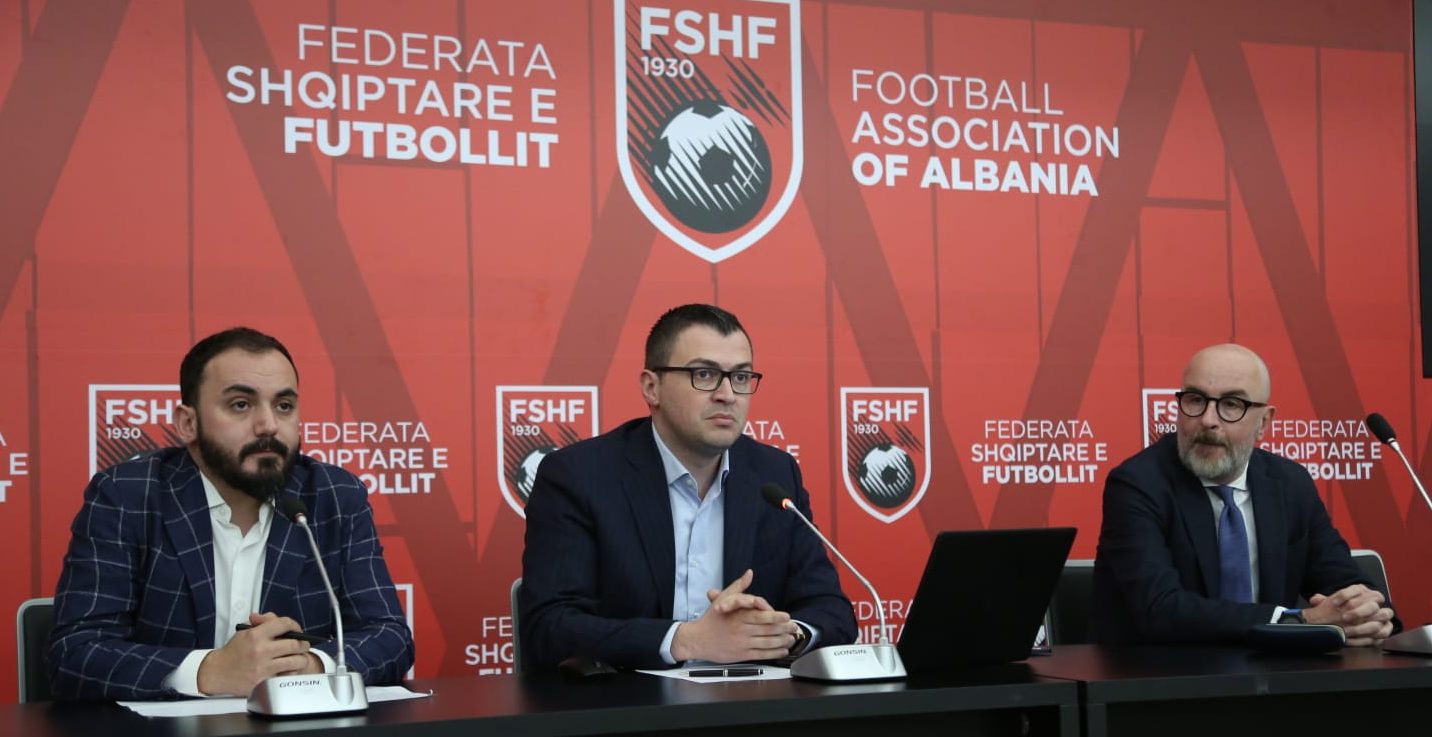 
The Albanian Football Federation has reacted today regarding the situation created in Albanian football and the AFF after several decisions taken by the Court of Tirana, where the President of the AFF, Armand Duka, the General Secretary, Ilir Shulku and the Secretary of the Tirana AFR, Ardian Haçi are under the security measure “Temporary ban on exercising certain professional or business activities”.

Through a press conference, EC member, Av. Envi Hicka, Director of the Legal and Licensing Department, Aldi Topçiu and Director of Communications at the AFF, Andi Verçani presented to the media the reasons why the recent decision taken by the Court of Tirana is not only illogical but also illegal.

Topçiu listed in his reasoning all the facts as to why the charge of abuse of office cannot be applied to a chairman of a non-profit organization. “In the context of recent legal or illegal developments regarding the Albanian Football Federation, I want to try to explain the consequences of camouflaged decisions as court decisions.

Now that the criminal process against the FSHF leaders is a political process, this is a little but certain. The plot materialized on 25.01.2022, when a criminal report was filed with the Prosecutor’s Office of the Tirana Judicial District, made by the Mayor, Erion Veliaj, against Ilir Shulku and Ardian Haçi.

The prosecutor of the case, Mr. Arben Agovi, has further expanded the investigation to the President of the ALF, Armand Duka and the Chairman of the Verification Commission, Koço Kokoëdhima, the latter suspected of “Abuse of Duty” and asking for all these persons the measure of insurance “Temporary ban on exercising certain professional or business activities”.

With diligence, the request was accepted for Sunday by Judge Artan Gjermeni and further left in force by Mr. Gent Shala. I will try to explain to you why this decision is not only illogical but also illegal. 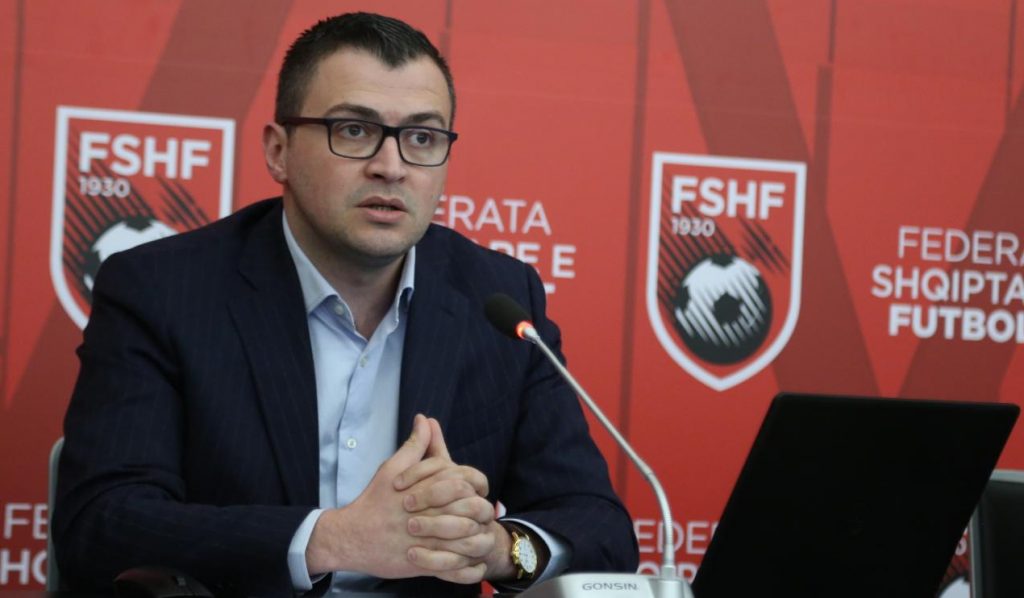 First: The criminal offense for which Armand Duka is charged is abuse of office. To understand the illogicality of this charge, we must first explain that this offense can only be attributed to persons exercising public functions. That is, officials elected or appointed by public administration bodies.

Not only is the President of the ALF not a public office, but this concept is essentially prohibited by the law on NGOs, which sanctions the principle of independence from the State. Not having such a public function is illegal and meaningless to impose a personal security measure.

Moreover, since a similar situation was created in the years 2006-2008, where the president of the ALF again had a criminal report for Abuse of office and the same prosecution body, the Tirana prosecutor’s office has issued a decision not to initiate proceedings as the president is not subject to this offense.

This, of course, creates a great deal of legal uncertainty for sports organizations, the consequences of which can be extremely serious.

Secondly: Even if we fall to the level of the Court and accept that the President of the ALF or any other Federation is a public function for us, we must take into analysis what are the duties that have been abused ?!

According to the statute, the President of the ALF is responsible for convening meetings of the General Assembly and the Executive Committee, implementing the decisions adopted by them, overseeing the work of the General Secretariat and maintaining relations between the ALF and its members, FIFA. , UEFA, and other organizations.

Moreover, the absurdity deepens if you think that for these falsified elections, the Court of Tirana itself has decided to annul them, annulling any decision that was taken at the meeting at 15.00. This means that in doing so, the Court has automatically canceled any attempt for “Falsification” in the Tirana Association.

Third: Armand Duka and Ilir Shulku have been suspended from duty of the President of the ALF and Giykata himself has expressed despite this suspension, they are allowed to perform administrative actions to make payments in favor of natural or legal persons (salaries, settlement of contracts and others of this nature).

This is especially due to the fact that the Court itself is not clear about the nature of the role of the President of the ALF or the Secretary General, but had the sole purpose of obstructing the electoral process in the ALF. To summarize: despite disagreement with these decisions and appeal that will be exercised against them, these politically postponed decisions, are in themselves without consequences on the legal life of the ALF. Therefore, I want to assure all members not to worry and to continue the game “, – Topçiu underlined. 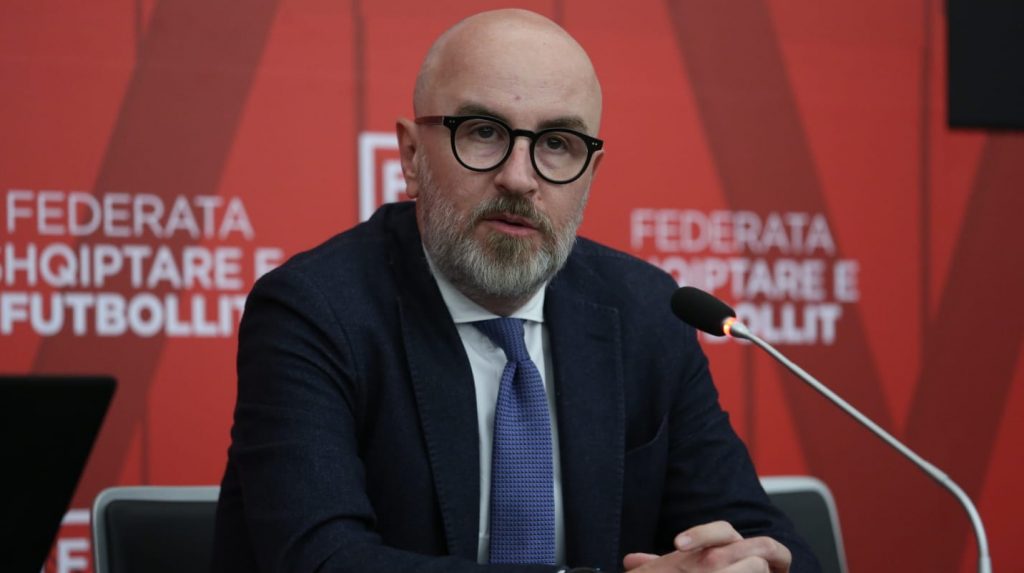 Meanwhile, the member of the Executive Committee, Envi Hicka, focused in particular on the fact of illegality of these accusations that have been raised against the top leaders of the highest football institution in the country. “What should shock the public opinion is the fact that the legal order in Albania must be built and function in such a way as to respect what is called freedom of organization.

To create institutions of private law, such as the ALF, the Order of Journalists, the Albanian Olympic Committee, the Order of the Doctor, etc. So people need to be able to self-organize. If in the exercise of the constitutional right to organize, the citizens are hindered by these means, which in fact belong to the officials, they work on behalf of the Republic of Albania, then the autonomy of the organizations in the Republic of Albania is questioned, of every organization, not just the ALF.

Beyond the connection of these two problems is exactly the status in this case of the President of the ALF, which in legal language means: Can this person be subject to the criminal offense of abuse of office or not? NO! The subject of the criminal offense of abuse of office can not be a person who performs a certain duty in a non-profit organization.

Can not be the subject of this offense. This is the fundamental error of all these procedures. If this mistake continues, it means that the Albanian legal order does not guarantee the proper functioning of non-governmental organizations. Duties are not defined by the legal order of the Republic of Albania. “If all this situation where we are today, there is a danger or a concern for the proper functioning of football in the future at the national or international level, this is related to this specific criterion,” said Hicka.

THE TRIAL BEGINS: A woman has appeared who claims to be the mother of Beckham’s child

Zelensky: Mariupol is the heart of the war, allowing us to hold our positions in the east of the state

How much is a pizza worth? Price dispersion exceeds 200%

Wanchope Ábila was asked if he would shout a goal at Boca and said: “I have many codes”

RTV still without general director: Trade unions have filed criminal charges against the Board