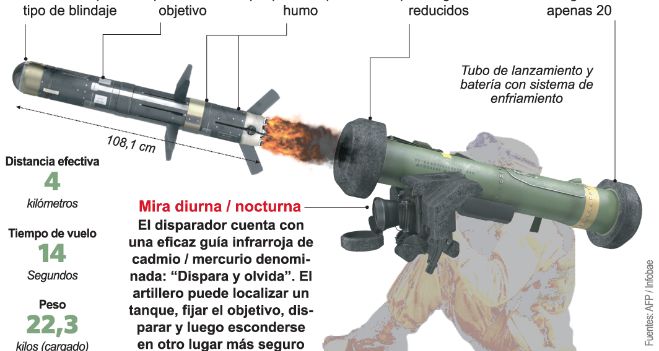 
Russia’s war in Ukraine escalated yesterday when Moscow intensified its attacks using, for the first time, a hypersonic missile in a war, which means greater power of destruction and death. Until now, the weapon that had been most talked about in this war was the Javelin anti-tank missile launcher, made by the United States, with which Ukraine has managed to delay the Russian advance on kyiv, the capital (see infographic).

Now, with the advent of hypersonic “Kinjal” missiles, it can accelerate the destruction of key strategic points for the defense of Ukraine, which is facing this unwanted war with a great disadvantage in terms of modest weapons capacity compared to the incalculable might of Moscow.

On the 23rd day since Russia began the invasion of kyiv, the Russian Defense Ministry claimed that on March 18 it had used “Kinjal” hypersonic missiles to destroy an underground warehouse of missiles and ammunition of the Ukrainian aviation in the town of Deliatin, in Western Ukraine, something unprecedented.

This type of missile, very manageable, defies all anti-aircraft defense systems, according to the Kremlin. Until now, Russia had never previously reported the use of this ballistic missile in either of the two conflicts where it is a belligerent party, Ukraine and Syria.

The peculiar name of the missile “Kinjal” is a word of Russian origin that means “dagger”. They can travel at more than five times the speed of sound. And the statistics are impressive: the Kinjal can hit a target at a distance of up to 2 thousand km and can fly at over 6 thousand km/h.

On the Ukrainian side, the key to resistance lies in the use of low-cost portable missiles and drones. Its use has been key for an army with few resources like the Ukrainian one to stand up to the powerful Russian armed forces.

The American “Javelin” and the British-Swedish NLAW anti-tank guns, which weigh between 10 and 25 kilos can be carried on the shoulder and are capable of penetrating the most modern armor, have emerged as one of the decisive weapons in the war from Ukraine.

The “Stinger” anti-aircraft, also American, a device that can also carry a single soldier, give the Ukrainians the ability to shoot down planes and helicopters at a range of about 8 km and are another of the strong points of the kyiv arsenal, in much of it donated or sold by the West.

Ukraine’s defensive capacity is completed by Turkish “Bayraktar” drones, precision devices capable of monitoring from the air for more than 24 hours at a time and attacking individual armored vehicles. At a price of less than a million dollars per unit, compared to the 30 million dollars that an American “Predator” can cost, the Bayraktar, devices with a wingspan of about 12 meters, promise to give a boost to the Turkish industry.

Tension over the invasion of Ukraine

The official dollar closed a weekly increase of 44 cents

“It is too early to talk about returning that property, there must be a process in the United States” ․ Deputy Prosecutor

Russia banned entry to 963 US citizens, including the President

Intermittent fasting, contraindications and side effects