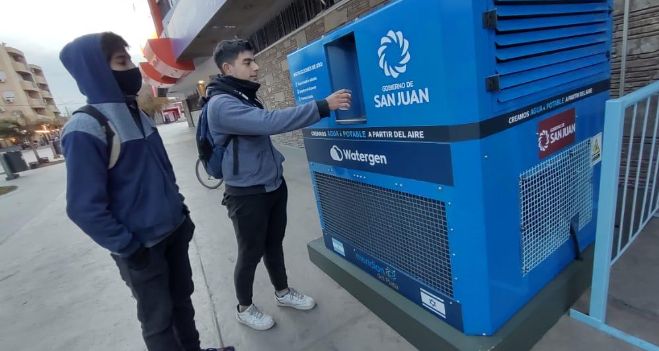 
As part of the agenda that the Israeli ambassador, Galit Ronen, developed yesterday in the province, together with Governor Sergio Uñac, they left the first machine to generate drinking water in the province from the humidity of the air in operation. The system was created by the Israeli company Watergen, a world leader in the market for atmospheric devices for drinking water from air.

It will now be in use 24 hours a day at the Aldo Cantoni Stadium, selected for the large number of people who do physical activity in the area. And the intention, according to the Minister of Public Works, Julio Ortiz Andino, is to evaluate the operation of the system with the possibility of acquiring more of these devices to meet specific needs where there are difficulties in obtaining water, for example remote locations, or cases of catastrophes, such as an earthquake.

The system, which produces 900 liters per day, is only to meet the needs of human consumption because the cost is high, around US$ 130,000, and for that reason it cannot be used for other uses, such as irrigation of the agro.

In this way, the device was launched, after the mission to Israel carried out in May in which Governor Uñac participated with the aim of seeking new strategies for the management of local water resources.

On the occasion, the provincial president highlighted the technology of the machine that generates water through the air and said that in San Juan there is a lack of this element, since less than 100 millimeters of water fall per year. Then he valued the effort made so that the machine can be in the province and assured that “we started an institutional work so that based on the results we can multiply this device in the places where San Juan needs them.”

Afterward, Ambassador Ronen explained that the machine is an example of Israel’s work. “It takes air and gives water. We have done this with many other things in Israel and we are going to cooperate with the Government of San Juan so that water management is better and that the well-being of the people of San Juan is better,” she affirmed.

In this sense and as part of the cooperation, the provincial president advanced the signing with the Israeli state company, which will provide comprehensive advice in San Juan to address the water crisis (see separate).

The production of water in the device starts with air, which is directed through heat exchange and condensed into water. Then begins the filtering phase of water, which is purified and then mineralized. A UV lamp destroys microorganisms and breaks down harmful chemicals. That water is then stored in an integrated reservoir and constantly circulated through a UV lamp, keeping it fresh and clean so it’s drinkable.

The system avoids plastic bottled water, which is harmful to the environment.

Governor Uñac announced yesterday that the signing with the state company of Water of Israel for the development of a Master Plan for Water Conservation and Management is close.

The plan, with the company Mekorot, is aimed at evaluating the current availability, losses and uses of water resources, and formulating alternative development scenarios in the province.

This tool also seeks to balance resources, identify technical regulations and operational options to close the gap between resources and demands, and also manage water to supply the amount necessary for optimum crop yield.

Attention SBI Customers! Now you will not be able to withdraw cash from ATM without OTP, know the new rule

Julio Buffarini’s funny phrase about Advíncula: “It’s better than me”